Methyldrene CLOMA PHARMA is an extremely strong preparation with a broad spectrum of activity. Each capsule is filled with MCT oil and provides unique substances whose effects have been scientifically proven. The formula of the supplement was designed to increase the process of burning fat tissue by stimulating metabolism and increasing body thermogenesis. In addition, the product contains in the composition of vitamins in the form of vitamin B6, B12 and chromium.

Anhydrous caffeine - is a form of caffeine from the group of organic compounds. It blocks the adenosine receptors in the brain, which results in eliminating the feeling of tiredness during training. Due to its thermogenic action, it effectively burns fat and improves metabolism.

Ginseng root extract - each portion is a powerful dose of ginseng being a rich source of ginsenosides, the activity of which will especially appeal to people on a diet (they redirect energy to fat tissue). Introducing it to permanent supplementation has a positive effect on the overall health of the body, reduces the accumulation of lactic acid in the muscles, which causes their pain and reduces efficiency. The substances contained in it also strengthen mental fitness is recommended, among others, during preparation for exams and for intensive mental work.

Bitter orange-bitter orange extract is not an edible fruit but it is an excellent source of vitamin C, the amount of which can reach up to 42% in the extract. Bitter oranges are much richer than just vitamin C, but also antioxidants, such as bioflavonoids, such as hesperidin. In addition to the high content of perfectly digestible vitamin C, the bitter orange is primarily known for its consistency in the synephrine plant, which is a natural substitute for ephedrine. Synephrine has a similar structure to ephedrine. It is obtained in a natural way, from immature citrus fruit, e.g. Citrus uranium L., Citrus aurantium L. This substance is a natural substitute for ephedra. Increasingly, it is added to drugs and dietary supplements intended for athletes as well as overweight people. This compound boosts metabolism, reduces appetite and at the same time increases mental and motor activity. Synephrine increases blood pressure and affects the minute volume of the heart. It widens the bronchi to facilitate breathing, effectively clears the sinuses and improves well-being.

Cayenne pepper extract - obtained with hot chili peppers; contains capsaicin (an alkaloid that acts on the vanilloid receptor). It causes the release of adrenaline and norepinephrine (catecholamines) in the adrenal medulla, and consequently the increase in metabolism and the intensification of the lipolysis process.

Ephedra Virdis - the plant contains alkaloids with a thermogenic effect, which increases the basic energy expenditure of the body causing a caloric deficit. It is thus an effective way to increase the rate of metabolism and fat burning. In addition, supplementation with green grass extracts reduces appetite, makes it easier to maintain the diet, especially during periods of low caloric intake. In addition, studies show that the plant is a source of flavonoids able to scavenge free radicals in the body.

MCT Oil PWD - a special type of easily digestible fat that is extremely fast absorbed and is an excellent source of additional energy during long-term physical exercise. The use of medium-chain triglycerides (MCT) in the daily diet significantly improves the strength and endurance of the muscles and supports the increase in their mass. Used by athletes as an alternative source of energy, it helps to protect the body's carbohydrate reserves and protect muscle proteins against catabolism.

Theobromine - a compound known from the popular yerba mate, showing diuretic action, which helps in getting rid of excess water from the body, masking the effects of reducing body fat. In this way, it directly affects the increase of the aesthetics of the body by maximizing the muscle definition. In combination with caffeine, theobromine also has a thermogenic effect, accelerating the reduction of adipose tissue.

Bacopa monnieri- plant leaf extract is found in India and known as Brahmi or Jalanimba. In India, it has been used for 5,000 years to treat such conditions as epilepsy, insomnia and as a sedative and decreasing anxiety substance. It is recommended as an effective remedy for memory and concentration. This plant is classified as adaptogenic plants, i.e. those that facilitate the adaptation of the organism to adverse environmental conditions. In addition, this raw material is used to remove heavy metals such as cadmium and chromium from the body. In the blood it acts as a chelating compound, removing excess toxic heavy metals. Water-alcohol extracts activate detoxification processes, support tissue renewal, intensify protein synthesis processes, stabilize cell membrane structure and prevent prostatic hyperplasia.
Black pepper extract - the key ingredient is piperine - it makes us sneeze, but it also affects primarily that we lose weight. Researchers conducted studies that clearly show that piperine interferes with the action of genes responsible for the formation of new fat cells. Thanks to the piperine contained in black beans, we better absorb the B group vitamins, selenium and beta-carotene. Pepper improves digestion, disinfects the urinary tract, helps fight inflammation and even reduces the sensation of pain.
Yohimbe bark extract - contains yohimbine belonging to the alkaloid group, which has stimulant properties. Selectively blocks alpha-2 adrenergic receptors, causing the adrenaline and noradrenaline targeting to stimulate lipolysis - the process of triglyceride decomposition to fatty acids and glycerol, which can be included in this form for energy generation processes.

Methylosynephrine - is a very strong stimulant, sympathomimetic stimulating the sympathetic nervous system. The substance builds up and acts reminiscent of adrenaline and norepinephrine and as it exerts a multidirectional effect on the body's functioning. Its essential action affects the increase of physical fitness through bronchial dilation, acceleration of breath and increase in muscle oxygen consumption. It is also used to reduce body fat due to its strong lipolytic activity.
Bauhinia purpurea L - extract has adaptogenic, antioxidant and anti-inflammatory properties. The plant is anti-depressant and calming. It also has the potential to stimulate the creation of new proteins. Its main action is to improve memory and concentration, stimulate the formation of new nerve connections and help in cell regeneration.

Vitamin B6 - is a coenzyme of many enzymatic changes in the body including transamination and decarboxylation of amino acids. Particularly important is its participation in the transformation of tryptophan, which produces serotonin and nicotinic acid. It is essential in the process of phosphorylation, affects glycogenesis and glycogenolysis in muscles, plays an important role in immune and hematopoietic processes. It reduces the secretion of prolactin, which has a negative effect on men's libido. Symptoms of pyridoxine deficiency are nonspecific: skin lesions, inflammation of the tongue and oral mucosa, seizures, microcytic anemia non-pigmented or megaloblastic, polyneuritis, depression. Its lack may favor the development of oxalate urolithiasis. Pyridoxine is well absorbed from the gastrointestinal tract. Her excess is excreted in the urine.

Vitamin B12- is a vitamin responsible for the proper functioning of the nervous system, it also takes part in the metabolism of proteins and fats and contributes to the proper level of homocysteine, supporting the circulatory system. It stimulates the production of serotonin - a neurotransmitter responsible for a good mood. It also acts directly on the brain cells, protecting them from toxins.

Chromium -is a very important mineral component responsible for body weight control and proper functioning of metabolism. This essential ingredient plays a key role in losing weight and in cardiovascular health. Research suggests that chromium picolinate may help to reduce body fat as well as increase lean body mass, which makes it especially popular as an addition to those who want to be fit.

One capsule 1 - 2 times a day, in the morning and / or half an hour before training 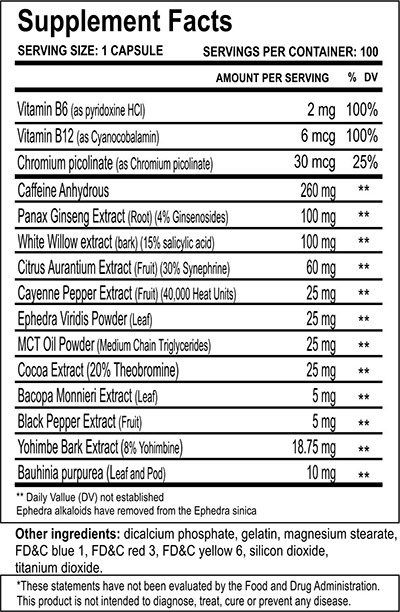