Insane Labz Psychotic is a unique pre-workout supplement with the strongest stimulating properties, designed for advanced individuals looking to take their workouts to the next level. It contains the patented ingredient AMPiberry enabling you to achieve full focus, concentration and inexhaustible energy for hours.

Beta-Alanine - a non-protein amino acid, the alpha-alanine constitutional isomer, necessary in the synthesis of pantothenic acid, coenzyme A, balenin, anserine or carnosine. It is a limiting compound, and thus after the external administration of the increasing concentration of carnosine (β-alanyl-L-histidine), whose activity is mainly responsible for the effects of beta-alanine supplementation. Carnosine is above all a strong, multidirectional antioxidant compound. Due to the imidazole ring contained in its structure, it is an electron donor capable of stopping the process of lipid peroxidation, singlet oxygen quenching and peroxide stabilization. Carnosine chelates copper and iron and blocks the production of hydroxyl radicals. By binding covalently to lipid degradation products, it breaks the uncontrolled chain reaction of fat oxidation. Carnosine, apart from its antioxidant properties, is able to lower the degree of acidification of the body by removing hydrogen ions from the body. The effect of Carnosine, and thus indirectly beta-alanine, allows you to increase strength and speed. In addition, beta-alanine by discharging the nerve receptors induces a tingling sensation that motivates action.

Creatine Monohydrate - a hydrated form of creatine, a non-protein compound naturally synthesized in the human body due to the methylation of glycocyamine. It enables the storage and transport of phosphate groups necessary for the production of high-energy compounds, including adenosine-5'-triphosphate (ATP), which ensures the supply of energy to working and regenerating muscles. It supports the accumulation of glycogen. Increases the storage of water, the presence of which is required for the course of numerous biochemical reactions. It has antioxidant properties that reduce oxidative stress caused by excessive training intensity.

Caffeine - 1,3,7-trimethylxanthine, a compound belonging to purine alkaloids found in selected parts of some plants associated with excitatory activity, especially coffee seeds. As a selective antagonist of A1 and A2A adenosine receptors, by increasing the amount of some neurotransmitters, particularly acetylcholine, noradrenaline and dopamine, it leads to improved concentration, reduced pain and increased willingness to act. By lowering the phosphodiesterase activity, cAMP reduces the rate of degradation of 3 ', 5'-cyclic adenosine monophosphate (cAMP), maintaining the correspondingly high neuronal excitability required to maintain full clarity of thought. Increased concentration of cAMP intensifies the degradation of glycogen and triglycerides, enhancing the availability of energy substrates required for the course of thought processes and other processes, including those related to the physical activity of the body. Caffeine causing the reduction of the negative electrical potential of the internal mitochondrial membrane and inducing the formation of uncoupling proteins (UCP), enhances thermogenesis by increasing the burning of released energy substrates, helping to maintain normal body mass.

Hordenine - being a selective, irreversible inhibitor of monoamine oxidase B (MAO-B), can inhibit the deamination of: dopamine, serotonin and phenylethylamine; thus increasing their concentration and intensifying effects caused by them. As a norepinephrine reuptake inhibitor, it increases its concentration, indirectly affecting the sympathetic nervous system. Increasing the survival and activity of selected neurotransmitters reduces drowsiness and anxiety and promotes the improvement of: well-being, the course of thought processes and the effectiveness of the activities performed. By increasing systolic and diastolic blood pressure and increasing the volume of peripheral blood flow, it increases the activity of the cardiovascular system, promoting the transport of nutrients and oxygen in the body.

AMPiberry® - a proprietary name of the product developed on the basis of fruit juniper (Juniperus communis L.) fruit extract, an evergreen tree of the Cupressaceae family, covering abundantly areas of the globe with a cooler climate, especially the mountainous area of ​​Himachal Pradesh located in India. Due to the direct antioxidant and indirect properties caused by increasing the concentration of superoxide dismutase, catalase and glutathione peroxidase, it has an anti-apoptotic effect in the nervous system. It reduces inflammation and reduces the feeling of pain, including the headache. By interfering with neuronal excitability, it reduces the feeling of tiredness and discouragement, motivating the body to continue working. It shows the synergy of action with caffeine.

Extract from Rauwolfia vomitoria (90% rauwolscine) - root extract Rauwolfia vomitoria, plants from the Apocynaceae family, a shrub that naturally grows on tropical regions of Africa, brought to other continents, including Asian. It has antioxidant, anti-inflammatory and analgesic properties, supports carbohydrate-insulin metabolism, counteracts cancer and improves mental health. High standardization of the rauwolscine extract, in other words, yohimbine or isohimine, focuses the action of the product on the nervous system and the loss of unnecessary body mass. Inhibiting the work of the cholinergic system, it increases the concentration of adrenaline, stimulating the body to act and intensifying the lipolysis process. By decreasing α2-adrenergic receptor activity, it increases adenylyl cyclase and cyclic adenosine-3 ', 5'-monophosphate (cAMP), enhancing the oxidation of fatty acids in the mitochondria. It promotes the burning of previously accumulated adipose tissue in areas of the body rich in α2-adrenergic receptors, mainly the lower abdomen and on the hips. 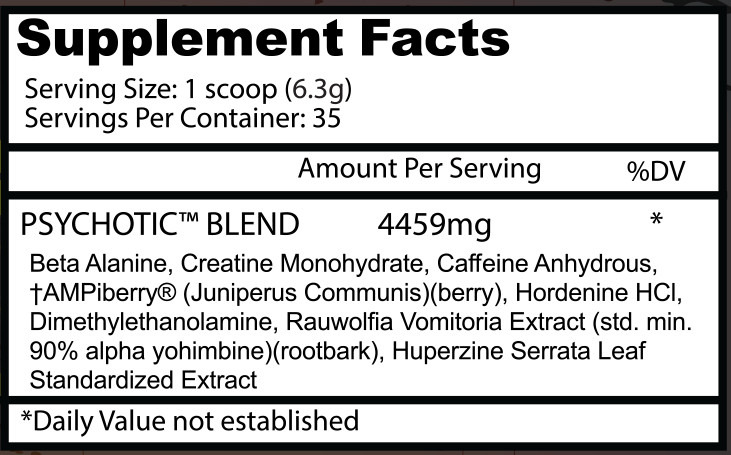 Users reviews
Number of reviews: 1 Average score: 5.00
Score:
Author: Stanislav, Uttran
It works like hell.very good focus and everything you need.
To rate this product or to add a new review, you need to log in.
Recommended