Black Spider is a product containing in its composition a proven mix responsible for reducing appetite, while not having a negative impact on muscle tissue or vascularisation. The combination of Ephedra extract, caffeine and Yohimbe makes Asia Black a top product, which, according to the recommendations, is unmatched compared to other traditional smokers.

2-Amino-6-methylheptane (DMHA) - Is a stimulant that has other names such as 2-aminoisoheptane or octodrine. DMHA has a relaxant effect on the bronchi, thanks to which our aerobic capacity increases, moreover it has decongestant activity (narrowing blood vessels, causing an increase in the oxygen flow rate), does not cause "stupor" and sharpens the senses that could not always be experienced with dmaa.

Yohimbe Extract (8% yohimbine) used to reduce body fat due to its lipolytic properties. It is a blocker of α2-adrenergic receptors, thanks to which it is possible to obtain energy more efficiently with the help of free fatty acids accumulated in the cell, and this accelerates the slimming effect. Its special feature is getting rid of fat from the most resistant places, such as the stomach, thighs or buttocks. In addition, it should be added that yohimbine enhances sensation and sexual performance and increases libido.

Cayenne Pepper is one of the best natural remedies for weight loss. It has been proven that the use reduces the appetite speeds up the metabolism up to 25%, contributing to faster burning of calories. Capsaicin - the main active ingredient of pepper - is responsible for such action. An additional advantage of the application is a positive effect on the overall health, and the advantages include: increased blood flow, increased sex drive, ulcer reduction, improved digestion and impact on maintaining adequate blood pressure.

Extracts of green and black tea are rich sources of powerful antioxidants called polyphenols. Green tea contains a greater amount of epigallocatechin gallate (EGCG), which antioxidant effects are even 100 x stronger than vitamin C. In combination with other ingredients of the supplement, these extracts promote fat loss.

Panax Ginseng in medicine used for thousands of years as a panacea and a recipe of longevity. Thanks to the content of many active compounds (triterpene saponins, panaxes and ginsenanams, sterols, polypeptides, amino acids, fatty acids and their glycerides and mineral compounds), it has a very wide range of applications. Its main properties can include: eliminates excessive stimulation caused by the intake of stimulants, increases physical efficiency, supports the immune system and contributes to maintaining the body's health.

Ginger Root is a source of biologically active compounds called gingerolami. These substances have antioxidant properties, have anti-inflammatory, warming, regulate the functioning of the gastrointestinal tract and exert a beneficial effect on the functions of the cardiovascular system. 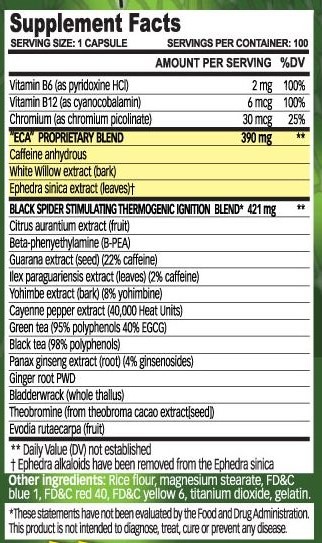 Users reviews
Number of reviews: 1 Average score: 5.00
Score:
Author: Jurgen, Berlaar
The second best for energy, i like the powder version more. But it's not in stock
To rate this product or to add a new review, you need to log in.
Recommended