Insane Labz Psychotic Black is a new pre-training formula of the American manufacturer with a stimulating effect.

Psychotic BLACK is perfect for athletes who need a large dose of energy during intense workouts. The stimulating formula enriched with ingredients that intensify the muscle pump and focus will delight athletes expecting full training support, from mental to the benefits associated with the muscular appearance of the figure.

Creatine Monohydrate - a hydrated form of creatine, a non-protein compound naturally synthesized in the human body as a result of glycocyamine methylation. It enables the storage and transport of phosphate groups necessary for the production of high-energy compounds, including adenosine triphosphate (ATP), which provides energy to working and regenerating muscles. Supports the accumulation of glycogen. It increases the storage of water, the presence of which is required for the course of numerous biochemical reactions. It has antioxidant properties that reduce oxidative stress caused by excessive training intensity.

Beta Alanine - belongs to organic chemical compounds from the group of amino acids, the structural isomer of alpha-alanine, i.e. the basic protein amino acid. It belongs to the so-called β-amino acids in which the amino group is on the β carbon with respect to the carboxyl group. β-alanine is a component of the carnosine dipeptide (β-alanyl-L histidine), the biosynthesis of which depends on the availability of β-alanine as a substrate. Carnosine buffers the drop in pH associated, among others, with with the formation of lactic acid in the muscles during exercise. Therefore, taking β-alanine reduces physical decline.

Taurine - this amino acid increases the endurance of the body and counteracts the symptoms of fatigue, and also improves our concentration. Taurine enables faster and more effective post-workout regeneration. Another important feature of this amino acid is that it reduces the negative effects of stress while we are on reduction and following a low-carbohydrate diet. Taurine is also anti-catabolic and supports the transport of creatine.

AMPiberry - a proprietary name of a product developed on the basis of the fruit extract of Juniperus communis L., an evergreen tree from the Cupressaceae family that grows abundantly in areas of the globe with a cooler climate, especially in the mountainous area of ​​Himachal Pradesh located in India. Due to direct antioxidant properties and indirect ones caused by increasing the concentration of superoxide dismutase, catalase and glutathione peroxidase, it has an anti-apoptotic effect in the nervous system. It reduces inflammation and reduces the feeling of pain, including headache. By interfering with the neuronal excitability, it reduces the feeling of fatigue and discouragement, motivating the body to continue working. It shows synergism of action with caffeine.

Di-Caffeine Malate - stimulates the central nervous system and vegetative centers: respiratory, vasomotor and vagus nerve. It also has an excellent thermogenic effect and converts calories into heat, significantly increasing the metabolic rate. It evenly stimulates the cerebral cortex, which means increasing thinking efficiency and preventing fatigue. It lowers the risk of liver and colon cancer, and stimulates the release of fatty acids into the bloodstream, which is why it is considered one of the ingredients that accelerate weight loss.

Caffeine Citrate - Caffeine citrate has recently gained popularity in the fitness community because it raises blood levels of caffeine faster than other sources of caffeine. 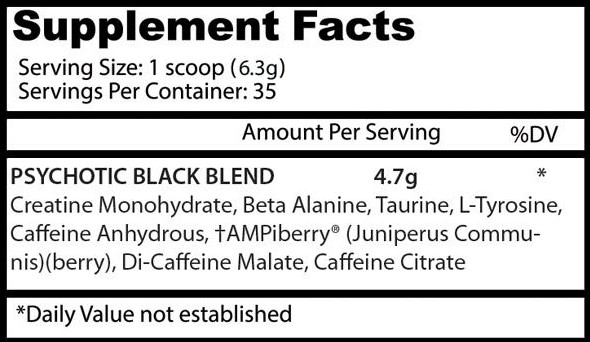