Gold Psychotic is the latest improved version of the cult pre-training supplement Psychotic. Gold Psychotic is a pre-workout supplement that has been designed using tried and tested, but also innovative ingredients not found in any other supplements of its kind. The aim of Gold Psychotic is to increase endurance, strength and add pure energy with maximum focus and concentration. The formula combines substances that increase training endurance and add a huge dose of energy.

The new formula has been supplemented with ingredients that increase nitric oxide production such as agmatine and L-citrulline, which will pump your muscles to the limit. Gold Psychotic contains the most powerful combination of adrenaline-boosting ingredients ever. Psychotic is the only pre-workout supplement that uses a clinically developed dose of Olivox, which increases the body's t3 levels to crank your metabolism to the limit.

The ingredients in Gold Psychotic include:


Citrulline Malate 2: 1 - Participates in the synthesis of nitric oxide (NO) and phosphocreatine and glucose glucose metabolism, thereby increasing the uptake of oxygen, glucose, amino acids and creatine and energy production through muscle cells. Reduces the concentration of lactic acid and ammonia in the muscles, allowing the body to recover energy faster by increasing the level of creatine phosphate and resynthesis ATP. Citrulline malate is a much more effective form than high doses of arginine, as it is its precursor. At the same dose as arginine is more effective in increasing its amount in the body than arginine alone.

Agmatine - increases blood flow, supporting the process of "cleansing" of working muscles. In every cell there is a specific exchange of oxygen and nutrients for carbon dioxide and harmful metabolic products that the body has to remove, and due to the increased blood flow, such exchanges take place faster so that the cells of muscle tissue can work longer and harder. Arterial blood contains essential muscle oxygen and provides nutrients such as amino acids, sugars, creatine, arginine from the outside. Thanks to the action of nitric oxide, the transport of the body is more efficient, thanks to which not only the cells receive nutrients but also the harmful metabolic products are removed more quickly.

DMAE (dimethylaminoethanol, dimethylethanolamine, deanol) - an intermediate in endogenous choline synthesis structurally similar to it. It is classified as a nootropic substance and drugs stimulating the central nervous system (CNS), but its stimulating properties are quite mild. Increases acetylcholine synthesis, improving neuronal transmission in the cholinergic system.

Citrate Caffeine - the most-known stimulant compound in the world. It has a stimulating effect, lowers the level of Adenosine, inhibits the breakdown of cAMP.

Ampiberry - a proprietary name of the product developed on the basis of Juniperus communis L. fruit extract, an evergreen tree from the Cupressaceae family that grows abundantly around the globe with a cooler climate, especially the mountainous area of ​​Himachal Pradesh located in India. Due to the direct antioxidant and indirect properties caused by increasing the concentration of superoxide dismutase, catalase and glutathione peroxidase, it has an anti-apoptotic effect in the nervous system. It reduces inflammation and reduces the feeling of pain, including the headache. By interfering with neuronal excitability, it reduces the feeling of tiredness and discouragement, motivating the body to continue working. It shows the synergy of action with caffeine.

Rauwolfia Vomitoria Extract (Alpha Yohimbine Rootbark) - It shows antioxidant, anti-inflammatory, analgesic, carbohydrate-insulin-promoting properties, counteracting cancer and improving mental condition. High standardization of the rauwolscine extract, in other words, yohimbine or isohimine, focuses the action of the product on the nervous system and the loss of unnecessary body weight. Inhibiting the work of the cholinergic system, it increases the concentration of adrenaline, stimulating the body to act and intensifying the lipolysis process. Strengthening the oxidation of fatty acids in the mitochondria. It promotes the burning of previously stored adipose tissue in areas of the body rich in α2-adrenergic receptors, mainly the lower abdomen and on the hips. 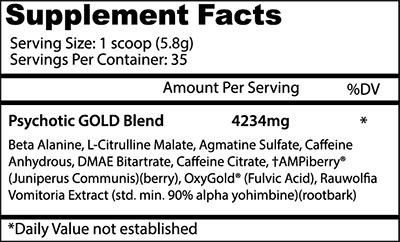 Users reviews
Number of reviews: 3 Average score: 4.67
Score:
Author: Adam, Genk
Good pre workout, on a scale of 1 to 10, i'd give a 7 of this pre workout
Score:
Author: Emiliano, Castel D'Aiano
The product is really strong
Score:
Author: Marcin, Wrocław
the first version was good but the gold version was definitely better
To rate this product or to add a new review, you need to log in.
Recommended