Fury perfectly supports muscle strength and endurance. Minimizes post-exercise catabolism, and a high dose of caffeine allows a surge of training energy. Genius Nutrition Fury Extreme based on the latest solutions contains a set of essential, fermented amino acids, citrulline in the form of malate, creatine, as well as Beta Alaninine Carno-Gen ™. The ideal proportion of ingredients works comprehensively to support daily workouts.

Citrulline Malate - participates in the synthesis of nitric oxide (NO) and phosphocreatine and oxygen glucose metabolism, thereby increasing the uptake of oxygen, glucose, amino acids and creatine and energy production through muscle cells. It reduces the concentration of lactic acid and ammonia in the muscles, thanks to which it allows the body to recover energy faster by increasing the level of creatine phosphate and ATP resynthesis. Citrulline malate is a much more effective form than high doses of arginine, as it is its precursor. At the same dose as arginine, it is more effective in increasing its amount in the body than arginine alone.

Beta Alanine - the main function that this amino acid performs is not an increase in the volume of muscle cells, but an increase in the level of carnosine in the muscles. Effect? Both during aerobic and anaerobic efforts, the acidification process of skeletal muscles is significantly slowed down. In practice, this translates into harder, more intensive and more effective workouts. Both endurance and muscle power increase.

Creatine HCL - pure creatine hydrochloride without any unnecessary flavor additives, dyes or preservatives. It is a highly efficient form of creatine, which helps to increase physical performance, strength and muscle mass. Recommended for athletes and active people looking for an effective creatine supplement during the period of building the top form, which can be used even immediately before the competition because it does not cause subcutaneous water retention.

Taurine - a free amino acid that supports the health of the entire body and helps create new brain cells in the area related to learning and memory.

Acetyl L-Tyrosine - is an acetylated derivative of the amino acid L-tyrosine. Plain L-tyrosine is less stable and also less soluble in water, which can lead to reduced bioavailability. Acetylation increases the solubility and stability of some amino acids. N-acetyl-L-tyrosine supports brain function by supporting the synthesis of norepinephrine and dopamine (neurotransmitters) catecholamines.

L-Leucine - affects the synthesis of skeletal muscles in several ways: increases the secretion of insulin, a powerful anabolic present in our body, affects the activity of the protein kinase S6, accelerates the phosphorylation of eIf4E binding protein and affects the degree of binding between proteins (eIF) 4E and eIF4G. All this, despite the complicated sound and naming, boils down to a very simple theorem - Leucine increases the degree and speed of using proteins to build muscle.

L-Isoleucine - supplying large amounts of leucine causes a decrease in the level of the other two amino acids: Isoleucine and Valine, so it is so important to use all three compounds together. In addition, isoleucine is classified as glucogenic amino acids, i.e. those that the body can easily and quickly transform into the energy it needs. This means that we will be able not only to train longer and harder, but also to recover faster.

L-Valine - its presence in this combination, owes not only to the aforementioned need to administer all three BCAA amino acids together, but also to reduce fatigue in the central nervous system. In addition, as with the other two amino acids, it is easily converted into energy consumed by working muscles and thus saves the glycogen stores accumulated in the liver.

L-Phenylalanine - often an underestimated component of proteins, which is widely used both in the context of body development and anabolic processes, as well as improving focus, coordination and muscle sensation. The right dose of this compound significantly contributes to a more efficient work of the nervous system.

Neuro Stim Blend - a mix of stimulating and nootropic ingredients obtained from schisandra, cayenne pepper and bitter orange fruit. The blend of ingredients has a positive effect on concentration, increases energy and promotes cognitive function.

Mix 2 scoops of Fury Extreme and 350 ml of water, consume 5 minutes before training on an empty stomach. 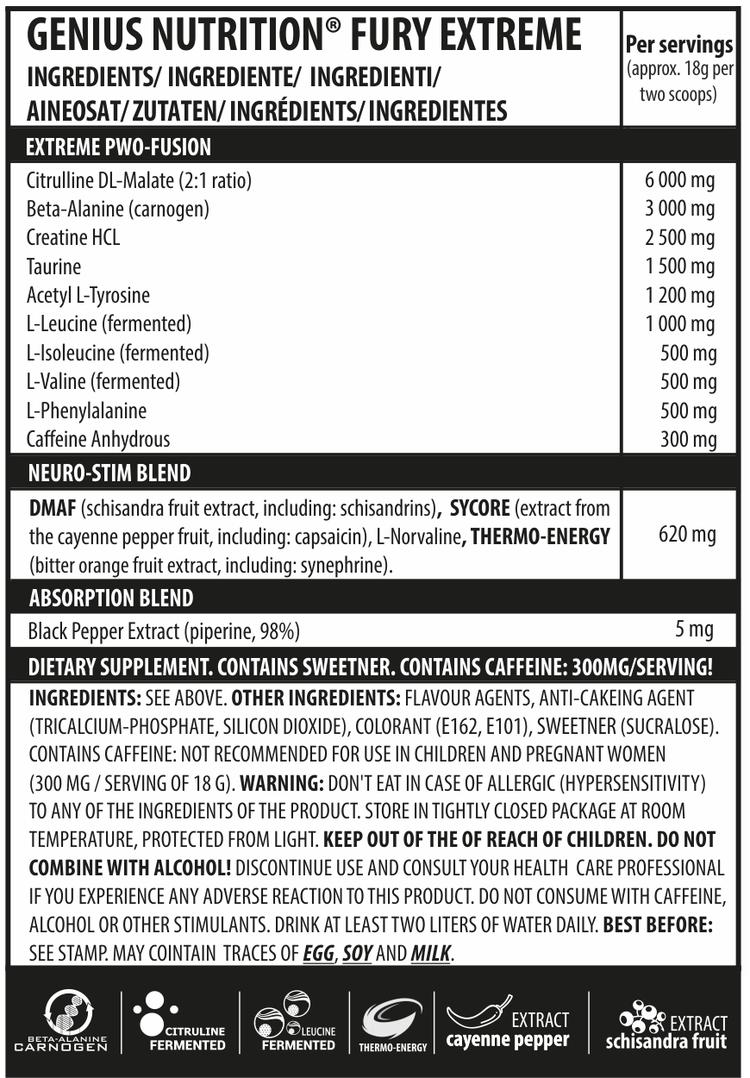