Among the manufacturers of dietary supplements there is a kind of race, who will propose a more innovative, mysteriously called active ingredient. This rush often promotes substances with negligible activity, poorly or not tested on humans at all. The producer of this supplement, Insane Labz, decided to break this trend and create a mix based on well-known ingredients, focusing on the use of their optimal portions and obtaining the highest quality raw materials. In this way, a comprehensive formulation with a certain effect was achieved. The product consists of:

Beta-Alanine - an amino acid which is a precursor of carnosine, a compound that is responsible for the activity of beta-alanine in the body. Carnosine acts as a buffer for the acid-base environment. With regard to exercise capacity, this is important in situations of prolonged skeletal muscle strain. Then, there is an increased release of lactic acid, which causes pain to limit physical fitness. Increased carnosine distribution in the body allows to neutralize the action of lactic acid, delaying the onset of fatigue symptoms. By optimizing the pH in myocytes, beta-alanine supplementation also has a positive effect on the rate of regeneration processes.

L-Tyrosine - a broad-spectrum amino acid that results from its role as a precursor of many biologically active substances. The stimulating effect is due to the presence of adrenaline and noradrenaline on the pathway. Increasing the supply of substrate for their production promotes their synthesis, directing the body to a state of increased physical fitness.
Tyrosine is also a precursor of dopamine, which in two ways affects the body's ability. First, it is responsible for correct neuromotor coordination, allowing to maintain high quality of traffic. Second, it is present in the so-called motivation center, promotes positive emotional states, can increase cognitive ability.
In addition, tyrosine is present in the synthesis pathway of thyroxine and triiodothyronine, hormones produced by the thyroid gland. Their secretion is associated with an increased rate of metabolism.

L-Taurine - an amino acid whose particularly high concentrations are noted in highly developing organisms. Affects cognitive abilities, it is often recommended as an effective form of support for learners. It improves mental functions, it also has a positive effect on the mood. The effectiveness of taurine in this field is so important that it is recommended as one of the means to eliminate discomfort caused by excessive alcohol consumption.
Increased supply of taurine also promotes an efficient energy management of the body. This amino acid acts as a creatine transporter, which stimulates the acquisition of energy from phosphagen, a mechanism that prevails during strength, interval and sprint training.

Caffeine - alkaloid with high efficiency in the stimulation of body functions. For maximum performance, in the preparation we find two forms of caffeine: anhydrous and dicofein malate.
This alkaloid is a competence inhibitor of adenosine, a neurotransmitter responsible in the human body for fatigue signaling. It limits its accessibility to its receptors by binding to them without activating them. This allows you to reduce the feeling of fatigue and maintain a high level of physical and mental fitness.
In addition, caffeine is also a cAMP-phosphodiesterase-competent competitor, an enzyme that breaks down cyclic adenosine monophosphate to its inactive form. It positively influences the concentration of cAMP in the cell, which increases the rate of its metabolism. In addition, cAMP promotes the effectiveness of adrenaline, which enhances the stimulating effectiveness of caffeine in the human body.

L-carnitine tartrate - a highly-absorbed form of L-carnitine, a compound commonly used to increase weight-loss efficiency. The carnitine shows its activity in this field as a transporter for fatty acids. It promotes their transfer to the mitochondria, where they can be used in the process of beta-oxidation to obtain energy. However, this efficiency is not limited to increasing the rate of body fat reduction, but it also has a beneficial effect on the energy efficiency of the body by increasing mitochondrial efficiency. This has a particular impact on the promotion of physical endurance.

AMPiberry® - legally protected extract of common juniper berries, which is effective as an antioxidant. It promotes the functions of superoxide dismutase, reducing the amount of free radicals in the body. In this way, it positively influences the regenerative abilities of the organism and protects the cells from directing them to apoptosis. This extract also has a positive effect on the absorption and effectiveness of the compounds with a stimulating effect, promoting the effect of the supplement. It exhibits special synergy in combination with caffeine.

OXYGOLD ™ - registered name of fulvic acid, which has the ability to increase energy levels. It promotes the functioning of cells under stress. It also acts as a protection against them, showing antioxidant activity. Fulvic acid is also indicated as a means of reducing some types of pain and promoting cognitive skills.

Extract Rauwolfia Vomitoria - source of yohimbine, an active substance that is an agonist of alpha-2-adrenergic receptors. It affects the increase of adrenaline secretion in the body, which has a beneficial effect on physical fitness. It also has strong lipolytic properties, it is used to support weight loss, especially because of its unique ability to accelerate the rate of fat reduction from the so-called "Resistant sites", i.e. the abdomen, thighs and buttocks. In addition, yohimbine is a strong aphrodisiac, stimulates sex drive and supports sexual performance. 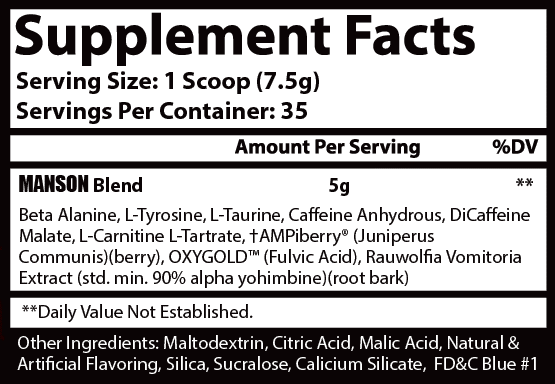