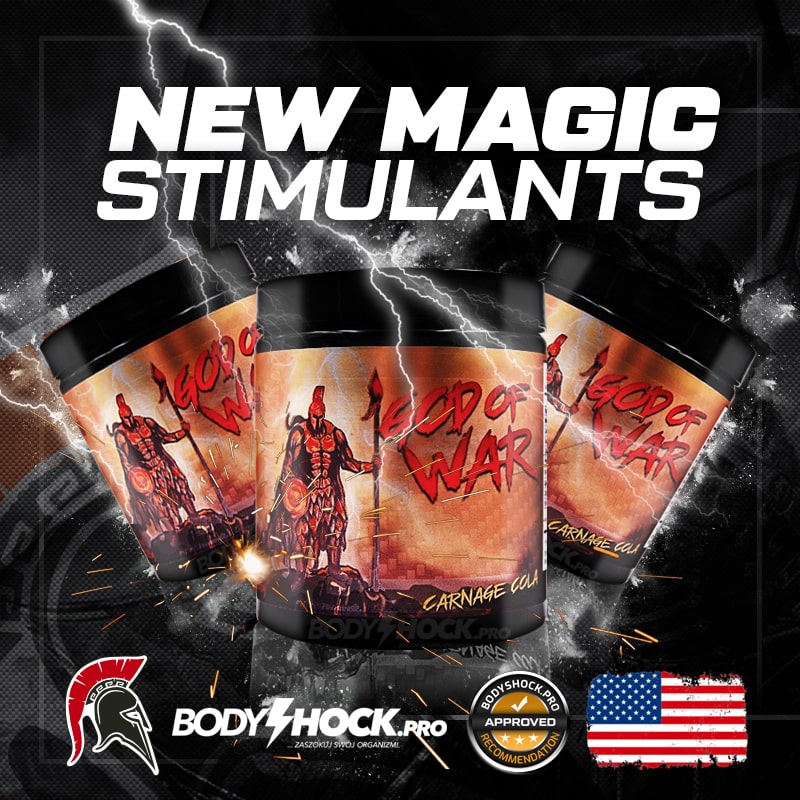 The market for the strongest supplements in the US is currently experiencing a real metamorphosis. As the access to preparations from DMAA in the US in 2018 has been limited and the availability of the raw material is getting smaller, the largest supplement manufacturers have been eagerly looking for new stimulants that will replace the work of geraniums.

Anyone who has been in contact with products based on 1,3 dimethylamylamine knows that for a long time the substance has enjoyed great interest among athletes from the US, later in Europe, including Poland. Currently, you will find supplements from DMAA only in a few stores, and their availability is very limited, resulting simply from the lack of raw material for production. In 2018, the largest producer in the USA completely withdrew from the use of this product replacing it with other equally strong stimulants.

It is important to know that in addition to the benefits, the substance also has side effects that are not well known. Geranium is suitable for temporary use because, with prolonged use, we can notice a reduction in the effectiveness of supplementation and the increase of undesirable effects.

A strong stimulant does not allow the use of DMAA late in the evening, therefore, people training in the afternoon should not use supplements containing geranium. Are you sensitive to stimulants? Do you feel the effects of ordinary coffee or energetics? Forget about DMAA in that case. It's really strong stimulants and is intended for advanced users who tolerate psychoactive substances well.

Another reason for looking for an alternative to 1.3 dimethylamylamine were mood swings and libido problems, which was particularly troublesome for the young, who mostly lead an active sex life. In addition, inhibition of appetite after DMAA was given to people on the cycle focused on muscle mass. Not even mentioning the accompanying after-workout breakdown.

A breakthrough product was God of War, created by a group of experts from Centurion Labz, headed by dr. Puccio - a certified physician receiving patients in New Jersey and Pennsylvania.

An unusual formula based on new generation stimulants from the very beginning has aroused the confidence of users. People using the epochal pre-workout quickly verified its operation, which turned out to be quite a surprise. The new God of War pre-season is very popular in the US, and we are pleased to provide the latest facts about its use.

Due to the fact that we like only exceptionally effective products, with the highest quality ingredients, we decided to try the product so praised before launching the offer. Our team includes both heavy weight training and endurance sports fans, including long-distance runners. What astonishment our team took in when we started to share our experiences after using the product. Honestly, we expected a good performance but the effect really exceeded our wildest expectations.

Despite the fact that every one of us is a fairytale, we all noticed really strong (!) Stimulation, without the feeling of unpleasant reunion. Pre-workout does not affect sleep, insomnia does not bother, stimulating activity goes smoothly and in stages. In the morning we woke up calm and refreshed

Lack of tiredness, reduced pain threshold, strength and power to do heavy workouts.

As not every one of us depends on obtaining a muscle pump, the lack of pompers did not affect the effect of the preparation. It is known that more muscles require greater oxygen supply, therefore people in our endurance sports group did not despair because of the lack of pumping substances in the composition. Colleagues who train intensively in the gym lack of pompers successfully supplemented with the addition of pure agmatine that perfectly matches God of War.

No appetite problems that accompany products containing DMAA in the composition.

The product noticeably shortens the period of post-training regeneration and reduces the acidification of the body caused by intense effort, both during its duration and during the rest of the day.

OVERVIEW OF GOD OF WAR

The latest stimulant isolated from the orchid Eria jarensis. While the half-life of PEA is 5-10 minutes, the activity in the brain of N, N-dimethylphenylethylamine persists even after 120 minutes. The methyl groups make the molecule more soluble in fats, which allows for greater ability to cross the blood-brain barrier.

It works mainly on:

The TAAR1 receptor participates in the regulation of monoamine transporters and neuronal regulatory mechanisms that modulate dopaminergic activity. It plays a significant role in the regulation of neurotransmission in dopamine neurons, norepinephrine and serotonin. In addition, the researchers found that the TAAR1 agonist prevents over-eating unhealthy meals, including sweets, and can reduce the behavioral effects of drug abuse.

MAO-B inhibitors - increase in the concentration of dopamine, its better use. It affects the increased coordination and tension of the muscles, evokes a feeling of euphoria and contentment, which motivates them to perform trainings.

It is necessary for the production of carnosine and blocks building proteins that help prevent the aging of the body. The compound supports the proper functioning and development of muscles. Amino acid is known for reducing muscle fatigue, which can help your muscles work better during training. This in turn promotes muscle growth. Beta-Alanine is particularly helpful in intensive short-term training such as weight lifting. Some people taking beta-alanine may notice a slight tingling sensation known as paraesthesia. A tingling arises because beta-alanine dilates blood vessels, allowing more oxygen and blood to be delivered to the muscles.

Creatine monohydrate is one of the most researched forms of creatine in the world and has been thoroughly proven and ethically proven in many performance studies, including physically active people as well as recreational athletes. Creatine monohydrate is ideal for a wide range of male and female athletes; from bodybuilders through the entire range to sprinters. The ingredient is completely safe and has been scientifically proven to increase physical fitness in the subsequent short-term, high-intensity exercise series, which makes it ideal for those who participate in sports activities such as powerlifting, running or rugby.

It affects the processes of digestion, helps in maintaining a healthy cardiovascular system, evens out blood pressure, removes toxins, promotes mental functions, prevents the aging of cells. It is particularly effective for bodybuilders, improving muscle performance, increasing vascularity and stimulating muscle growth. Due to the anti-catabolic effect, it prevents the use of muscles during training. The human body naturally produces the amino acids necessary for many vital functions of the body. Taurine is naturally produced by the organism, it also comes from meat and seafood. It is a key precursor to the proper growth of muscle mass and improves muscle endurance during exercise.

It shows a thermogenic effect and suppresses appetite due to the increase in the production of adrenaline and norepinephrine. It has been proven that it causes the formation of such neurotransmitters as dopamine, acetylcholine or even serotonin in the central nervous system, which exerts a stimulating effect and increases cognitive functions. The overall activity of caffeine on the body, allows you to maintain the effectiveness of training and maintain a positive mood, despite the calorie deficit.

Phenylethylamine is a component with a broad spectrum of activity. The main ones include: increasing cognitive skills, improving mood, losing weight and improving concentration. The neuromodulator's operation is attributed to it. It is an organic chemical compound of amines, a natural monoamine neurotransmitter. In the brain, it causes the release of norepinephrine and dopamine - two very strong neurotransmitters responsible for vigilance and attention.

The γ-aminobutyric acid occurs as an organic chemical compound from the group of amino acids, which acts as the main neurotransmitter with inhibitory activity in the entire nervous system. It affects not only muscle building, but also facilitates falling asleep, relieves anxiety, relaxes and calms. GABA acts on the nervous system, raising the threshold of excitability of nerve cells and thus limiting their sensitivity to stimuli. GABA causes relaxation, calming, and - due to the increased release of endorphins - a general improvement in well-being and a better mood.

It is a substance necessary for the proper functioning and construction of every cell of our body. It occurs in the body in compounds called phospholipids, the most-known of them and the most-occurring is lecithin. Phospholipids perform a lot of functions in our body, build cell membranes and function as relays in the nervous system (most likely they participate in the "creation" of memory). An important function of choline is its participation in the transport and metabolism of cholesterol and other fats - it reduces their deposition in the vascular wall and gallbladder, and also affects the liver (also reducing fat deposition) and kidneys (regulates the amount of urine excreted).

It is a natural compound of phenylethylamine, which is present in small amounts in various plants. This supplement works primarily through the release and protection of norepinephrine, which translates into increased metabolism, energy supply as well as a decrease in appetite. Users use hordenine for three main effects: fat loss, appetite control and energy boost.

It is one of the most important water-soluble vitamins. It plays an important role in the formation of collagen, which is about 1/3 of the total amount of protein in our body. It is the basis for building the skin, bones, cartilage, tendons, blood vessels and valves in the heart. Ascorbic acid is a powerful antioxidant, accelerates the breakdown of harmful substances formed under the influence of intense training, effectively protects against infections. Another advantage of this vitamin is the improvement of iron absorption and the improvement of oxygen transport to the cells, which translates into an improvement in muscle condition. The effective absorption of oxygen extends the working time of the muscles and delays the anaerobic breathing phase of the muscles causing the formation of sourdough. In addition, vitamin C effectively leaches lactic acid from the muscles and thus speeds up the regeneration process after training. In addition, ascorbic acid affects the release of male hormones, including testosterone, which is desirable by athletes.

In our humble opinion, God of War removes the preparations from DMAA from the podium due to not only the lack of side effects during use but also the universality of use. It is recommended not only for bodybuilders but also for runners, crossfit players, basketball players, skiers, swimmers and other competitors performing forcing workouts.

It's really worth trying new stimulants because you can be pleasantly surprised, and instead of waiting a few years for feedback from users over the ocean at this time, you can already get impressive results and make real progress.

It is worth to go with the times and not limit ourselves only to known, liked substances, because as it turns out, there are already new, more powerful ones with limited side effects. It is known that many people do not tolerate DMAA in pre-workout so new stimulants become a really remarkable alternative that is a tunnel in light for all demanding athletes.