The Viper Hyperdrive® fat burner mimics the action of endogenous catecholamines such as epinephrine, noradrenaline and dopamine. Studies show that Acacia Rigidula extract is currently the most effective metabolic stimulator. The burner perfectly increases stimulation of beta-2 receptors, promotes a significant increase in resting energy expenditure. The Explotab® technology used ensures high absorption of active ingredients, rapid increase in energy and thermogenesis. 5-methoxytryptamine in the Viper Hyperdrive® supplement effectively reduces appetite by increasing the amount of serotonin in the brain.

Acacia Rigidula Extract - is a source of phenylethylamine, a compound that is structurally similar to amphetamine, produced naturally in mammals from phenylalanine, as well as bacterial and fungal plants. It plays the role of a neurotransmitter in the central nervous system. By binding to TAAR1 receptors which leads to inhibition of serotonin, dopamine and norepinephrine feedback. Beta phenylethylamine effectively raises the mood and causes a feeling of euphoria.

Citrus Aurantium Extract - bitter orange is not an edible fruit but it is an excellent source of vitamin C, the amount of which in the extract can reach up to 42%. Bitter oranges are much richer not only in vitamin C but also in antioxidants, e.g. bioflavonoids such as hesperidin, compared to regular oranges. In addition to the high content of perfectly absorbable vitamin C, bitter orange is primarily known for its compactness in the synephrine plant, which is a natural substitute for ephedrine.

Synephrine - has a similar structure to ephedrine. It is obtained naturally from unripe citrus fruits, e.g. Citrus uranium L., Citrus aurantium L. This substance is a natural substitute for ephedrine. It is more and more often added to medicines and dietary supplements intended for athletes as well as overweight people. This compound boosts metabolism, reduces appetite and at the same time increases mental and motor activity. Synephrine increases blood pressure and affects cardiac output. It widens the bronchi making it easier to breathe, effectively clears the sinuses and improves mood.

Theobromine - theobromine contained in cocoa beans already taken in small doses causes the expansion of blood vessels in the brain, and consequently improves the blood supply and nutrition of this organ and improves its functioning. It also has a similar effect on coronary vessels. Has a stimulating effect on the nervous system. Theobromine, especially in combination with some polyphenols and caffeine, increases the energy expenditure of the body and supports the process of fat reduction.

Naringen - naringin belongs to the group of flavonoids, is naturally obtained from grapefruit and is responsible for its bitter sma. The compound has strong antioxidant and anti-inflammatory properties, which prove to be helpful in preventing and combating obesity, hyperlipidemia, hypertension, atherosclerosis and diabetes. Naringin effectively suppresses your appetite, thanks to which you will get rid of unwanted kilograms even faster.

Yohimbine HCL - yohimbine hydrochloride is considered the strongest form of yohimbine because we know the exact concentration of the substance used. Studies have shown that it is effective in treating male impotence. By blocking alpha-2-adrenergic receptors, it allows you to lose excess fat usually accumulating in women on the hips, thighs and buttocks, and in men on the stomach and lower back. 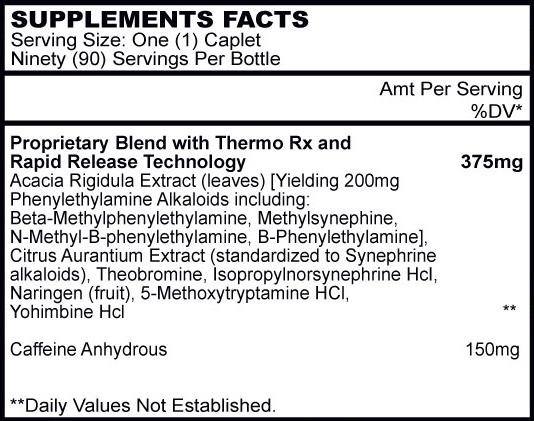