UNS For sleep Sleepvit is one of the most comprehensive regenerating stacks, aimed mainly at improving the quality of sleep.

The preparation has a positive effect on the functioning of the endocrine and nervous system by improving the body's ability to adapt to stressors (work, study, intense physical activity, as well as emotional stress). Sleepvit supports a good mood and reduces the level of cortisol in the body. Selected active ingredients allow you to fall asleep instantly and wake up in full strength. It also accelerates falling asleep during the simultaneous use of pre-workout supplements rich in stimulants.

Discover the ingredients of Sleepvit:

Hops extract - hops extract. It has a calming and hypnotic effect, and also has a positive effect on the body's regeneration process. In addition, it has antibacterial and anti-inflammatory properties, thus improving the appearance of the skin.

Valerian root extract - valerian, otherwise known as valerian root, is one of the most popular ways to deal with stress and high nervous tension. It allows you to quickly calm down, reduces anxiety and high nervousness. Additionally, it helps you fall asleep and sleep well throughout the night. Valerian owes its action to numerous active ingredients, such as valeranone, valerenal, esters of isovaleriaic acid or flavonoids. Some of these ingredients allow you to activate GABA receptors, thanks to which the brain quickly cuts itself off from unnecessary and stressful stimuli, providing instant tranquility.

Lavender flower extract - lavender extract. The medicinal plant has been known since ancient times and has been used for centuries to treat stress, anxiety, sleep disorders and depression. According to scientific research, it reduces the release of stress and anxiety-related hormones such as cortisol, and its effects are noticeable even after one use.

Ashwaghandha - Indian ginseng root extract popularly known as ashwaghanda, which is increasingly used due to its adaptogenic properties, i.e. increasing the body's resistance to stress factors. Also used in traditional medicine as a remedy for rheumatism, exhaustion, sexual impotence and even memory impairment. It contains many active substances, incl. Vitanolides, which are pharmacologically active compounds - have sedative, anti-cancer, cytotoxic and blood pressure lowering properties.

Gamma Aminobutyric Acid - occurs as an organic chemical compound from the group of amino acids that acts as the main neurotransmitter with an inhibitory effect throughout the nervous system. It affects not only building muscles, but also helps to fall asleep, relieves anxiety symptoms, relaxes and calms down. GABA affects the nervous system, increasing the excitability threshold of nerve cells and thus reducing their sensitivity to stimuli. GABA causes relaxation, calming, and - due to the increased release of endorphins - a general improvement in well-being and a better mood.

Melatonin - an organic chemical compound - a tryptophan derivative that acts as a 'sleep hormone' in the human body. It is produced in the pineal gland, more specifically in special cells called pinealocytes. Melatonin is somewhat related to another important neurohormone, serotonin. In a few chemical reactions, serotonin turns into melatonin when needed (and under the right conditions). Melatonin can also be used in shift work - when you have to go to bed at unusual hours, or when 'hours are shifted' in the case of the Jet Lag phenomenon. Melatonin is a powerful antioxidant - it reduces oxidative stress and thus prevents cell death. It is extremely important for the Central Nervous System, where it is present in the greatest amounts - it prevents damage to neurons and stops neurodegenerative diseases. The use of melatonin has no side effects.

Magnesium - is essential as a cofactor in hundreds of enzymatic processes in cells. It helps maintain normal muscle and nerve function, maintains a steady heart rate, supports the healthy functioning of the circulatory system, supports the immune system and keeps bones in good condition. Magnesium also helps maintain blood sugar levels and blood pressure, and is involved in energy metabolism and protein synthesis. Magnesium is the main factor in relaxing smooth muscles in blood vessels, thereby reducing peripheral vascular resistance and promoting a healthy cardiovascular system.

Vitamin B6 - vitamin B 6 is a coenzyme of many enzymatic changes in the body, including transamination and decarboxylation of amino acids. Its participation in the transformation of tryptophan, which produces serotonin and nicotinic acid, is particularly important. It is essential in the process of phosphorylation, influences glycogenesis and glycogenolysis in muscles, and plays an important role in immune and hematopoietic processes.

3 capsules a day one hour before bedtime. 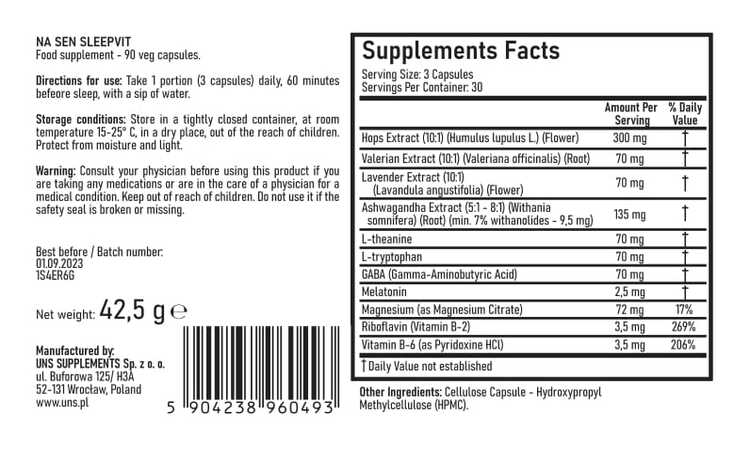