Effective Nootropic Mane Brain, boost your energy and focus during the day!

Magnum Nutraceuticals Mane Brain is a new supplement with a strong nootropic effect that increases focus and improves cognitive functions. The unique blend has been developed to enhance energy, endurance and improve mood. A clinically formulated nootropic is designed to increase the brain's ability to remember more information, and to reduce stress and anxiety.

One of the key ingredients in Mane Brain is organic lion's mane extract that supports the production of nerve growth factor (NGF). NGF is a neuropeptide that helps process and transfer information between neurons. The supplement is extremely helpful while focusing on an exam or exercising at the gym. An exceptionally effective product, it is a perfect component for your favorite pre-workout, and also as a support for mental effort at school, work or during training sessions.

Who is Mane Brain recommended for?

Athletes who want to enhance their training effects

Anyone who needs increased concentration, memory improvement and stress reduction.

Meet the composition of Mane Brain:

Organic Lion's Mane - organic lion's mane. It has been used as a natural nootropic for centuries. Especially widespread in China, where it was used to increase cognitive functions, improve mood and alleviate symptoms of memory loss. The natural ingredient increases the production of the nerve growth factor. The peptide promotes the growth of brain tissues, including dendrites.

Alpha-GPC - a water-soluble choline derivative that transforms into acetylcholine in the body, one of the most important neurotransmitters. Scientific research has shown that supplementation with Alpha GPC really increases the level of acetylcholine in the brain, which translates into significantly better memory and concentration, also in young people. Other clinical studies have shown that L-alpha-glycerylpforsorylcholine supplementation supports brain function also in people suffering from Alzheimer's disease and dementia, while delaying the aging process. Alpha-GPC activates the parasympathetic (relaxing, sedative) system, increases the level of GABA (inhibitory neurotransmitter) and growth hormone (GH, regenerating hormone), reduces adrenergic (sympathetic) activity, thus reducing the effects of stress and irritation. It has a calming, anti-stress and relaxing effect. Supports the regeneration of the nervous system. Therefore, it is best to take this remedy before going to bed or resting.

Bacopa Monnieri - a well-known and highly valued herb of Ayurvedic medicine, an ingredient of Mane Brain. Recommended in states of increased cognitive effort, to improve memory and concentration, in states of depression, decreased libido and for the elderly showing symptoms of dementia and confusion. Due to its adaptogenic properties, stimulating the formation of new proteins and anti-inflammatory, it works great after strokes and brain injuries. It has strong antioxidant properties, effectively removes free radicals, thus inhibits neoplastic processes and supports the regeneration and renewal of tissues.

Huperzine Serrata - one of the most amazing alkaloids used to increase the ability to remember. Hupercine A is one of the most desirable substances from the group of agents providing the so-called brain cheering. It allows us to achieve maximum concentration, focus and isolate our attention in almost every situation. It is perfect for people with very demanding mental work as well as students or high school graduates. Unlike many other stimulants that affect our mind, its effect does not weaken with time and we can benefit from hupercine supplementation for a very long time. 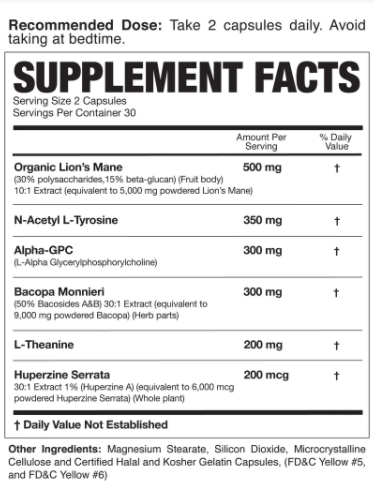