Genius Nutrition Lipo-GN is a new powerful fat burner with thermogenic action. It contains a set of the most effective ingredients with scientifically proven effects, ensuring a slim figure. It is rich in ingredients such as: advanced forms of carnitine ALCAR and GPLC, green tea extract, caffeine, Ubiquinol, and ingredients with adaptogenic effects. High doses of active ingredients increase metabolism, increase the level of energy and focus, and above all, intensify the thermogenesis process, allowing you to burn more fat cells.

Genius Nutrition® uses a combination of the most advanced and effective forms of L-carnitine in its formula, which support the body in burning fat during exercise. The unique combination of ingredients with the addition of minerals and plant adaptogens affects the functions of the brain, improves concentration, which significantly increases endurance.

Magnesium Citrate - magnesium citrate is the best digestible source of magnesium due to the greatest similarity to compounds contained in food. Organic magnesium compounds are superior to inorganic ones in terms of the level of solubility, which for magnesium citrate is much greater compared to its inorganic counterparts. This factor significantly increases the bioavailability of magnesium from such a source and it can be up to 90%. The supplement helps maintain electrolyte balance, healthy teeth and bones. It contributes to the maintenance of proper energy metabolism. It supports the proper functioning of muscles, the functioning of the nervous system and the maintenance of proper psychological functions. In addition, it supports protein synthesis and plays an important role in the process of cell division.

Vitamin B2 - has important functions in the body, it is necessary for the proper functioning of the central and peripheral nervous system as well as the immune system. Together with vitamin A, it is responsible for the proper, good condition of the mucous membranes, including the mucosa of the digestive tract, skin and blood vessels. Some research studies indicate that it is involved in the formation of red blood cells and blood.

Chromium Citrate - chromium citrate. Chromium is an essential micronutrient that influences insulin secretion, thus increasing the level of glucose in muscles and blood. It improves the transport of amino acids to cells, stimulates energy transformations. For people who are slimming and using physical exercise, an important property of chromium is its positive effect on reducing the need to reach for something sweet.

GPLC - a combination of L-carnitine ester and glycine. This combination supports the bioavailability of the molecule. GPLC supports the production of nitric oxide, which perfectly supports the body during training. The compound effectively supports fat reduction and contributes to the construction of lean muscle mass, increases strength and endurance.

ALC - is L-carnitine acetyl ester. It is produced in the cells of the human body, and more specifically in the mitochondria, by the enzyme carnitine acetyltransferase (CAT). It takes part in many metabolic cycles, e.g. in β-oxidation of fatty acids and energy production. It can also donate an acetyl group in the production of acetyl-coenzyme α (acetyl-CoA). It may also act as a molecular chaperone that enables the proper formation of newly synthesized protein chains and influences their functions. Compared to the "regular" L-carnitine, its acetyl derivative has a much stronger effect on the central nervous system. Supplements with acetyl-L-carnitine are intended in particular for people planning to reduce body fat, elderly people who are prone to memory disorders, and all physically and mentally active, under the influence of stress and adverse environmental factors. Acetyl L-carnitine reduces the feeling of fatigue and its perception, supports the processes of reducing body fat.

Rhodiola Rosea - plant belonging to the group of adaptogens, plants that help the body adapt to high mental and physical stress. It is also known as arctic root or golden root. It contains over 140 active ingredients, the two most important of which are rosavin and salidroside. Rosavins and salidroside increase the level of serotonin and dopamine in the brain. Additionally, they lower the level of adrenal hormones such as glucocorticosteroids and cortisol. These hormones are produced by the glands under stress. Both ingredients stimulate the synthesis of endorphins called the happiness hormone. Rosavins perfectly improve mood, increase concentration, improve memory and promote cognitive functions. The main action of Rhodiola is to relieve fatigue, improve concentration and improve mood. All this translates into better results both at the gym, as well as at work or school.

L-Theanine - is a non-protein amino acid found naturally in green tea leaves - camellia. It has psychoactive properties because it easily crosses the blood-brain barrier. It stabilizes the mood, calms down, relieves symptoms of stress and anxiety. Also used as a nootropic agent - improving cognitive functions, work efficiency and learning efficiency. Researchers have proven the effectiveness of Theanine in increasing concentration, alertness and productivity, and the effects are already visible within the first hour after administration.

Yerba Mate - theobromine is a compound known from the popular yerba mate, which shows diuretic properties, which helps to get rid of excess water from the body, masking the effects of reducing body fat. In this way, it directly affects the aesthetics of the figure by maximizing the muscle definition. In combination with caffeine, theobromine also has a thermogenic effect, accelerating the reduction of body fat.

Ubiquinone - a reduced form of coenzyme Q10. It has a high bioavailability compared to the regular Q10. It is one of the best antioxidants. It delays the aging process of the body and supports the work of the entire cardiovascular system.

Take 1-2 capsules with plenty of water. 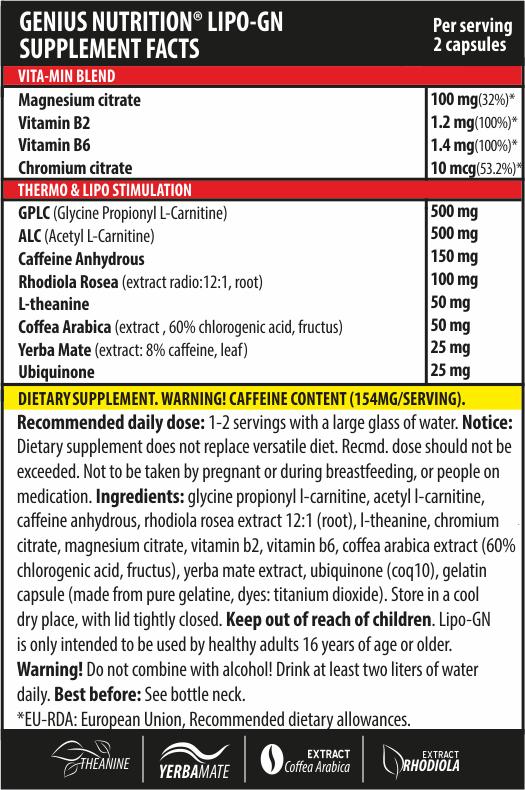