Lean EFX is a unique, powerful fat burner made of a blend of natural and synthetic ingredients.

The formula consists of 3 blends: NEXT gene EFX, Thermo EFX and Neuro Therapy EFX. The supplement helps in losing unnecessary kilograms and obtaining a slim, sculpted athletic figure. The product promotes increased energy, improved mood. New generation ingredients allow you to quickly lose unnecessary fat, and with additional training and a proper diet you will get your dream figure in a short time.

Effectively increasing metabolism, it works for a long time after use, and even when you are not training!

Benefits of using the supplement:

- increased energy and focus during training

Caffeine 1,3,7-trimethylxanthine - has a thermogenic effect and suppresses appetite, thanks to increased production of adrenaline and noradrenaline. It has been proven to increase the formation of such neurotransmitters in the central nervous system as dopamine, acetylcholine or even serotonin, which exerts a stimulating effect and increases cognitive function. The overall effect of caffeine on the body allows you to maintain the effectiveness of training and maintain a positive mood, despite the calorie deficit.

Cassia Nomame is a plant derived from China, a natural lipase inhibitor. It effectively blocks the enzyme responsible for transporting fat into the bloodstream. It shows diuretic properties by inhibiting the accumulation of water in the body. Has stimulating and anti-inflammatory effects. Stimulates metabolism causing a thermogenic effect. Lowers triglycerides and bad cholesterol.

Taraxacum Extract - probably comes from Europe, but has long spread to America, Asia and South America. In Chinese medicine it was described for the first time around 659 and in European medicine in 1485. In Arabic medicine, it became an official specificity in the 16th century. Naturally rich in concentrated vitamins, minerals and essential fatty acids, it has been used for generations to improve digestion and regulate digestive tract function, and to support proper circulation. Is a very strong diuretic (dehydrating substance). This is the most powerful herb that helps get rid of subcutaneous water. In addition, it is attributed to detoxifying and cleansing properties, accelerates metabolism. Its root contains a lot of mineral salts, especially potassium, organic acids, sterols, inulin, and choline. The product supports the metabolism.

Green Tea Extract - owes its slimming properties to catechins, namely a substance called epigallocatechin gallate (EGCG). Catechins contained in green tea extract have a significant impact on fat reduction. They inhibit the absorption of fats from food and increase their consumption by the body. In addition, green tea increases the activity of some enzymes responsible for the digestive process, has a positive effect on liver metabolism, increases thermogenesis and accelerates fat oxidation.

Bearberry- is a fruit belonging to the genus Arctostaphylos uva-ursi. The word uva-ursi means "bear grape" because bears like this fruit very much. It is a low-growing shrub that can be found in Asia, Europe and Central and North America. The plant has detoxifying, analgesic and immunological protection properties. Effectively treats inflammation.

Niacin - Niacin supplementation also has benefits for the immune system. Studies show that the systematic use of vitamin B3 leads to an increase in neutrophil count. They are white blood cells that allow the destruction of pathogenic microorganisms in the form of bacteria. Vitamin PP also leads to an improvement in the functionality of the central nervous system. The increase in activity in the mitochondrial nuclei, which are located in the nucleus accumbens, contributes to the improvement of the human mental condition, which is manifested by: increased confidence, reduced effects of felt stress and reduced anxiety.

DMHA - a strong stimulant similar to DMAA. It affects the central nervous system by increasing the level of dopamine and noradrenaline. It is the perfect complement to hard training that allows you to make huge progress in the gym, increasing the pain threshold for best results. Intensive workouts combined with the use of DMHA give phenomenal results in the form of appetite suppression, reduction of body fat, increase of memory and creativity as well as reduction of anxiety and anti-fatigue. The ingredient is an interesting alternative for people who rave about DMAA, but show poor tolerance to this stimulant.

Thiamine - vitamin B1 is very well soluble in water which directly affects its absorption. Plays an important role in tissue respiration, including carbohydrate metabolism. This is one of the most important vitamins, whose deficiencies can lead to weakness, fatigue, eye problems (nystagmus), circulatory failure, digestive system disorders, and even in extreme cases to depression.

Phyllanthus emblica- is commonly known as Indian gooseberry or aml. Is an important herbal medicine used in unani (Graceo - arab) and Ayurvedic medicine. The plant is used both as a medicine and tonic to build lost vitality and vigor. Phyllanthus emblica is highly nutritious and is an excellent source of vitamin C, amino acids and minerals. The plant also contains phenolic compounds, tannins, routine, curcumin and emblicol. The plant has anti-diabetic, hypolipidemic, anti-bacterial, anti-oxidant, anti-ulcer, hepatoprotective, gastroprotective and chemopreventive properties.

Bitter Orange - bitter orange is not an edible fruit but it is an excellent source of vitamin C, which amount in the extract can reach up to 42%. Bitter oranges are much richer not only in vitamin C but also in antioxidants, e.g. bioflavonoids such as hesperidin, compared to regular oranges. In addition to the high content of highly absorbable vitamin C, bitter orange is primarily known for its content in the synephrine plant, which is a natural substitute for ephedrine. Synephrine has a similar structure to ephedrine. It is obtained naturally from unripe citrus fruits, e.g. Citrus uranium L., Citrus aurantium L. This substance is a natural substitute for ephedrine. It is more and more often added to medicines and dietary supplements intended for athletes as well as overweight people. This compound boosts metabolism, reduces appetite and at the same time increases mental and motor activity. Synephrine increases blood pressure and affects cardiac output. It widens the bronchi making it easier to breathe, effectively clears the sinuses and improves mood.

5 HTP- is a naturally occurring substance that is obtained from the seeds of the West African plant Griffonia simplicifolia. Man has the ability to automatically produce it from L-tryptophan - an amino acid found in products containing proteins, although consuming this amino acid does not ensure a steady increase in 5-HTP in the body. In practice, 5-hydroxytryptophan acts as a precursor to serotonin (5 HT), which by converting - ensures an increase in the level of this very important hormone - a neurotransmitter, which plays a huge role in many human life functions. 5-HTP taken orally, quickly enters the bloodstream, and its absorption is over 70%. In a short time, it overcomes the blood-brain barrier and begins its operation. It is worth mentioning that the range of its applications is huge. 5-HTP as a dietary supplement helps during a strict diet, when the level of serotonin decreases significantly, which in turn manifests as a craving for carbohydrates. 5-HTP effectively acts as a so-called "blocker" of appetite and significantly helps to cope with hunger-giving hunger during an acute diet. When serotonin levels are too low, sudden surges of aggression, fatigue and depression may appear. Because the 5-HTP amino acid improves the mood and increases the energy level, using the 5-HTP supplement is much easier to persevere in ongoing slimming treatment.

N-Acethyl-Tyrosine- is an acetylated derivative of the amino acid L-tyrosine. Plain L-tyrosine is less stable and also less soluble in water, which can lead to reduced bioavailability. Acetylation increases the solubility and stability of some amino acids. N-acetyl-L-tyrosine supports brain function by supporting the synthesis of norepinephrine and dopamine (neurotransmitters) catecholamines.

Panax Ginseng- glycosidic saponins are composed of two parts. The first of these (glicon) is a saccharide, or sugar. The other (aglikon) has a structure resembling the structure of hormones. Accordingly, ginsenosides are classified as steroid saponins, i.e. they cause the synthesis of steroid hormones. They are responsible for increasing the level of libido in both women and men. 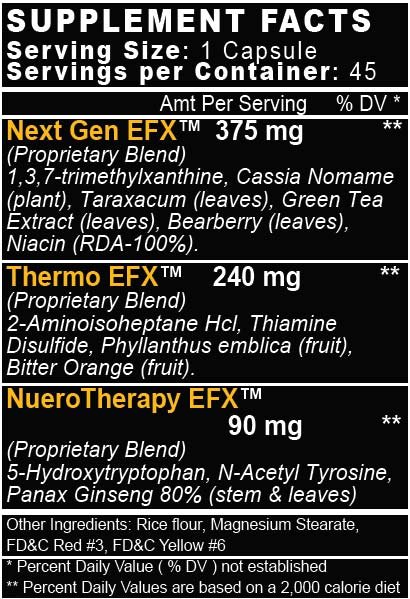