Eca Elite is a strong fat burner with intense activity that drastically reduces fat burning and increases energy and motivation to operate. Properly selected and selected ingredients affect the loss of unwanted kilos by suppressing appetite. The product significantly accelerates the metabolism and is an ideal pre-workout support supplement. The burner is in the US one of the strongest products promoting the loss of unnecessary fat and high-quality ingredients ensure fast loss of unnecessary kilograms.

Yohimbe Bark Extract - a substance that is helpful in the fight against the so-called resistant fat tissue, located mainly in the thorax and lower waist areas of men and hips, buttocks and thighs in women. Yohimbine works by blocking the α2-type receptors, which clearly facilitates slimming and is helpful in sculpting body parts resistant to slimming. It is worth remembering that yohimbine effectively eliminates insulin. So taking this compound around carbohydrate meals is pointless. Yohimbine is particularly effective when used on an empty stomach, before physical exertion.

Synephrine - has a similar structure to ephedrine. It is obtained in a natural way, from immature citrus fruit, e.g. Citrus uranium L., Citrus aurantium L. This substance is a natural substitute for ephedra. Increasingly, it is added to drugs and dietary supplements intended for athletes as well as overweight people. This compound boosts metabolism, reduces appetite and at the same time increases mental and motor activity. Synephrine increases blood pressure and affects the minute volume of the heart. It widens the bronchi to facilitate breathing, effectively clears the sinuses and improves well-being.

Ephedra Extract - the plant contains alkaloids with a thermogenic effect, which increases the basic energy expenditure of the body causing a caloric deficit. It is thus an effective way to increase the rate of metabolism and fat burning. In addition, supplementation with green grass extracts reduces appetite, makes it easier to maintain the diet, especially during periods of low caloric intake. In addition, studies show that the plant is a source of flavonoids able to scavenge free radicals in the body.

White Willow bark -is a rich source of salicylin - a substance with strong analgesic, antipyretic and anti-inflammatory effects, sometimes called natural aspirin. It helps to reduce the feeling of tiredness, pain after training, neutralization of inflammation, cleanses the body of toxins and shows a diaphoretic effect.

Nettle Root - research conducted in recent years proves that the plant and substances contained in it show strong antioxidant, antiaggregation, anti-inflammatory, hypocholesterolemic and hypoglycaemic effects. These properties make the nettle more and more popular and is constantly looking for new prophylactic and therapeutic applications in the field of its possible use in many diseases and ailments.

Caffeine Anhydrous - has a thermogenic effect and suppresses appetite due to the increase in the production of adrenaline and noradrenaline. It has been proven that it causes the formation of such neurotransmitters as dopamine, acetylcholine or even serotonin in the central nervous system, which exerts a stimulating effect and increases cognitive functions. The overall activity of caffeine on the body, allows you to maintain the effectiveness of training and maintain a positive mood, despite the calorie deficit.

Phenylethylamine HCL- is a component with a broad spectrum of activity. The main ones include: increasing cognitive skills, improving mood, losing weight and improving concentration. The neuromodulator's operation is attributed to it. It is an organic chemical compound of amines, a natural monoamine neurotransmitter. In the brain, it causes the release of norepinephrine and dopamine - two very strong neurotransmitters responsible for vigilance and attention.

Picamilon - is a tested compound with nootropic properties. The active ingredient of pikamilon consists of active substances the first of which is GABA and the second is niacin. Pikamilon crosses the blood-brain barrier. It is used mainly to reduce anxiety and also to increase the efficiency of the body. Picamilon has nootropic properties. Studies have shown that the relationship is extremely effective in improving the speed of learning and strengthens memory.

Chromium - is an essential micronutrient that influences the secretion of insulin, thus affecting the increase in the level of glucose in the muscles and blood. It improves the transport of amino acids to cells, stimulates energy metabolism. For people who are slimming and using physical exercise, an important property of chromium is its positive effect on limiting the need to reach for something sweet. Chromium supplementation allows to supplement its deficiencies in the diet, and also thanks to its very high bioavailability allows you to fight overweight more effectively.

Vitamin B3- also leads to improved functionality of the central nervous system. The increase in activity in the mitochondrial nuclei, which are found in the nucleus accumbens, contributes to the improvement of the mental condition of a human being, which is manifested in: increased self-confidence, reduced effects of perceived stress and reduced anxiety. In addition, niacin affects the proper cholesterol concentration in the blood, participates in the synthesis of red blood cells and improves the condition of the skin, hair and nails

Vitamin B9 - in other words, folic acid is a member of the family of the B complex of vitamins. In large amounts it occurs in deciduous, green vegetables. It takes part in many important enzymatic reactions in the body and helps to convert vitamin B12 into one of the active forms. Maintaining the optimal level of this essential vitamin is essential for proper cell growth and protein synthesis.

1 capsule 1-2 times a day, in the morning and / or half an hour before training. 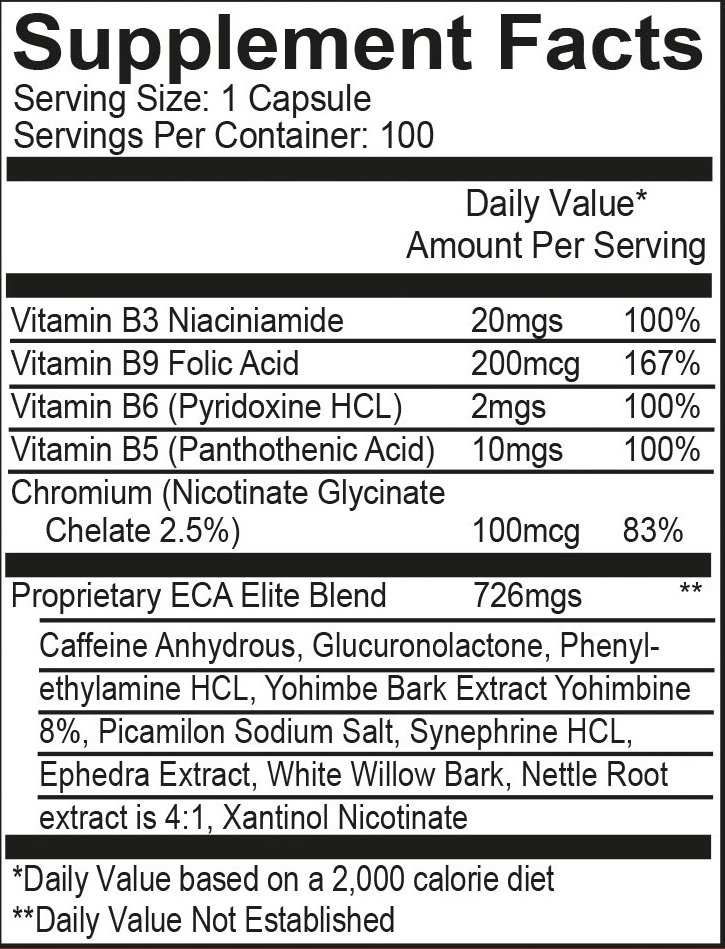