Condemned Labz DNA Dispatch is a product designed to optimize the flow of blood and nutrients in the body. It contains compounds that dilate blood vessels, and thus allow faster nutrition and stronger blood supply to those in need. DNA Dispatch is currently the most advanced nitrogen oxide booster on the supplementation market.


Nitric oxide promotes blood flow in the body's tissues, allowing more oxygen to be delivered to the muscles. When the body is adequately oxygenated, it can withstand longer and heavier workouts, the number of repetitions directly translates into better strength and figure results. Knowing the importance of oxygen, Dna Dispatch strategically uses the components directly responsible for oxygenating the body and strengthening the immune system.

The product is distinguished by an extensive composition in which we find substances appreciated by athletes due to their effectiveness, confirmed by both their practical experience and scientific research. They were selected in portions that ensure intensive action even in experienced people, resistant to many other pre-workout boosters. This guarantees the maximum training support, allowing you to get through the hardest workouts on the way to the desired goal.

The Dispatch Bottom includes, among others:

PeakO2 - is a certified combination of six strains of ayurvedic mushrooms grown and harvested in the USA. These mushrooms are powerful adaptogens that allow athletes to "adapt" to physical and mental stress and overcome it, giving you the extra edge you want to take. Your training to the next level. Increased strength and endurance in just seven days! Peak0₂ fungal strains are grown on organic oats - a unique process that maintains peak biological activity for maximum efficiency. Pik0₂ contains high levels of beta glucans and L-ergotionein, the "main" antioxidant that combats damage caused by oxidative stress in the body, helping athletes train longer, recover faster and feel better at every stage. PeakO2 can increase endurance, like no other supplement. In a 21-day clinical trial at the University of North Carolina, Chapel Hill, PeakO2 users improved their time to muscle exhaustion by 70 seconds compared to their initial value.

Agmatine Sulfate - increases blood flow supporting the process of "cleansing" of working muscles. In every cell there is a specific exchange of oxygen and nutrients for carbon dioxide and harmful metabolic products that the body needs to remove, and due to the increased blood flow, such exchanges take place faster so that the cells of muscle tissue can work longer and harder. Arterial blood contains essential muscle oxygen and provides nutrients such as amino acids, sugars, creatine, arginine from the outside. Thanks to the action of nitric oxide, the transport of the body is more efficient, thanks to which not only the cells receive nutrients but also the harmful metabolic products are removed more quickly.

Citrulline Malate 2: 1 - Participates in the synthesis of nitric oxide (NO) and phosphocreatine and aerobic glucose metabolism, thereby increasing the uptake of oxygen, glucose, amino acids and creatine and energy production through muscle cells. It reduces the concentration of lactic acid and ammonia in the muscles, allowing the body to recover energy faster by increasing the level of creatine phosphate and resynthesis ATP. Citrulline malate is a much more effective form than high doses of arginine, as it is its precursor. At the same dose as arginine is more effective in increasing its amount in the body than arginine alone.

GPLC - It causes increased vasodilation, gives a feeling of efficiency, removes lactic acid - sores disappear. It also helps to burn fat and adds energy during training. It also has the power of antioxidants, because it is active in the body for a long time. GPLC has the ability to expand blood vessels, allowing even better blood supply to muscles and soft tissues. Thanks to such a large inflow of blood to the muscles, the pump is strongly felt and long-lasting. GlycoCarn - a combination of glycine and L-carnitine. Participates in the process of formation of red blood cells, thus affects the transport of oxygen in the blood, plays an important role in the synthesis of Glucose and Creatine.

Beet Root Powder - due to the high content of betalain and by stimulation Nrf2 activating the synthesis of endogenous antioxidant enzymes, shows a strong antioxidant effect, protecting the body's structure against free radicals, reactive oxygen species, excessive iron aggression. As a rich source of nitrates, transformed with the oral microflora to nitrite, which is then absorbed in

L-Norvaline - increases the availability of arginine for endothelial NO synthase (eNOS). Thus, it promotes its conversion to citrulline and nitric oxide (NO). It affects: improvement of blood circulation in the blood system, inhibition of platelet aggregation, inhibition of leukocyte adhesion to the endothelium, oxygenation of cells and their detoxification.

Grape Seed Extract - is a beneficial substance supporting our body. It contains polyphenolic compounds that have antioxidant properties and protect cells from the harmful effects of free radicals. It also influences the improvement of the cardiovascular system and supports the circulatory system.

Coenzyme Q10 - has an antioxidant effect - helps prevent cell damage caused by free radicals, which may result from intense stress or metabolic processes. It strengthens the functioning of the heart and immune system. In reaction with oxygen, Coenzyme Q10 obtains energy from nutrients at the cellular level (in the form of ATP). Thus, coenzyme Q10 gives more energy and also helps increase the body's efficiency.

Vanadyl Sulfate - it imitates the action of insulin, it improves the absorption of carbohydrates. In addition, it sensitizes insulin receptors in muscle cells, improves the utilization of glucose for filling muscle glycogen stores and also stimulates the deposition of amino acids into muscle cells. 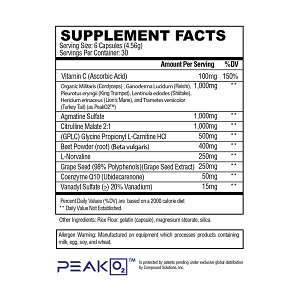