Yellow Bullet Xtreme is one of the most effective products with Ephedra extract. It contains only proven ingredients that, acting synergistically, increase the level of thermogenesis in the body, thus contributing to the loss of body fat. The supplement effectively boosts metabolism, suppresses appetite and increases energy levels. Yellow Bullet Xtreme is the best burner ever made, and there is no hint of exaggeration in this sentence. It is aimed at people who are simply looking for the best product on the market.

Certainly the benefit of its use is the rapid rate of fat burning, providing a powerful dose of energy and motivation for the day. The product reduces the appetite for sweet snacks and effectively improves well-being. Yellow Bullet works extremely effectively in losing weight and helps to regain energy, motivates the body to increase metabolism, thanks to which you burn more calories. It was created for quick destruction of fat cells and extreme support of slimming. It owes its exceptional action to the strongest known ingredient that burns adipose tissue. It also contains a number of ingredients with a thermogenic and energetic effect.

Ephedra-plant contains alkaloids with thermogenic effect, which increases the basic energy expenditure of the body causing a caloric deficit. It is thus an effective way to increase the rate of metabolism and fat burning. In addition, supplementation with green grass extracts reduces appetite, makes it easier to maintain the diet, especially during periods of low caloric intake. In addition, studies show that the plant is a source of flavonoids able to scavenge free radicals in the body.

PEA- is a component with a broad spectrum of activity. The main ones include: increasing cognitive skills, improving mood, losing weight and improving concentration. The neuromodulator's operation is attributed to it. It is an organic chemical compound of amines, a natural monoamine neurotransmitter. In the brain, it causes the release of norepinephrine and dopamine - two very strong neurotransmitters responsible for vigilance and attention.

Yohimbine - is a long-proven ingredient for weight loss. Clinical studies have shown that yohimbine can support a better frame of mind and general mood. In its form, Yohimbe has been used for centuries as a performance ingredient and an advanced stimulant. The recently more powerful, purified and standardized form of Yohimbine - Yohimbine - has been used to support people who want to lose weight and feel good about it. It is classified as an "alpha-2 adreno receptor antagonist". Alpha-2 receptors are found mainly in fat cells of the body. When alpha-2 receptors are activated, the mobilization of free fatty acid is inhibited. Yohimbine works by blocking the activation of alpha-2 receptors in fat cells, helping to release accumulated fat in the form of fatty acids to produce energy.

Caffeine- is characterized by a rapid action that stimulates the body to intensify both physical and mental effort. It is a component of food regularly consumed by the majority of the population. Caffeine works by stimulating the central nervous system, which is why it is considered the most consumed stimulant.

Chromium -is an essential micronutrient that influences the secretion of insulin, thus affecting the increase in the level of glucose in muscles and blood. It improves the transport of amino acids to cells, stimulates energy metabolism. For people who are slimming and using physical exercise, an important property of chromium is its positive effect on limiting the need to reach for something sweet. Chromium supplementation allows to supplement its deficiencies in the diet, and also thanks to its very high absorbability allows you to fight overweight more effectively. 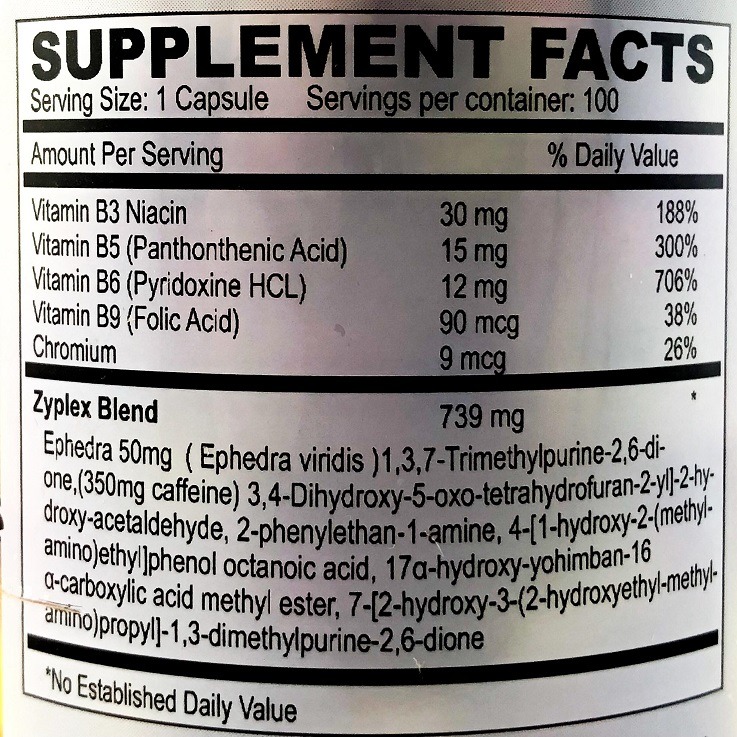