We present you with a new version of the unique fat burner straight from the US from Prime Nutrition. Redux is a high quality product that contains in its composition only the most effective ingredients in high concentration. Jump to the next level and start slimming with one of the best and strongest smokers on the diet supplement market. An aggressive mix of top stimulants, mood enhancers and strengthened anabolics guarantees fast weight loss.

Prime nutrition redux is recommended for both women and men who want to maximize fat reduction while maintaining lean muscle mass. You will see amazing effects of supplementation in a short period of time, and in combination with training you will gain your dream figure.

Summing up, Redux intensifies energy expenses of the body by stimulating heat production, reduces appetite and regulates the absorption of substances from food, protecting the body from accumulating fat tissue. The best thing is that the Redux burner works even when we do not do physical exercise.

Caffeine Anhydrous - is an anhydrous form of caffeine from the group of organic compounds. It blocks the adenosine receptors in the brain, which results in eliminating the feeling of tiredness during training. Due to its thermogenic action, it effectively burns fat and improves metabolism.

2-aminoisoheptane HCL- is a stimulant that has other names like DMHA or octodrine. DMHA has a relaxant effect on the bronchi, thanks to which our aerobic capacity increases, furthermore it has a decongestant activity (narrowing blood vessels, causing an increase in the oxygen flow rate), does not cause "stupor" and sharpens the senses that could not always be experienced with dmaa.

Senegalia Berlanderi- plant is the source of many alkaloids, including: N-methylphenylamine, tyramine and phenylethylamine. Berlandieri's Senegalia affects energy growth, increased motivation to act and improve well-being. The effect of its action is to increase the level of dopamine, serotonin and adrenaline in the body. Extract from the raw material Senegalia Berlandieri also increases lipolysis and boosts the metabolism

Eria Jarensis Extract - acts as a neuromodulator on the central nervous system, giving many benefits to cognitive functions. Provides effects that improve mood by increasing the level of dopamine and nor-adrenaline in the body. Dopamine is responsible for increasing the sense of well-being, and therefore the extract from Eria Jarensis provides a euphoric effect, and at the same time reduces the feeling of anxiety. Dopamine and noradrenaline are also associated with increased mental alertness and concentration.

Bitter Orange Extract - bitter orange is not an edible fruit but it is an excellent source of vitamin C, the amount of which in the extract can reach even 42%. Bitter oranges are much richer than just vitamin C, but also antioxidants such as bioflavonoids, such as hesperidin. In addition to the high content of perfectly digestible vitamin C, the bitter orange is primarily known for its consistency in the synephrine plant, which is a natural substitute for ephedrine. Synephrine has a similar structure to ephedrine. It is obtained in a natural way, from immature citrus fruits, e.g. Citrus uranium L., Citrus aurantium L. This substance is a natural substitute for ephedra. Increasingly, it is added to drugs and dietary supplements intended for athletes as well as overweight people. This compound boosts metabolism, reduces appetite and at the same time increases mental and motor activity.

Higenamine HCL-higenamine affects the production of nitric acid. Nitric acid affects the release of hormones and adrenaline. It is also certain that the product accelerates the regeneration time of the body, and also increases the amount of blood flowing, and thus the amount of nutrients supplied to the muscles is much greater.

Naringen-regulates metabolic processes, increasing the sensitivity of cells to insulin. It has strong detoxifying properties and also contributes to the reduction of harmful lipid fractions.

6,7-Dihydroxybergamottin (Bergamotin) - is a natural compound belonging to furanocoumarins, is present, inter alia, in grapefruit, in bergamot oil and essential oils contained in citrus. It works by inhibiting the activity of cytochrome P-450 involved in the metabolism of many substances. The 6,7-Dihydroxybergamottiin in the Prime Nutrition Redux supplement is an excellent supplement to increase the bioavailability and effectiveness of the other ingredients contained in the product.

Rauwolscine- root extract Rauwolfia vomitoria, plants from the Apocynaceae family, a shrub that naturally grows in tropical regions of Africa, brought to other continents, including Asian. It has antioxidant, anti-inflammatory and analgesic properties, supports carbohydrate and insulin metabolism, counteracts cancer and improves mental health. High standardization of the rauwolscine extract, in other words, yohimbine or isohimine, focuses the action of the product on the nervous system and the loss of unnecessary body mass. Inhibiting the operation of the cholinergic system, it increases the concentration of adrenaline, stimulating the body to function and intensifying the lipolysis process. By decreasing α2-adrenergic receptor activity, it increases adenylyl cyclase and cyclic adenosine-3 ', 5'-monophosphate (cAMP), enhancing the oxidation of fatty acids in the mitochondria. It promotes the burning of previously stored adipose tissue in areas of the body rich in α2-adrenergic receptors, mainly the lower abdomen and on the hips. 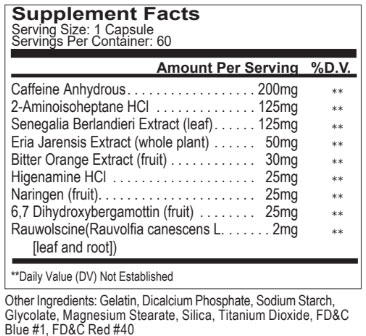