Red Wasp is a great product that allows you to lose unnecessary kilograms in the most stubborn places and a short period of time !

The addition of nootropic substances and stimulants makes the supplement work perfectly well as a pre-training agent, ensuring concentration and inflow of energy. The admixture of pro-health agents increases the body's resistance to stress, diseases, provides extremely important antioxidants and improves mood.

Red Wasp is a supplement developed for the rapid burning of body fat. The producer of this product is Cloma Pharma, recognized as a leader among companies producing fat burners. The main active ingredient is hygramin. The effect of this compound is similar to that of geranium, but it provides a much better effect. Many scientific sources indicate that hygraminamine may soon be one of the best slimming measures.

Yohimbine (Yohimbine HCl & Alpha-Yohimbine) combination of both forms of Yohimbine strengthens its action in effective lipolysis of fats and effective weight loss. The blend blocks α2-adrenergic receptors, which enables more efficient energy recovery with free fatty acids accumulated in the cell and accelerates the slimming effect.

Its special feature is getting rid of fat from the most resistant places, such as the stomach, thighs or buttocks. The addition of Alpha - Yohimbine causes a stronger inhibition of the neuro - breakdown of serotonin, noradrenaline and dopamine. In addition, it should be added that yohimbine enhances sensation and sexual performance and increases libido.

Anhydrous Caffeine is more potent than its usual form because it is more easily absorbed by the body. Provides better focus and concentration. Many years of research and use have proven that it is a powerful stimulant, acting mainly on the central nervous system.

Choline chloride is a precursor to the production of one of the major neurotransmitters - acetylcholine. It is classified as a nootropic substance that positively affects the functions of the central nervous system, and their main action is based on improving cognitive skills, focus, alertness and well-being.

Higenamine (Nelumbo nucifera seed extract) used before training improves concentration and adds energy. A lot of scientific evidence confirms the action of higenamine as a powerful fat burner. This substance is also a bronchodilator and causes the dilation of bronchi and bronchioles, reduction of resistance in the airways and increases the air flow to the lungs.

Ginger root extract is the source of biologically active compounds called gingerolami. These substances have antioxidant properties, have anti-inflammatory, warming, regulate the functioning of the gastrointestinal tract and exert a beneficial effect on the functions of the cardiovascular system.

Ephedra nevadensis is a growing plant in areas of western North America. Unlike other Ephedra species, it does not contain a strong stimulant like ephedrine. It is used in colds, impaired renal function, strengthens immunity and cleansing the body.

The extract of red tea leaves (Aspalathus linearis) is a wealth of antioxidants and vitamin C, thanks to which it has a positive effect on the immune system. The main effect of infusion from the leaves of this plant is: lowering blood pressure, slowing down the aging process and inhibiting the production of cancer cells. Due to the high content of phenolic acids, it has a beneficial effect on the digestive system.

Nicotinoyl GABA is a combination of nicotinic acid and gamma-aminobutyric acid. This agent increases the cerebral blood flow and acts as a neurotransmitter, and its supplementation provides a wide spectrum of benefits. It shows antidepressant effect, improves the quality of sleep, reduces anxiety and stress, improves concentration, memory and relieves headaches.

Phenylethylamine (PEA) is one of the most effective compounds with nootropic action. In the brain, it releases dopamine, norepinephrine, acetylcholine and helps in the secretion of β - endorphins, which are responsible for the pleasure. It increases energy levels, accelerates metabolism, improves focus and increases motivation.

Ginseng Red Chinese root extract used in medicine for thousands of years as a panacea and a recipe for longevity. Thanks to the content of many active compounds (triterpene saponins, panaxes and ginsenanams, sterols, polypeptides, amino acids, fatty acids and their glycerides and mineral compounds), it has a very wide range of applications.

One capsule 1-2 times a day, in the morning and / or half an hour before training. 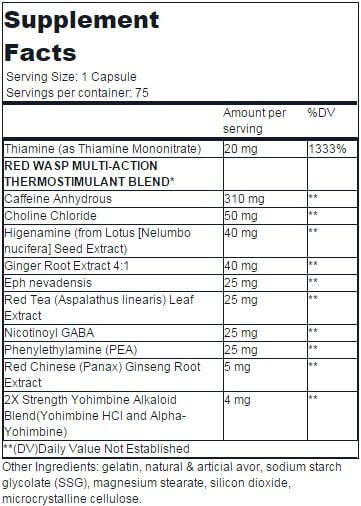