Haya Labs NAC is a specialized dietary supplement in tablets. It is an N-acetyl derivative of cysteine ​​- an endogenous sulfuric amino acid found naturally in our body. The product is recommended especially to athletes during periods of increased physical exertion, during increased susceptibility to stress and illness, and as an adjuvant in order to cleanse the body of toxins.

Cysteine ​​takes an active part in the synthesis of proteins, enzymes and is an amino acid characteristic of structural proteins. It is also essential in the synthesis of glutathione one of the most important antioxidants and detoxifiers of our body. NAC supplementation is one of the most effective ways to raise GSH levels. It is characterized by great ability to cleanse the body of toxins and free radicals. For this reason, it is commonly used in poisoning with certain drugs, as well as in numerous autoimmune and autoimmune diseases such as RA, Hashimoto.

NAC, by inactivating reactive oxygen species and reducing oxidative stress, protects cells from damage and supports the body's resistance. Increases endurance in athletes, improving their performance and susceptibility to fatigue. Facilitates expectoration, lung ventilation, gas exchange it supports oxygenation. It also speeds up post-exercise regeneration processes and reduces inflammation resulting from overloading. As a compound that supplies acetyl groups, it supports the production of testosterone. Due to the strong stimulation of regeneration of damaged liver cells (hepatocytes), some groups of athletes are used during and after the cycle using pro-hormones and steroids.

1 serving (1 tablet) once a day with a meal, drink water. Do not exceed the recommended portion for consumption. 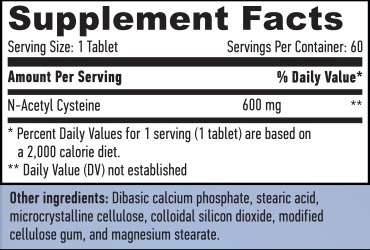