Lipodrene Elite is the most powerful lipodrene formula ever introduced on the market of supplements !

The new formula from Hi-Tech continues the line of Lipodrene burners, including the strongest ingredients: synephrine, strong isomers of phenethylamine and one of the newest ingredient never before used in slimming preparations - Extract Erythroxylum Coca. The leaves of coca plants contain valuable alkaloids and have been chewed and eaten as tea for thousands of years in high Andes.

The plant is rich in many essential nutrients. Scientific research has confirmed that in their natural form the leaves are completely safe and do not cause any addiction. Traditional medical applications of coca leaves are primarily stimulation to overcome fatigue, hunger and thirst. The stimulating effects of coca leaves were increased by combining with DMAA caffeine and phenylethylamine alkaloids.

Cocaine alkaloids are unique in that they have the ability to release catecholamines, such as norepinephrine, dopamine and serotonin.

Dopamine is a neurotransmitter that helps control the pleasure center in the brain and emotional reactions.

The effects of using Lipodrene Elite include:

- quick results in the loss of a large amount of kilos

Erythroxylum Coca Leaves - helps in slimming, reduces appetite, increases energy and prevents fatigue. Ideally suited for people exercising on a diet. It is an extract from coca leaves, which has no illegal substances. The use of coca leaves is also a great way to relieve the pain and nausea that accompany an unhealed stomach.

Senegalia Berlandieri - helps improve mood, feel good, and gives a nice boost of energy when you need it. The plant is the source of many alkaloids, including: N-methylphenylamine, tyramine and phenylethylamine. Berlandieri's Senegalia affects energy growth, increased motivation to act and improve well-being. The effect of its action is to increase the level of dopamine, serotonin and adrenaline in the body. Extract from the raw material Senegalia Berlandieri also increases lipolysis and boosts the metabolism.

Citrus Aurantium - bitter orange, is not an edible fruit but it is an excellent source of vitamin C, the amount of which in the extract can reach even 42%. Bitter oranges are much richer than just vitamin C, but also antioxidants, such as bioflavonoids, such as hesperidin. In addition to the high content of perfectly digestible vitamin C, the bitter orange is primarily known for its consistency in the synephrine plant, which is a natural substitute for ephedrine. Synephrine has a similar structure to ephedrine. It is obtained in a natural way, from immature citrus fruit, e.g. Citrus uranium L., Citrus aurantium L. This substance is a natural substitute for ephedra. Increasingly, it is added to drugs and dietary supplements intended for athletes as well as overweight people. This compound boosts metabolism, reduces appetite and at the same time increases mental and motor activity. Synephrine increases blood pressure and affects the minute volume of the heart. It widens the bronchi to facilitate breathing, effectively clears the sinuses and improves well-being.

Caralluma Extract - is a popular edible cactus from India. It grows abundantly throughout India. It is part of the diet of several indigenous Native American populations. For millennia in Indian culture, he helped suppress appetite during long hunts and famine. Supplementation C. fimbriata reduces obesity and in combination with diet and physical activity triggers spectacular results in the loss of unnecessary kilograms. The plant effectively suppresses the appetite for sweet snacks and prevents snacking of unhealthy snacks during the day.

Naringin - a flavonoid found in grapefruit. It increases the rate of metabolism, enhances lipolysis, strengthens blood vessels, has anti-inflammatory properties and lowers cholesterol.

6.7-dihydroxybergamotine - increasing the survival of the hormones, including testosterone and its precursors, taken and selected in the body, increases the effectiveness of their anabolic properties.

5-HTP (5-hydroxytryptophan) - used in medicine as an adjuvant to a slight extent treatment of depression and insomnia. Due to the presence of melatonin, improving the quality of sleep also improves regenerative processes. 5-HTP is a component of preparations supporting the production of growth hormone and is part of some fat reducers (limiting appetite).

Yohimbine - as the only substance burning unnecessary fat shows the ability to shape the figure in specific places. Yohimbine is great for burning so-called. "persistent fat" like the belly (thigh), thighs or buttocks. The most important effects of applying Yohimbine HCL is the precise degreasing of the body in places where it is particularly difficult to get rid of it due to poor blood supply.

1 capsule 3 times a day on an empty stomach. 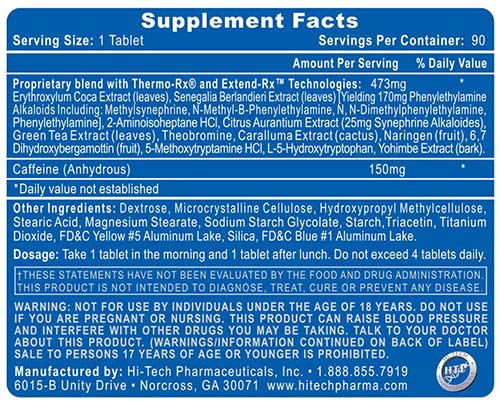