Hydra Shred Top Secret Nutrition is a new diuretic designed for women that allows you to quickly get rid of unwanted water and eliminate puffiness. The advanced formula quickly supports weight reduction, replenishes valuable electrolytes and allows you to maximally emphasize the developed muscles.

Hydra Shred ™ is a natural diuretic supplement for women, which helps to get rid of the excessive amount of water accumulated in the tissues, helping to emphasize the figure.

Hydra Shred ™ also includes Vitamin B6 to help reduce fluid retention, especially in women with PMS. The burner contains unique, strong ingredients supporting muscle tissue, better vascularity, helping to remove excess water from under the skin as much as possible. The comprehensive formula of the diuretic with the addition of electrolytes, potassium and magnesium has a positive effect on water management and helps to maintain muscle mass.

Uva Ursi Extract - this plant, commonly used in medicine, is known as bearberry. Due to its composition, it is widely used in diseases of the urinary tract, digestive system and gastric problems. It contains ingredients such as gallic acid, cholic acid and the natural flavonoid isoquercetin. These substances are slightly diuretic and cleanse the body of unnecessary and harmful metabolic products. They reduce the toxicity of many compounds and eliminate the effects of free radicals. The use of bearberry causes increased urine output, getting rid of excess water from the body, along with removing toxins. In addition to the beneficial effect on the condition of internal organs, it is correlated with an improvement in the definition of the muscle due to the loss of subcutaneous water.

Dandelion Extract - is a very strong diuretic (dehydrating substance). It is the most powerful herb that helps get rid of subcutaneous water. In addition, he is credited with detoxifying and cleansing properties, and accelerates metabolism. Its root contains a lot of mineral salts, especially potassium, organic acids, sterols, inulin, and choline.

Horsetail Extract - it has remineralizing and diuretic properties and has a protective effect on the urinary tract.

Buchu Extract - birch beech is perfect for urinary tract infections and is responsible for the proper functioning of the kidneys. It shows diuretic and antiseptic properties, and inhibits urinary tract infections. Flavonoids contained in Agathosma betulin, such as hesperidin and diosmin, have a beneficial effect on the functioning of the circulatory system, strengthening blood vessels and preventing atherosclerosis.

Green Tea Extract - catechins in green tea inhibit an enzyme called catechol-O-methyltransferase or COMT, which actually breaks down the fat burning hormone norepinephrine. Since green tea is rich in catechins, it helps to raise norepinephrine levels, keep it elevated and prolong thermogenesis. It has also been shown that there is a synergistic interaction between caffeine in green tea and catechins (particularly EGCG) in green tea, which increases the body's use of calories as energy. Moreover, the combination of caffeine and EGCG in green tea was found to significantly increase the resting metabolic rate.

Bladderwrack Extract - is a type of algae that has been used in medicine for centuries. The main use of the herb is to stimulate the thyroid gland in the treatment of overweight and obesity. The high content of iodine stimulates the thyroid function, which significantly increases metabolism.

Ginger Root Extract - adaptogenic herb, has long been used to facilitate the adaptation of the body to all everyday stressful situations, making it an ideal ingredient for the preparation. This ingredient will help revive your mind and body to increase memory and relieve fatigue. Thanks to the use of ginseng, you will become calm, balanced and you will make informed decisions.

Ashwagandha Extract - a medicinal plant used in traditional eastern medicine; It is called Indian ginseng because of its adaptogenic properties, i.e. increasing the body's resistance to stress factors, stabilizing the mood and regulating the functioning of the immune system. In alternative medicine, it is used as a remedy for rheumatism, exhaustion, sexual impairment and memory impairment. It contains many biologically active substances, incl. nicotine alkaloids, beta-sitosterol, withanolides (including withanolide D), coumarins, sitoindosides, chlorogenic acid and vitaferin A.

Capsimax - a formula based on the alkaloid found naturally in pepper. Capsaicin helps increase and maintain lipolysis (fat burning) in people prone to fat. When consumed with food, capsaicin can increase total energy consumption and carbohydrate oxidation, and slow down lipid oxidation for a short period of time (up to two hours).

Vitamin B6- is a coenzyme of many enzymatic changes in the body, including transamination and decarboxylation of amino acids. Its participation in the transformation of tryptophan, which produces serotonin and nicotinic acid, is particularly important. It is essential in the process of phosphorylation, influences glycogenesis and glycogenolysis in muscles, and plays an important role in immune and hematopoietic processes. It reduces the secretion of prolactin, which has a negative effect on male libido. Symptoms of pyridoxine deficiency are nonspecific: skin lesions, inflammation of the tongue and oral mucosa, seizures, hypochromic or megaloblastic microcytic anemia, polyneuritis, depression. Its lack may favor the development of oxalate urolithiasis. Pyridoxine is well absorbed from the gastrointestinal tract. Its excess is excreted in the urine.

Magnesium - helps in maintaining electrolyte balance, healthy teeth and healthy bones. It contributes to the maintenance of proper energy metabolism and reduces the feeling of fatigue and weariness. It supports the proper functioning of muscles, the functioning of the nervous system and the maintenance of proper psychological functions. It supports protein synthesis and plays an important role in the process of cell division.

Potassium- is one of the most important elements of fluid present inside every living cell. Its most important functions include regulation of the water and mineral balance of the organism, participation in the proper conduction of nerve impulses and in protein synthesis. Insufficient supply of potassium often results in weakened muscle strength, and thus less effective training. For the proper functioning of muscle cells, it is necessary to maintain their proper hydration, the ability to stimulate under the influence of nervous stimuli, as well as sufficient nutrition. Many studies have shown that decreased potassium levels are manifested by increased nervousness, impaired concentration, decreased response to stimuli, and a general feeling of fatigue and weariness. For this reason, supplementing the diet with this ingredient is very important, especially for physically active people. 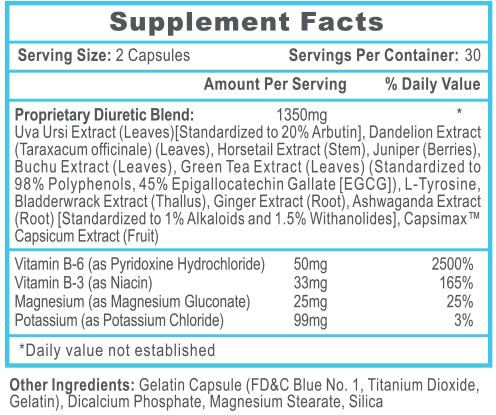