HI-TECH Pharmaceuticals FASTIN is a powerful fat burner comparing only the most effective among currently available on the market substances dedicated to weight reduction.

The product Fastin, by affecting the level of selected hormones and neurotransmitters, interference with the activity of appropriate receptors and enzymes, and improving the insulin-carbohydrate and fat metabolism, allows an extremely fast loss of unnecessary fat tissue, both during intense workouts and outside the training time. While ensuring psychological well-being and maintaining full willingness to act, it allows for easy traveling, often severe moments of reduction.

Phenylethylamine - is a naturally occurring fraction in chocolate called the "substance of euphoria and joy". Phenylethylamine (PEA) increases concentration, gives a feeling of well-being and adds energy.

Synephrine is a natural extract obtained from immature fruits of bitter orange, which by stimulating beta-3 receptors gives a strong thermogenic and lipogenic effect. It also increases the daily energy expenditure. Studies show that synephrine also has a fatigue-reducing effect and helps to maintain focus for a long time during increased mental strain.

Theobromine is a purine alkaloid found in cocoa beans as well as in tea and yerba mate. It stimulates heart activity and dilates blood vessels, it can lower blood pressure, but this has not yet been confirmed in reliable studies. In its pure form, theobromine is sparingly soluble in water, has a whitish color, crystalline structure and is bitter.

2-Aminoisoheptane - a strong stimulant with an effect similar to DMAA. It affects the central nervous system by increasing the level of dopamine and norepinephrine. Intensive workouts combined with the use of DMHA give phenomenal results in the form of suppressing appetite, reducing body fat, increasing memory and creativity, and reducing anxiety by preventing fatigue. The preparation is an interesting alternative for people who are delighted with the effects of DMAA, but show poor tolerance to this stimulant. The chemical structure of DMHA and DMAA is very similar, therefore their action is similar.

Yohimbine HCl is the purest available form of yohimbine, which works by blocking α2-adrenergic receptors, densely located in areas resistant to reduction of fat, ie in the lower abdomen, hips and thighs, which allows for increased fat burning in these areas. Yohimbine also increases noradrenaline secretion, increasing exercise capacity and accelerating metabolic rate. 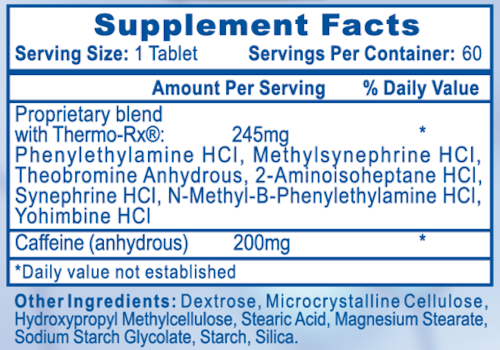