Redcon1 Fade Out is a new supplement rich in the most effective, proven ingredients that allow you to fall asleep peacefully and regain strength after intense workouts with the use of stimulants. The preparation is ideal for problems with falling asleep due to both excessive stimulation after using pre-workout and as a sleeping preparation after a hard, stressful day. Sleep is extremely important for regeneration, muscle growth, and for optimal brain function.

The advanced Fade Out formula, rich in 3 g GABA, Mucuna Pruriens, Melatonin and Phenylalanine extracts increases the regenerative processes during sleep, improves the functioning of the nervous system, fights anxiety and excessive stimulation. Hops, chamomile, valerian and l-theanine extract are natural sleep enhancers, stabilize the mood, have a calming effect, and reduce stress symptoms. Redcon1 Fade Out is a comprehensive sleep supplement that also provides L-phenylalaine - a precursor to dopamine. Acting in synergy with Mucuna Pruriens, it promotes relaxation and helps reduce anxiety.

Vitamin C - is one of the most important water-soluble vitamins. Unfortunately, the human body is unable to produce vitamin C on its own, like most plants and animals do. According to nutrition standards, the daily requirement for vitamin C for the Polish population is 90 mg for an adult male and 75 mg for a female. In some circumstances, the need for this substance increases dramatically. Under the influence of such factors as stress, intensive training, illness or abuse of tobacco and alcohol, the body needs to be supplied with higher doses of vitamin C.

Vitamin E - inhibits LDL cholesterol oxidation, thanks to which it prevents the formation of atherosclerotic plaque. It actively participates in the synthesis of anticoagulants, maintaining proper permeability of cell membranes and minimizes the phenomenon of platelet aggregation, which is why it effectively prevents the formation of clots in blood vessels. It is recommended for people with high blood cholesterol. It can be used for prevention against myocardial infarction.

Vitamin B6 - is a coenzyme for many enzymatic transformations in the body, including amino acid transamination and decarboxylation. Particularly important is its participation in the transformation of tryptophan, which produces serotonin and nicotinic acid. It is necessary in the process of phosphorylation, affects glycogenesis and glycogenolysis in muscles, plays an important role in immune and hematopoietic processes. It reduces the secretion of prolactin, which has a negative effect on male libido.

Magnesium - helps maintain electrolyte balance, healthy teeth and bones. It helps to maintain normal energy metabolism. Supports the proper functioning of muscles, the functioning of the nervous system and the maintenance of normal psychological functions. In addition, it supports protein synthesis and plays an important role in the process of cell division.

Zinc - one of the most important minerals for the human body, which can be seen in the case of its deficiencies negatively affecting health and functioning. It is a professional preparation that was created for people who know their needs and are looking for high-quality products that will be able to cover them. It is an element of many enzymes that condition the proper course of metabolic processes, but also take part in the process of DNA and RNA synthesis. Zinc conditions normal bone mineralization, accelerates wound healing and has an effect on blood pressure.

GABA - is the main neurotransmitter of the body, which reduces the excitability of neurons throughout the entire nervous system. GABA supplementation helps increase the amount of alpha waves in the brain, which supports the state of "deep relaxation", helping to remain calm in the face of stress. GABA not only succeeded in promoting relaxation, but also reduces anxiety, which is especially beneficial for people trying to "open" in social situations, which translates into ease in making new friends.

Arginine - dilates blood vessels and improves blood circulation by providing the right amount of oxygen and nutrients to the muscles. It participates in the synthesis of proteins, increases physical endurance, reduces the level of bad cholesterol in the blood, and also supports the functioning of the immune system.

Phenylalanine - is an essential (essential) amino acid, which means that it is not synthesized by the body and must be supplied with food. It belongs to the group of 20 amino acids encoded by DNA, which are the basic building blocks of most naturally occurring proteins. In the body, it plays its role primarily as a precursor to another amino acid - tyrosine and a psychoactive compound - phenylethylamine (PEA).

Valerian - also known as valerian, is one of the most popular ways to deal with stress and high nervous tension. It allows you to quickly calm down, reduces anxiety and great nervousness. In addition, it facilitates falling asleep and restful sleep all night. Valerian owes its action to numerous active ingredients such as valeranone, walerenal, isovaleric acid esters or flavonoids. Some of these ingredients allow you to activate GABA receptors, thanks to which the brain quickly cuts off from unnecessary and stressful stimuli, providing instant silence.

Ornithine - is an intermediate amino acid in the urea cycle - similar to arginine and citrulline. Perhaps due to its effect on the reduction of ammonia in the body, ornithine reduced fatigue by 52% after a long endurance test (2 hours cycling). Even more impressive are the effects of ornithine in combination with caffeine. Although the benefits of caffeine are well known, the intake of 250 milligrams of ornithine HCl plus 100 milligrams of caffeine has significantly increased vigor and reduced fatigue relative to caffeine alone.

Theanine - theanine is a non-protein amino acid found naturally in green tea leaves - camellia. Has psychoactive properties because it easily overcomes the blood-brain barrier. It stabilizes the mood, calms down, reduces the symptoms of stress and anxiety. Also used as a nootropic agent - improving cognitive functions, work efficiency and learning effectiveness. Researchers have proven Theeanin's effectiveness in increasing attention, alertness and productivity, and the effects are already visible within the first hour after administration. Researchers believe that theanine is responsible for the relaxing effect of green tea, which affects the intensity of alpha brain waves, probably by affecting the activity of some neurotransmitters, including dopamine and serotonin. It is amazing that this amino acid can increase alertness and mental clarity, while introducing a state of relaxation and deep relaxation strongly enough to withstand the stimulating effect of caffeine.

Chamomile Extract - chamomile extract is responsible for a pronounced anti-anxiety and relaxing effect. It can reduce the effect of snoring, thanks to which it improves sleep comfort, and protects against dangerous sleep apnea. What's more, because of the high content of bioactive ingredients, chamomile also has anti-inflammatory properties. It also improves immunity (works very well in the most common colds), and improves the functioning of the circulatory system.

Hops Flower Extract - hops flower extract has been used not only in beer production, but also in medicine, because it has numerous medicinal properties. Hops are a proven remedy for insomnia and sedation. It will also help alleviate menopausal symptoms, radiculitis and get rid of dandruff. Check what other properties hops have.

Melatonin - an organic chemical compound - a tryptophan derivative that plays the role of 'sleep hormone' in the human body. It is produced in the pineal gland, and more specifically in special cells called pinealocytes. Melatonin is somewhat related to another important neurohormone - serotonin. Through several chemical reactions, serotonin changes to melatonin when the need arises (and the conditions are right). Melatonin can also be used for shift work - when you have to go to sleep at unusual hours, or when 'hours are shifted' in the case of the Jet Lag phenomenon. Melatonin is a powerful antioxidant - it reduces oxidative stress and thus prevents the cells from dying out.

1 scoop 30 minutes before bedtime for the first 3 days of use, then 1 scoop. Do not exceed the recommended dose. 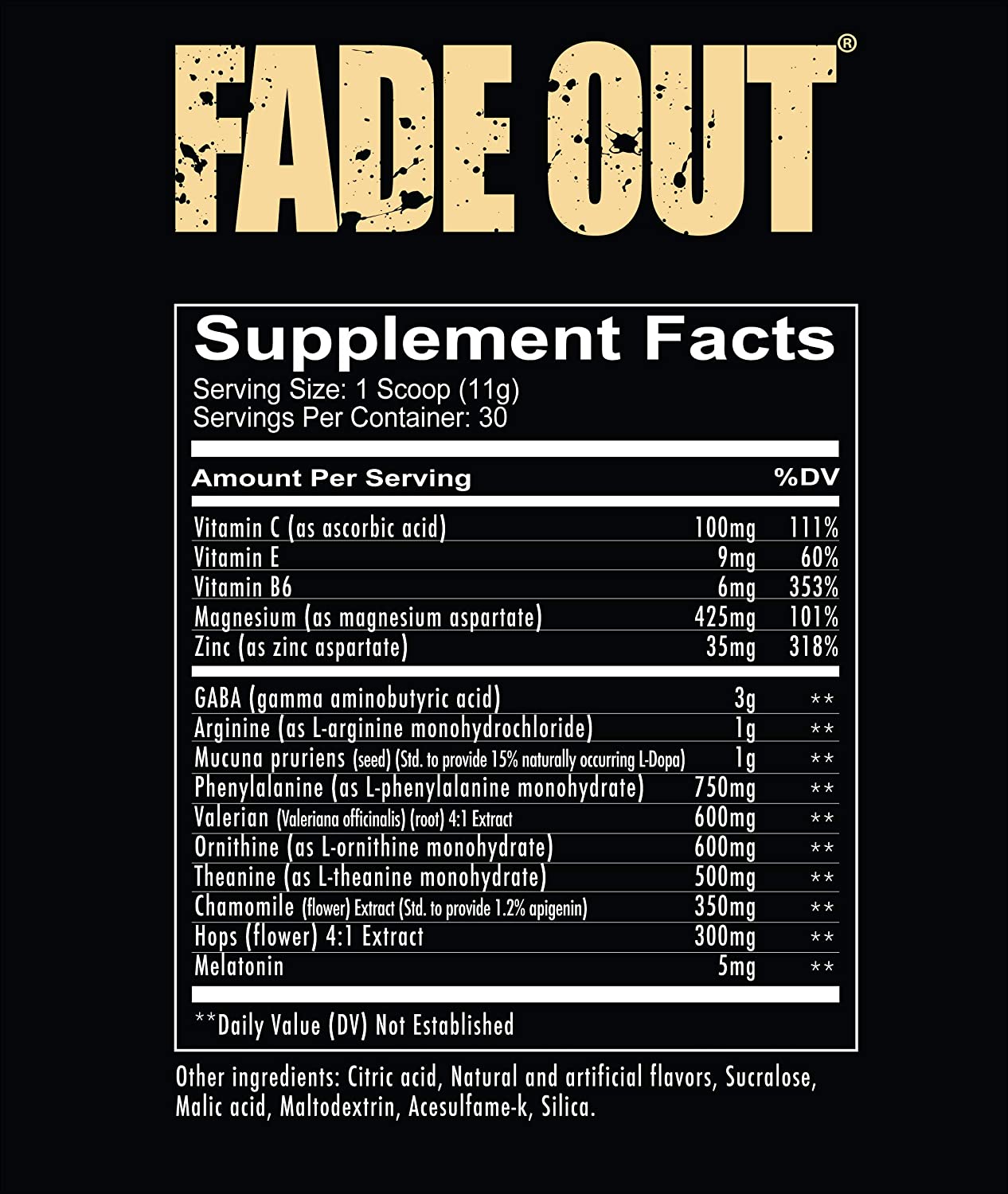