EverBuild Nutrition CreaBuild is a high-quality dietary supplement whose activity is based on the activity of four perfectly complementary forms of creatine enriched with taurine.


The effects and benefits of Crea Build

Crea Build is an innovative creatine stack with the addition of taurine. It includes as many as 4 forms of creatine - creatine monohydrate, buffered creatine monohydrate, creatine malate and creatine hydrochloride. Taurine acts as a creatine transporter, which stimulates the acquisition of energy from phosphagen, a mechanism that prevails during strength, interval and sprint training.

Creatine HCl - a compound also known as: creatine hydrochloride, which is a combination of creatine and a hydrochloride in one molecule. It is characterized by a high concentration of the leading compound in the molecule, good solubility and unacceptable taste. It is a substance well tolerated by the gastrointestinal tract. The effects of using it in practice are considered one of the best among all easily available forms of creatine on the market. He is currently the most popular figure among all the innovative creatine combinations available for sale.

Creatine Malate (Tricreatine malate) - Malate as a glucose metabolite belonging to the group of hydroxy carboxylic acids stimulates insulin and excellently supports the transport and uptake of creatine by muscle cells in both resting and exercise metabolism.
Creatine malate is a form of creatine, better soluble and digestible, longer stored and more effectively converted into active phosphocreatine than traditional creatine supplements. Creatine consumption contributes to the increase of physical fitness during short-term, repetitive exercises of high intensity (the effect relates to consumption of 3 g per day).

Buffered creatine monohydrate (KRE-ALKALYN) is a patented form of creatine monohydrate with high bioavailability, much more efficiently supplementing the creatine resources in muscle tissue than the usual monohydrate. It stores and transports phosphate groups for the synthesis of proteins and contractions of muscle fibers.

Taurine - an amino acid whose particularly high concentrations are noted in highly developing organisms. Affects cognitive abilities, it is often recommended as an effective form of support for learners. It improves mental functions, it also has a positive effect on the mood. The effectiveness of taurine in this field is so important that it is recommended as one of the means to eliminate discomfort caused by excessive alcohol consumption. Increased supply of taurine also promotes an efficient energy management of the body. This amino acid acts as a creatine transporter, which stimulates the acquisition of energy from phosphagen, a mechanism that prevails during strength, interval and sprint training.

Crea Build is a product with pharmaceutical purity and quality guaranteed by Everbuild Nutrition technicians to ensure peace and security for the end user.

It is recommended to use 1 portion daily. On training days, use before training. 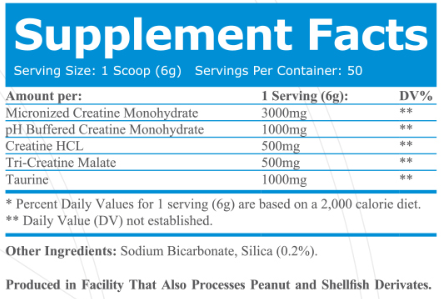