HBCD - highly branched cyclic dextrin (HBCD) is a variation of the popular source of maltodextrin carbohydrates. The component is produced by the enzymatic treatment of amylopectin, a polysaccharide, which is also a component of starch. The process produces a high molecular weight carbohydrate, higher solubility, and less sweet and starchy taste.

GlycoPump - a highly concentrated form of glycerol powder made in Germany. GlycoPump® effectively prevents dehydration, increases performance and affects the achievement of a muscle pump. Recommended especially during endurance training. The ingredient improves performance and promotes strength during training, also supports blood flow to the muscles. Glycerol provides adequate muscle hydration and minimizes the effects of dehydration. The GlycoPump® ingredient starts working 15 to 25 minutes after ingestion.

CocoMineral - Coconut powder extract contains key sodium and potassium electrolytes that can help replenish electrolytes lost during training. CocoMineral® is characterized by low fat and carbohydrate content, which is why it is ideal for replenishing glycogen stores after exercise.

Creatine HCL - a compound also known as: creatine hydrochloride, which is a combination of creatine with a hydrochloride in one molecule. It is characterized by high concentration of the leading compound in the molecule, good solubility and unacceptable taste. Is a substance well tolerated by the digestive tract. The effects caused by its use in practice are considered one of the best among all easily available forms of creatine on the market. Currently, he is the most popular character among all the innovative combinations of creatine available for sale.

Creatine AKG - is a salt formed from alpha-ketoglutaric acid (AKG) and creatine. Thanks to the latest technological advances, creatine-AKG creation has increased the effectiveness of creatine. Thanks to its easy absorption, it increases the building of new muscle cells, maximizes creatine concentration and has a much more effective anabolic effect.

Tri-Creatine Malate - thanks to its ester bonds between creatine and malate, it is characterized by greater digestibility and bioavailability, thanks to which less creatine is converted to inactive creatinine. Creatine malate after conversion in the body to phosphocreatine, actively participates in the production of the high-energy compound which is adenosine triphosphate (ATP). ATP, in turn, is an instant source of energy in short-term efforts lasting up to several seconds. Supplementing the diet with creatine is aimed at increasing the body's energy reserves by increasing the amount of phosphocreatine in the muscle cell. Increasing the body's energy reserves can contribute to increasing the intensity of the workout, and thus to increasing its effectiveness in building muscle mass or strength.

Creatine Monohydrate - is an organic chemical compound formed in the process of metabolism. Occurs mainly in muscle cells. Under the influence of the enzyme (creatine kinase) it is transformed into phosphocreatine, which allows faster reconstruction of ATP (breakdown of high-energy ATP bonds provides energy for maximum short-term muscle contractions). Supports protein synthesis, improves the body's exercise capacity.

Creatine Citrate - a combination of creatine and citrate molecules, which effectively increases the bioavailability of creatine and increases its absorption. Citrate alone is a supplement to creatine due to its participation in metabolic changes. Creatine primarily causes an increase in the concentration of phosphocreatine in the muscles, which results in an increase in muscle mass as well as training endurance.

Creatine Pyruvate - creatine pyruvate. Creatine and pyruvic acid are naturally synthesized in the human body and used in particular by muscles. Thanks to the unique combination, the obtained compound is up to 5 times more effective than each of them individually. The reason for this is the excellent bioavailability and bioavailability of creatine pyruvate. About 95% of the body's creatine resources are found in skeletal muscle cells. These cells are able to store more creatine than the sum of creatine supplied with a daily diet and synthesized by the body. Creatine supplementation will increase its content in your body. A significant increase in the level of creatine in the body occurs approximately within 30 days. 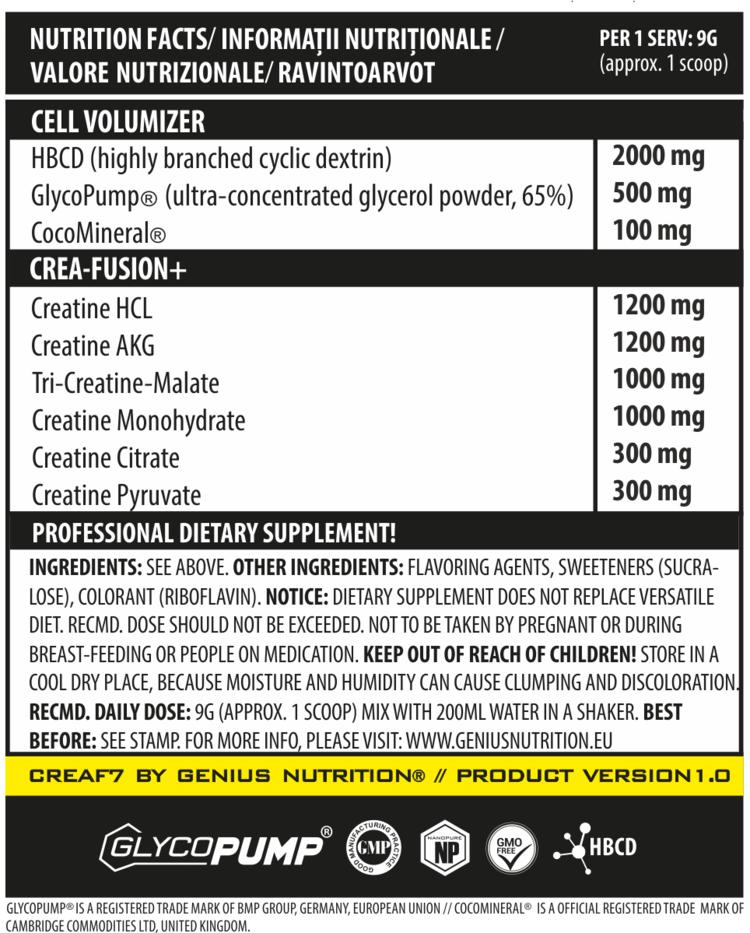