APS Carnisport is a combination of five forms of L-carnitine (Carnitine Silicate, GlucoCarn, Propionyl L-Carnitine, Propionyl L-Carnitine, L-Carnitine Tartrate) with the addition of epigallocatechin gallate, vitamin B6 and niacin. The supplement reduces fat by transporting fatty acids to mitochondria, where they are converted into energy, and also participates in carbohydrate metabolism.

Niacin - supplementation with niacin also brings benefits for the immune system. Studies show that the systematic use of vitamin B3 leads to an increase in neutrophil count. They are white blood cells that allow the destruction of pathogenic microorganisms in the form of bacteria. Vitamin PP also leads to an improvement in the functionality of the central nervous system. The increase in activity in the mitochondrial nuclei, which are located in the nucleus accumbens, contributes to the improvement of the human mental condition, which is manifested by: increased confidence, reduced effects of felt stress and reduced anxiety.

Vitamin B-6 - is a coenzyme of many enzymatic transformations in the body, among others amino acid transamination and decarboxylation. Particularly important is its participation in the transformation of tryptophan, which produces serotonin and nicotinic acid. It is necessary in the process of phosphorylation, affects glycogenesis and glycogenolysis in muscles, plays an important role in immune and hematopoietic processes. It reduces the secretion of prolactin, which has a negative effect on male libido. Symptoms of pyridoxine deficiency are non-specific: skin lesions, glossitis and oral mucosa inflammation, seizures, non-pigmented or megaloblastic anemia, polyneuritis, depression. Its lack may favor the development of oxalate urolithiasis. Pyridoxine is well absorbed from the gastrointestinal tract. Its excess is excreted in the urine.

Carnitine Silicate - is a mixture of carnitine, inositol and potassium silicate, which combine the ergogenic properties of carnitine and silicate in a stabilized form, which increases bioavailability. The greater bioavailability of carnitine means greater absorption, which leads to increased fat oxidation, greater weight loss and enhanced insulin action.

GlucoCarn - a combination of l-carnitine ester and glycine. This combination promotes the bioavailability of the molecule. GPLC has a supporting effect of nitric oxide production, which greatly supports the body during training effort. The compound effectively supports fat reduction and contributes to building lean muscle mass, increases strength and endurance.

Propionyl L-Carnitine HCL - a long-chain carnitine fatty acid carnitine that facilitates the transfer of long-chain fatty acids from the cytoplasm to mitochondria during fatty acid oxidation.

L-Carnitine Tartrate - a combination of L-carnitine and L-tartrate into one molecule, which is designed to support the body's hormonal response by reducing damage to anabolic receptors. Research shows that LCLT helps to increase testosterone uptake and use it to build muscle proteins.

Epigallocatechin Gallate - short for epigallocatechin gallate, is the most known and studied catechin present in green tea. It has been proven to have a positive effect on the cardiovascular system. They are also effective in burning fat. EGCG has been shown to induce lipolysis, and when combined with caffeine, the effects are even more pronounced. 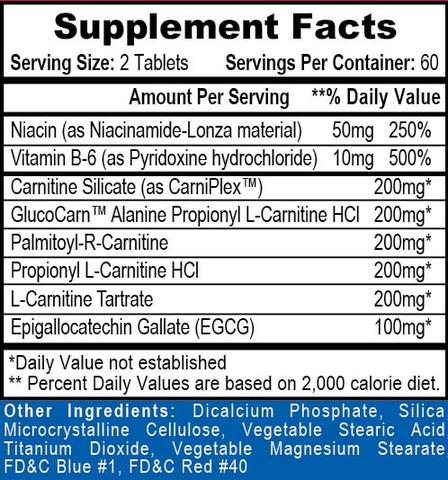