Genius Nutrition Bulk XT is a new, high-protein bulk conditioner providing high-quality calories. Perfectly supplements nutrients: proteins, carbohydrates, vitamins and minerals to increase the amount of calories consumed with the diet. Thanks to its unique composition, it meets the needs of advanced athletes who burn large amounts of calories during the day by performing strenuous exercises.

It allows you to increase muscle mass even for very slim people. BULK-XT also contains highly digestible creatine, which has a positive effect on muscle strength and endurance, especially during long and intense workouts. The formula is enriched with high-quality carbohydrates and vitamins that support general health and increase immunity, and at the same time contribute to the reduction of fatigue.

Tricreatine Malate - thanks to its ester bonds between creatine and malate, it is characterized by greater digestibility and bioavailability, thanks to which less creatine is converted into inactive creatinine. Creatine malate, after being transformed into phosphocreatine in the body, takes an active part in the production of a high-energy compound, which is adenosine triphosphate (ATP). ATP, in turn, is an instant source of energy in short-term efforts lasting up to a few seconds. Supplementing the diet with creatine is aimed at increasing the body's energy reserves by increasing the amount of phosphocreatine in the muscle cell. Increasing the body's energy reserves may contribute to increasing the intensity of training, and thus to an increase in its effectiveness in building muscle mass or strength.

L-Glutamine - is one of the most common amino acids in the body. It is part of skeletal muscle proteins and plays a significant role in nitrogen metabolism. Thus, it affects many aspects that translate into the results achieved by the athlete (both in the form of gains in muscle mass and strength).

Maltodextrin - a polysaccharide consisting mainly of glucose. Maltodextrin is a complex carbohydrate. It is very easily digestible and is quickly digested in the human digestive tract. It is an easy and quick source of energy.

Dextrose - a simple sugar intended for people involved in both strength and endurance sports. By reducing the activity of water, it has a preservative effect and also reduces the process of protein denaturation. The right amount of dextrose is beneficial in the post-training phase because it is responsible for the transport of nutrients to the muscle cells.

Zinc - Supports cardiovascular and neurological health, and helps maintain good vision in the elderly. Age-related decline in immunity is partly due to the diminishing size and function of the thymus gland.

Magnesium - is one of the most important minerals in the body. It is essential as a cofactor in hundreds of enzymatic processes in cells. It helps maintain normal muscle and nerve function, maintains a steady heart rate, supports the healthy functioning of the circulatory system, supports the immune system and keeps bones in good condition. Magnesium also helps maintain blood sugar levels and blood pressure, and is involved in energy metabolism and protein synthesis. Magnesium is the main factor in relaxing smooth muscles in blood vessels, thereby reducing peripheral vascular resistance and promoting a healthy cardiovascular system.

Dissolve the measuring cup in 250 ml of water or skimmed milk. Use 1-3 times a day. 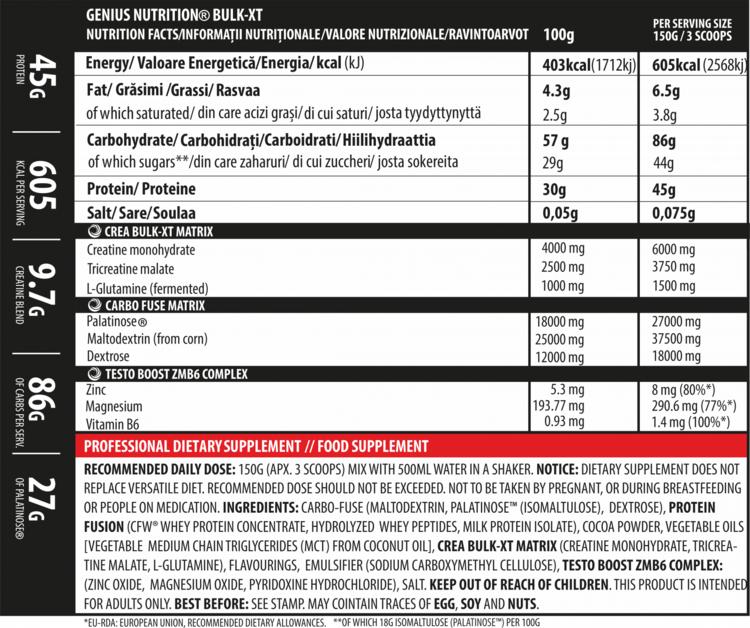