Vitamin C - is the basis for the structure of the skin, bones, cartilage, tendons, blood vessels and valves in the heart. Ascorbic acid is a powerful antioxidant, accelerates the decomposition of harmful substances formed under the influence of intense training, also effectively protects against infections. Another advantage of this vitamin is the improvement of iron absorption and improvement of oxygen transport to cells, which clearly translates into improved muscle condition. Effective absorption of oxygen extends the time of muscle work and delays the stage of anaerobic muscle breathing that causes soreness. In addition, vitamin C effectively leaches lactic acid from the muscles and thus accelerates the regeneration process after training. In addition, ascorbic acid affects the release of male hormones including testosterone which is desired by athletes.

Magnesium - helps maintain electrolyte balance, healthy teeth, and healthy bones. It helps to maintain normal energy metabolism and reduces tiredness and fatigue. Supports the proper functioning of muscles, the functioning of the nervous system and the maintenance of normal psychological functions. It supports protein synthesis and plays an important role in the process of cell division.

Creatine Monohydrate - a hydrated form of creatine, a non-protein compound naturally synthesized in the human body as a result of methylated glycocyamine. It enables the storage and transport of phosphate groups necessary for the production of high energy compounds, including adenosine-5'-triphosphate (ATP), providing energy supply to working and regenerating muscles. Supports glycogen storage. Increases water storage, the presence of which is required for numerous biochemical reactions. It has antioxidant properties that reduce oxidative stress caused by excessive training intensity.

Arginine AKG - is involved in the formation of nitric oxide and thus has the ability to dilate blood vessels, allowing better blood supply to muscles and soft tissues. It indirectly participates in the synthesis of cGMP, which, along with ATP, participates in the process of muscle contraction and has anabolic effects. It affects the secretion of growth hormone, supports the process of liver regeneration, is an important precursor for creatine. Unfortunately, but the traditional form of Arginine breaks down easily in the stomach and thus a small amount reaches its destination.

Ornithine AKG - a combination of ornithine and α-ketoglutarate molecules. The addition of α-ketoglutarate to ornithine increases the usual L-ornithine. Ornithine is an intermediate amino acid in the urea cycle - similar to arginine and citrulline. Due to its effect on the reduction of ammonia in the body, ornithine reduces fatigue by 52% after a long endurance test

Citrulline Malate - a combination of amino acid - citrulline with malic acid. Citrulline, despite not building muscle, has an important biological function by participating in the urea cycle. During metabolism, citrulline neutralizes toxic ammonia. Citrulline malate is a compound that increases the production of nitric oxide and thus increases the flow of blood to the muscles during training by causing a muscle pump. Studies show that citrulline malate given before training improves the body's ability to exercise and reduces fatigue. Another advantage of using the preparation is its ability to re-uptake of bicarbonate by the kidneys, which has a beneficial effect on the cash-base balance. In addition, the use of the supplement effectively reduces muscle acidification after a hard workout.

L-Carnosine - a dipeptide consisting of alanine and histidine. It naturally occurs in high concentrations in muscles and nervous tissue, supports muscle strength and increases cell integrity.

L-Norvaline - an organic chemical compound from the group of branched chain amino acids belonging to non-protein amino acids. Norwaline is an arginase inhibitor, thus increasing the concentration of arginine. The biologically active enantiomer is L-norvaline. Norwaline is used to regenerate muscle tissue after exercise. Its natural origin is nuts, meat and cereals. It intensifies the anabolic and anti-catabolic effects of arginine, affecting the increase of exercise capacity (strength and endurance) and causes more effective blood supply and nutrition of muscle tissue. Norwalin supports the delivery of nutrients and vitamins to the muscles, which enhances and accelerates muscle building.

Methylxanthine Complex - has a stimulating effect, reduces the level of adenosine, inhibits the breakdown of cAMP - thus strengthens the thermogenic processes occurring in the body (the release of energy generated during the burning of fats in the form of heat) and lipolytic (the breakdown of fats into free fatty acids).

Evodiamine - is an alkaloid with a thermogenic and stimulating effect, allowing for rapid fat burning with a capsaicin-like effect. The product Asia Black 25 uses its effective thermogenic potential in combination with caffeine as well as green tea as an element of supporting fat reduction, changing body composition for better and influences the aesthetics of the figure.

Vinpocetine - works within the cerebral vessels - increases blood flow in the blood vessels, improves the use of glucose and oxygen by brain tissue and contributes to the increase of cellular hypoxia tolerance. Thanks to this, it perfectly improves memory, facilitates concentration and increases mental performance. Vinpocetin has been used for many years to support the treatment of various ailments, from epilepsy, strokes to Alzheimer's disease. Over the past few decades, scientists have found that this relationship is able to enhance cognitive function. It has been proven that the key to improving mental performance is proper cerebral circulation. The action of vinpocetin in the body is mainly focused on improving cerebral circulation. It helps to expand the cerebral vessels and reduce vascular resistance. Thanks to this, oxygen, glucose and other important nutrients are delivered to the brain without any problems. Supplying brain cells with oxygen and essential nutrients is crucial for efficient communication between neurons and improving brain performance.

Grape Seed Extract - grape seeds are rich in antioxidants, including phenolic acids, anthocyanins, flavonoids and oligomeric proanthocyanidin complexes (OPC). Due to the high content of antioxidants, GSE can help protect against oxidative stress, tissue damage and inflammation, and prevent disease.

NAC - the acetylated form of L-cysteine, which is responsible for the regeneration of the body through the secretion of endogenous glutathione. In addition, the product supports regeneration and improves exercise parameters. Cysteine, among others, improves the body's antioxidant functions, increases the level of immunity, supports the fight against viruses or infections, acts anti-catabolic, protects muscle mass against burning.

Green Tea Leaf Extract- owes its slimming properties to catechins, namely a substance called epigallocatechin gallate (EGCG). Catechins contained in green tea extract have a significant impact on fat reduction. They inhibit the absorption of fats from food and increase their consumption by the body. In addition, green tea increases the activity of some enzymes responsible for the digestive process, has a positive effect on liver metabolism, increases thermogenesis and accelerates fat oxidation.

Na-R-ALA - a stable form of alpha lipoic acid that increases both insulin action and blood flow to improve nutrient delivery. Alpha lipoic acid (ALA) is a fatty acid that exists in the mitochondrion of every cell in your body and is strongly involved in energy production. Na-R-ALA is a form of ALA salt that significantly improves the bioavailability and absorption of fatty acids. Na-R-ALA is a powerful antioxidant that increases the variety of antioxidant enzymes in the body that reduce oxidative stress. More importantly, Na-R-ALA also reduces blood sugar levels and improves glycogen storage due to GLUT-4, which is an important glucose transporter in the body.

Taurine - is an essential component of energy drinks, helping the body draw energy from one of its favorite energy sources. Taurine plays many functions in the body: from supporting brain function, through transporting creatine to muscles, and supporting heart contractions. In the 1970s, when taurine was discovered to inhibit muscle catabolic processes, it also became anabolic while becoming extremely popular with athletes.

Ginger Root - adaptogenic herb, has long been used to facilitate the adaptation of the body to all everyday stressful situations making it an ideal ingredient in the preparation. This ingredient will help revive your mind and body to increase your memory and reduce fatigue. Thanks to the use of ginseng you will become calm, balanced and will make informed decisions.

Cinnamon Bark - cinnamon is a great addition to any blood sugar regulating supplement. The effects of cinnamon have been widely documented in various studies to lower blood glucose, reduce body fat, and increase lean muscle mass.

Fenugreek Seed Extract - an herb that has a pronounced stimulating effect on the increase in free testosterone. Saponins contained in fenugreek work in two ways. The first is to increase the release of CRH from the hypothalamus, which stimulates the pituitary gland to produce ACTH, which in turn increases the production of androgens in the adrenal cortex. The second way is to connect directly to the same receptors that testosterone connects to and exert anabolic androgenic effects. Has a positive effect on the overall level of androgens. Fenugreek stimulates the production of red blood cells, increases the absorption of nutrients in the small intestine, increases nitrogen retention in the body, stimulates protein synthesis, which stimulates myogenesis (development of muscle tissue), growth of cartilage, bone and connective tissue.

Piper Nigrum Fruit Extract - is one of the alkaloids of Piper nigrum, which is attributed to many positive properties, especially supporting digestion and assimilation of food. By increasing stomach acid production and stimulating the synthesis of proteolytic enzymes, it supports protein digestion. Mobilizing blood flow to the intestine and improving the functioning of transporters located in it, it improves the absorption of carbohydrates, amino acids, minerals, e.g. selenium, vitamins, including group B, coenzyme Q10 and other food components. 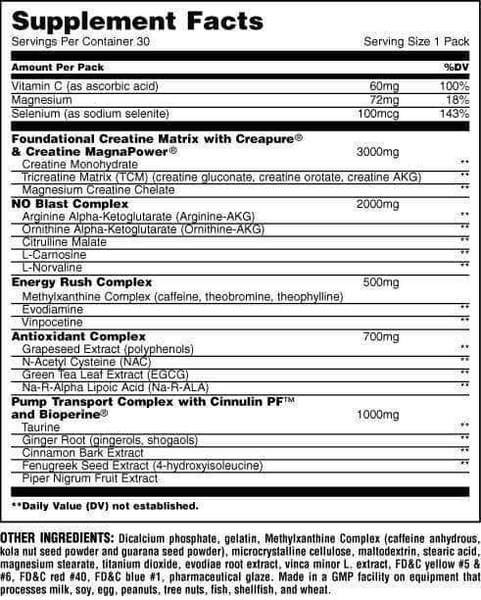