Brawn 7-oxo (3-acetyl-7-oxo-dehydroepiandrosterone) is a naturally occurring compound formed during the breakdown of dehydroepiandrosterone. This substance, though not known in Poland, is used on the large scale in the United States because of its many beneficial properties.

Fighting with unnecessary kilograms
7-oxo causes the potentiation of the action of triiodothyronine (thyroid hormone T3), and thus activation of thermogenesis in the body, which aims to produce as much heat as possible. The more energy is delivered, the faster fat loss will occur, and what's related to it - also weight.

The described compound increases the activity of enzymes that are responsible for the oxidation of lipids. In addition, it has a positive effect on thyroid hormone levels and their metabolism.

What's more, 7-Oxo accelerates resting metabolism (RMR), which results in the loss of excess body weight (fat). There are no side effects compared to conventional thermogenics.

Counteracting the aging of the organism
3-acetyl-7-oxo Dehydroepiandrosterone in the body decreases with age. Its concentration in the blood decreases dramatically after the age of 30, which may lead to a quantitative advantage of cortisol, and thus cause a negative impact on the behavioral state of man.

Insufficient amount of steroid in the body can cause holistic skin deterioration and increase the tendency to wrinkles. In addition to its effects on skin tone and elasticity, 7-Oxo may be responsible for skin hydration as well as for normal hair growth and sebaceous glands.

The described neurosteroid also has a neuroprotective effect. It contributes to the improvement of memory (mainly spatial) and concentration, facilitates learning and matching facts even in elderly people. It is also an antagonist of the GABA-A receptor and improves nerve conduction and synaptic transmission.

7-oxo reduces cortisol levels
7-oxo has a positive effect on the action of cortisol, which is sometimes called the "killer hormone". In the liver, the 11β-hydroxysteroid dehydrogenase type 1 enzyme stimulates inactive steroids, for example, converts cortisone to cortisol. 7-Oxo attaches to this enzyme, preventing corticosteroids. As a result, the level of these hormones (especially cortisol) is lower, because less of them is converted into active forms.

3-acetyl-7-oxo Dehydroepiandrosterone, in addition to the hormonal system, also multiplies CD-4 cells (auxiliary lymphocytes LiTh), neutrophils and white blood cells responsible for the primary immune response of the body. In addition, the described steroid prevents the aggregation of thrombocytes and thus the formation of blood clots.

In summary, it is a completely safe steroid designed for people who are struggling with overweight and obesity. It can be used to speed up metabolism, as well as prophylactically to increase immunity, prevent infections, counteract the aging of the body, relieve stress or improve memory and concentration. 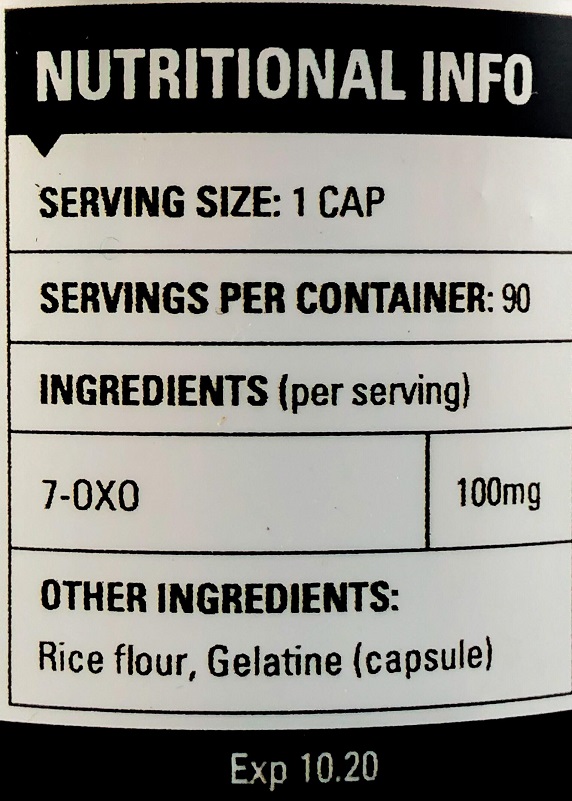