Nurabolic Nutrition Synedrex - the most radical agent available on the market, contains a powerful dose of active ingredients in one specially designed capsule that releases energy for up to 12 hours. In addition to a powerful injection of unprecedented energy, this product completely solves problems with appetite and snacking. The only available worthy successor of the legendary Merida.

Metabolic Nutrition Synedrex is without doubt the most effective means of suppressing appetite with a strong thermogenic effect and increasing energy levels for long hours. Synedrex is also the first burner in the world that offers a 4-stage metabolism. Synedrex works by addressing 4 areas that can slow down the metabolic rate. This revolutionary discovery changes the slow metabolism into a healthy rapid metabolism of old years.

The composition of the burner was developed on the laboratory based on research conducted by an experienced team of doctoral students of dieticians and technical consultants working for the company Metabolic Nutrition. Its effectiveness is confirmed by the formula repeatedly tested experimentally and clinically as well as numerous opinions of professional sportsmen using it as well as other users presented extensively on numerous sports forums.

Synedrex works in a similar way to iconic Sibutramine (but does not cause such side effects). It inhibits monoamine reuptake, which contributes to the increase in postprandial feeling of satiety (stimulation of the satiety center and inhibition of the hunger in the hypothalamus). It also causes an increase in thermogenesis, which together with the feeling of postprandial satiety leads to a reduction in body weight by reducing the amount of adipose tissue, especially visceral fat.

The Synedrex burner works in a multifaceted manner and is therefore extremely effective. It is due to appropriately selected proportions of ingredients that they act synergistically strengthening the final effect, instead of blocking each other as it happens in the case of other preparations that have a seemingly rich and varied composition, but are not so effective. The result of the uncompromising approach of Metabolic Nutrition is the agent, whose main components trigger powerful thermogenesis and drastically accelerate the effects of slimming.

Synedrex includes, among others:

Caffeine - The best of natural thermogenics. It stimulates the breakdown of fat tissue, thereby nourishing the muscles, which increases their efficiency, and also accelerates regeneration.

Eria Jarensis - acts as a neuromodulator on the central nervous system, giving many benefits to cognitive functions. Provides effects that improve mood by increasing the level of dopamine and nor-adrenaline in the body. Dopamine is responsible for increasing the sense of well-being, so the extract from Eria Jarensis provides a euphoric effect, and at the same time reduces the feeling of anxiety. Dopamine and noradrenaline are also associated with increased mental alertness and concentration.

Bitter Orange (standardized for synephrine, octopamine, n-methyltyramine) - Synephrine is referred to as a safe substitute for ephedrine, and the studies showed its similarity and proven to stimulate the central nervous system, accelerating blood circulation and increasing aerobic capacity. The extract is also standardized for the content of N-methyl-picramine and octopamine; these active substances further stimulate the breakdown of fats and help to suppress excessive appetite.

Yohimbine Hcl - is the pharmacological form of yohimbine alkaloid. As the only substance that burns superfluous fat, it has the ability to shape the body in specific places. Yohimbine is great for burning so-called. "persistent fat" like the belly (thigh), thighs or buttocks. The most important effects of applying Johimbina HCL is the precise degreasing of the body in places where it is particularly difficult to get rid of it due to poor blood supply.

Huperzine A - an alkaloid with the ability to penetrate the blood-brain barrier, which is a negative catalyst for the degradation of acetylcholine, improving nerve conduction and having a significant impact on concentration, association and memory. It helps to alleviate the effects of oxygen stress, prevents depression and has neuroprotective properties that improve well-being. In sports supplementation, it is recommended during pre-workout, pre-workout and during exercise, in order to improve concentration.

Naringin - It regulates metabolic processes, increasing the sensitivity of cells to insulin. It has strong detoxifying properties and also contributes to the reduction of harmful lipid fractions.

1 capsule in the morning in a special way. Do not exceed the recommended dose 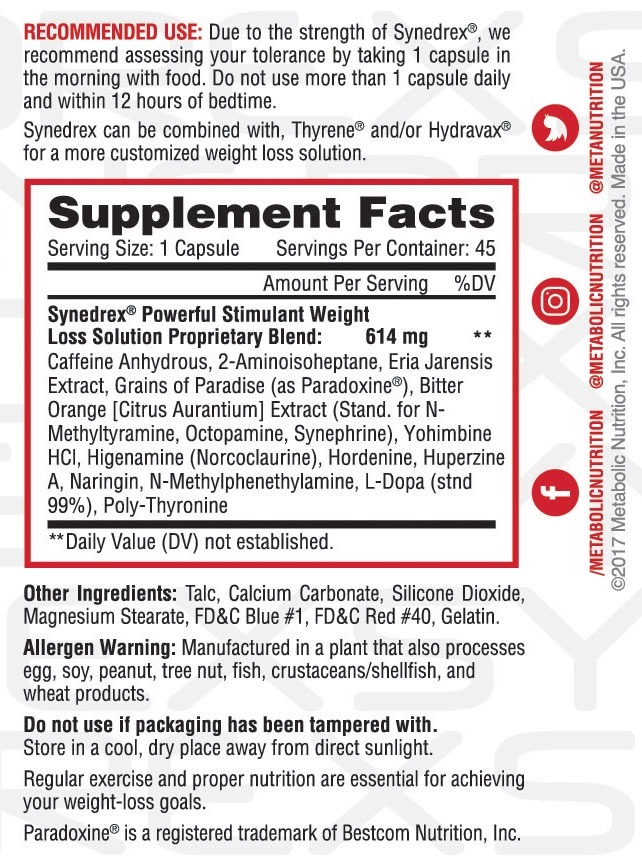 Users reviews
Number of reviews: 1 Average score: 5.00
Score:
Author: Marcin, Wrocław
strong burner, very effectively improved metabolism and helped to lose some unnecessary kg
To rate this product or to add a new review, you need to log in.
Recommended