Kevin Levrone Shaaboom Pump, a new pre-workout, rich in ingredients such as: citrulline malate, beta alanine, creatine monohydrate, AAKG. The advanced pumping formula contains proven ingredients that enhance the feeling of a muscle pump during training. Beta-alanine is responsible for increasing strength endurance, which translates into an increase in the muscle pump and perform more repetitions with a given weight during exercise. Shaaboom pump pre-workout is a perfect energy trigger for all pre-workout enthusiasts.

The formula increases the concentration of nitric oxide, supports anabolism and maximizes the growth of muscle mass and regeneration after training. The addition of caffeine ensures focus and increases efficiency during training sessions. For the best results, we recommend using Shaaboom Pump during a high-carbohydrate diet with strength training with increased repetitions, which significantly increases the feeling of a muscle pump.

Citrulline Malate - participates in the synthesis of nitric oxide (NO) and phosphocreatine and the oxygen metabolism of glucose, thus increasing the uptake of oxygen, glucose, amino acids and creatine and energy production through muscle cells. It reduces the concentration of lactic acid and ammonia in the muscles, allowing the body to recover energy faster by increasing the level of creatine phosphate and re-synthesizing ATP. Citrulline malate is a much more effective form than high doses of arginine, as it is its precursor. At the same dose as arginine, it is more effective in increasing its amount in the body than arginine alone.

Beta-Alanine - is essential for the production of carnosine and protein building blocks that help prevent the body's aging. The compound supports the proper functioning and development of muscles. The amino acid is known to reduce muscle fatigue, which can help your muscles work better during training. This, in turn, promotes muscle growth. Beta-Alanine is especially helpful in intense short-term workouts such as weight lifting. Some people taking beta-alanine may notice a slight tingling sensation known as paraesthesia. The tingling sensation occurs because beta-alanine dilates the blood vessels, allowing more oxygen and blood to be delivered to the muscles.

Creatine Monohydrate - creatine monohydrate enables the storage and transport of phosphate groups necessary for the production of high-energy compounds, including adenosine-5'-triphosphate (ATP), ensuring the supply of energy to working and regenerating muscles. Supports the accumulation of glycogen. It increases the storage of water, the presence of which is required for the course of numerous biochemical reactions. It has antioxidant properties that reduce oxidative stress caused by excessive training intensity.

L-Arginine Alphaketoglutarate AKG - participates in the formation of nitric oxide and thus has the ability to expand blood vessels, allowing for better blood supply to muscles and soft tissues. It indirectly participates in the synthesis of cGMP, which, along with ATP, is involved in the process of muscle contraction and has an anabolic effect. It affects the secretion of growth hormone, supports the liver regeneration process, and is an important precursor for creatine. Unfortunately, the traditional form of Arginine breaks down very easily in the stomach and thus a small amount of it reaches its destination. 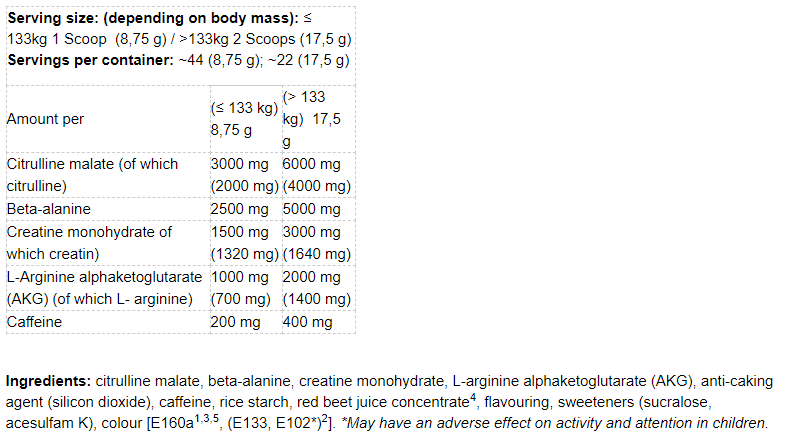