ANS Performance Rave is a new supplement with nootropic effects that is great for improving cognitive functions. An advanced nootropic designed for athletes, it is perfect for pre-training to get the best conditions to increase sports performance. It can also be used during intense mental effort, naturally increasing memory and concentration, as well as reducing stress.

RAVE is a powerful energy booster that prevents fatigue and affects a good mood. High quality of RAVE ingredients and compounds, among others: patented MagicLion and QiForce formulas. An effective nootropic perfectly increases mental performance and endurance, which translates into better training results and efficiency during work or study.

Taurine - this amino acid increases the endurance of the body and counteracts the symptoms of fatigue, and also improves our concentration. Taurine enables faster and more effective post-workout regeneration. Another important feature of this amino acid is that it reduces the negative effects of stress while we are on a reduction and following a low-carbohydrate diet. Taurine is also anti-catabolic and supports the transport of creatine.

Acetyl L-Carnitine - plays a very important role in the production of metabolic energy obtained from both fatty acids and other substrates such as ketone bodies, pyruvates or amino acids. Acetyl L-carnitine by providing the body with additional acetyl residues has a positive effect on the functioning of the nervous system, increases the level of the neurotransmitter acetylcholine. It actively participates in fat changes in our body. Importantly, it increases the share of fats in the energy processes of the body, thus saving other substrates such as glycogen or amino acids.

N Acetyl L Tyrosine - is an acetylated derivative of the L-tyrosine amino acid. Ordinary L-tyrosine is less stable and also less soluble in water, which can lead to reduced bioavailability. Acetylation increases the solubility and stability of some amino acids. N-acetyl-L-tyrosine supports the functioning of the brain by supporting the synthesis of norepinephrine catecholamines and dopamine (neurotransmitters).

Choline Bitartrate - choline bitartrate. Choline is a substance necessary for the proper functioning and construction of every cell in our body. It occurs in the body in compounds called phospholipids, the best known of them and the most abundant of them is lecithin. Phospholipids have many functions in our body, build cell membranes and act as transmitters in the nervous system (most likely they are involved in "creating" memory). An important function of choline is its participation in the transport and metabolism of cholesterol and other fats - it reduces their deposition in the vascular wall and gallbladder, and also affects the work of the liver (also reducing fat deposition) and kidneys (regulates the amount of urine excreted).

MagicLion - lion's mane extract. It has been used as a natural nootropic for centuries. Especially widespread in China, where it was used to increase cognitive functions, improve mood and alleviate symptoms of memory loss. Lion's Mane increases the production of nerve growth factor. The peptide promotes the growth of brain tissues, including dendrites.

Huperzia Serrata - is one of the most desirable substances from the group of agents providing the so-called brain cheering. It allows us to achieve maximum concentration, focus and isolate our attention in almost every situation. It is perfect for people with very demanding mental work as well as students or high school graduates. Unlike many other stimulants that affect our mind, its effect does not weaken over time and we can benefit from hupercine supplementation for a very long time. Its natural source is Huperzia Serrata, and it is also used to alleviate the symptoms of Alzheimer's disease. It is also responsible for increasing the amount of bioavailable acetylcholine which is necessary in the process of restoring memory.

L-Theanine - is a non-protein amino acid found naturally in green tea leaves - camellia. It has psychoactive properties because it easily crosses the blood-brain barrier. It stabilizes the mood, calms down, reduces symptoms of stress and anxiety. Also used as a nootropic agent - improving cognitive functions, work efficiency and learning efficiency. Researchers have proven the effectiveness of Theanine in increasing concentration, alertness and productivity, and the effects are already visible within the first hour after administration.

QiForce Astragalus Root Extract - a patented formula of the trandanek plant in a highly digestible form. It is an annual plant from the perennial group. The presence of polysaccharides contained in the plant stimulates the immune system and strengthens the body. It supports the acceleration of cellular metabolism, which prolongs the effort and improves energy efficiency, and supports the synthesis of proteins in the liver.

Nelumbo Nucifera Extract - plant extract used before training improves concentration and adds energy. Much scientific evidence confirms the action of higenamine as a powerful fat burner. This substance is also a bronchodilator and causes the bronchi and bronchioles to dilate, reduce airway resistance and increase airflow to the lungs. 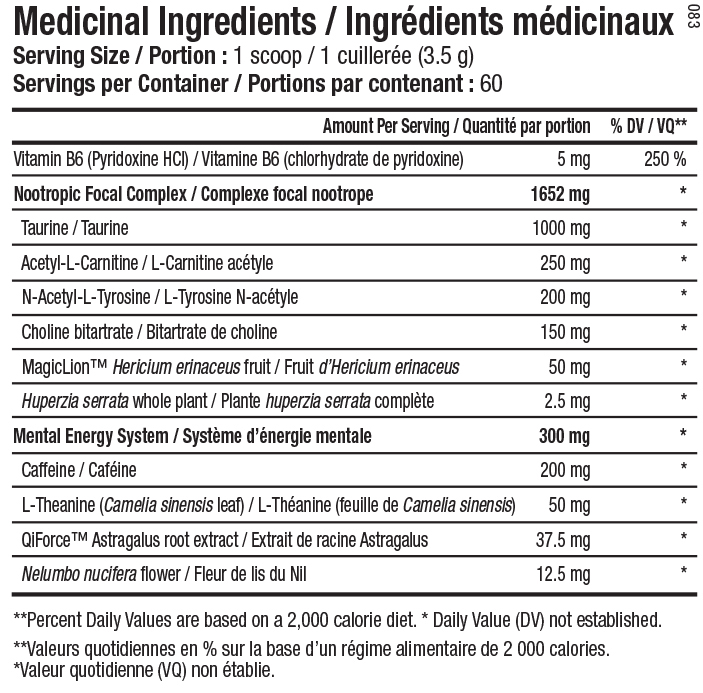