The NITRAFLEX® + C pre-training formula allows athletes to increase training energy, intensity, promote vascularization during training and provide long-term support for testosterone production. The new formula of Nitraflex with the addition of creatine promotes muscle strength and endurance. Nitrosigine® inhibits the enzyme responsible for the breakdown of arginine. In addition to vasodilation and performance benefits, pre-workout increases mental concentration, thanks to which it has a wide range of effects.

L-Citrulline - participates in the synthesis of nitric oxide (NO) and phosphocreatine as well as oxygen metabolism of glucose, thus increasing the uptake of oxygen, glucose, amino acids and creatine and energy production by muscle cells. It reduces the concentration of lactic acid and ammonia in the muscles, allowing the body to recover energy faster by increasing the level of creatine phosphate and re-synthesizing ATP. Citrulline malate is a much more effective form than high doses of arginine, as it is its precursor. At the same dose as arginine, it is more effective in increasing its amount in the body than arginine alone.

Nitrosigine - is a patented arginine and silicon complex that increases muscle performance. The substance significantly increases the production of nitric oxide, intensifying the feeling of a muscle pump. An advanced component of pre-workout supplements that increases blood flow and energizes for exhausting workouts.

Trans Resveratrol - contained in grapes acts as an antioxidant, scavenging free radicals that damage the body's healthy cells. It is a substance that reduces the absorption of LDL cholesterol in the walls of blood vessels, reducing the risk of heart disease and atherosclerosis. It inhibits the aggregation of platelets and prevents the formation of dangerous blood clots. It is perceived as a substance that has anti-obesity properties and may also have a beneficial effect in preventing diabetes. In addition, it has the ability to lower the level of blood pressure, which is an important factor in the prevention of civilization diseases.

Pterostilbene - an organic chemical compound, a derivative of resveratol. It is a methylated stilbene molecule with a structural similarity to resveratrol, the only difference being the two methoxy groups on the pterostilbene molecule which replace the hydroxyl groups in the resveratrol molecule. While most of these effects are comparable, pterostilbene appears to be much better absorbed orally and may be a more potent antioxidant and anti-cancer molecule. The compound protects against oxidative stress, has a neuro- and cardio-protective effect, has a positive effect on memory and concentration, and also has anti-cancer properties. Pterostilbene has many valuable properties and it is probably one of the most underappreciated compounds in medicine.

L-Tyrosine - dramatically enhances the effect of the supplement when it comes to the secretion of adrenaline! With this combination of ingredients, you will maximize your intensity and energy and experience better focus and mental clarity.

DMAE - an intermediate in endogenous choline synthesis structurally similar to it. It is found in small amounts in the brain. It is a more effective precursor of acetylcholine than choline itself, because when delivered from the outside, it more efficiently crosses the blood-brain barrier. Belongs to nootropic substances and drugs that stimulate the central nervous system (CNS), but its stimulating properties are quite mild. It increases the synthesis of acetylcholine, improving neuronal transmission in the cholinergic system.

Rauwolfia Vomitoria - has antioxidant, anti-inflammatory, analgesic properties, supports the carbohydrate and insulin metabolism, prevents cancer and improves mental condition. The high standardization of rauwolscine extract, also known as alpha yohimbine or isoohimbine, focuses the product's action on the nervous system and the loss of unnecessary body weight. By interfering with the work of the cholinergic system, it increases the concentration of adrenaline, stimulating the system to function and intensifying the lipolysis process. By intensifying the oxidation of fatty acids in the mitochondria. It promotes the burning of previously accumulated fat in the areas of the body rich in α2-adrenergic receptors, mainly in the lower abdomen and on the hips.

Boron Citrate - an extremely valuable element whose deficiencies can lead to degenerative joint diseases and prostate cancer. Boron has a positive effect on the concentration of vitamin D2, magnesium, calcium and copper in the body. It has a beneficial effect on motor coordination, mental performance and long and short-term memory. It also increases the activity of testosterone, which is why it is so important for people who exercise, especially for those who want to build muscle mass even more effectively, without worrying about the condition of joints often exhausted by heavy training. 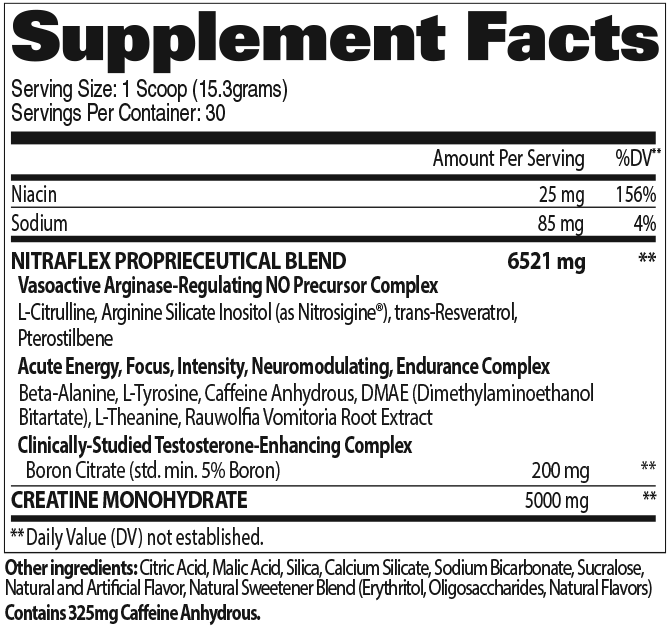