Keto Pump American Metabolix a new pre-workout for people on a keto diet. The most effective ingredients increase blood flow, training endurance and the natural production of ketones in the body.

goMCT 40% - medium chain fatty acid complex. An excellent and easily accessible source of energy, it is not stored in the form of adipose tissue, stimulates the secretion of growth hormone and insulin, has anabolic and anti-catabolic properties.

L-Citrulline - endogenous amino acid, occurs in large quantities in watermelon, takes part in the urea cycle, which is formed, among others with ornithine in the mitochondrion. The urea cycle is a metabolic cycle as a result of which the body gets rid of excess ammonia by turning it into urea, excreting from the body mainly in urine. It is a precursor of the amino acid arginine, indirectly involved in the production of nitric oxide (NO), and also stimulates the production of growth hormone (GH). The effect of using citrulline is to get a muscle pump.

Creatine Monohydrate - creatine monohydrate with a very good absorption rate. Creatine is a compound naturally produced by the body to provide muscle energy. Produced in the liver, pancreas and kidneys, it is transported through the bloodstream and into the body's muscles, where it is transformed into phosphocreatine. This high-energy metabolite is then used to regenerate muscle supplying adenosine triphosphate, the ultimate source of muscle energy.

Taurine - this amino acid increases the endurance of the body and counteracts the symptoms of fatigue, and also improves our concentration. Taurine enables faster and more effective post-workout regeneration. Another important feature of this amino acid is that it reduces the negative effects of stress while we're on a reduction and follow a low carbohydrate diet. Taurine also works anti-catabolic and supports the transport of creatine.

Acetyl-L-Carnitine HCL-plays a very important role in the production of metabolic energy obtained from both fatty acids and other substrates such as ketone bodies, pyruvates or amino acids. Acetyl L-carnitine by providing the body with additional acetyl residues, positively affects the functioning of the nervous system, increases the level of the neurotransmitter which is acetylcholine. Has an active part in fat metabolism in our body. Importantly, it enhances the share of fats in the body's energy processes, thus saving other substrates such as glycogen or amino acids.

N-Acetyl-LTyrosine-acetylated derivative of the L-tyrosine amino acid. Plain L-tyrosine is less stable and also less soluble in water, which can lead to reduced bioavailability. Acetylation increases the solubility and stability of some amino acids. N-acetyl-L-tyrosine supports brain function by supporting the synthesis of norepinephrine and dopamine (neurotransmitters) catecholamines.

L-Norvaline - an organic chemical compound from the group of branched chain amino acids belonging to non-protein amino acids. Norwalin is an arginase inhibitor, thus increasing the concentration of arginine. The biologically active enantiomer is L-norvaline. Norwaline is used to regenerate muscle tissue after exercise. Its natural origin is nuts, meat and cereals. It intensifies the anabolic and anti-catabolic effects of arginine, affecting the increase of exercise capacity (strength and endurance) and causes more effective blood supply and nutrition of muscle tissue. Norwalin supports the delivery of nutrients and vitamins to the muscles, which enhances and accelerates muscle building.

Caffeine Anhydrous - has a thermogenic effect and suppresses appetite, thanks to increased production of adrenaline and noradrenaline. It has been proven to increase the formation of such neurotransmitters in the central nervous system as dopamine, acetylcholine or even serotonin, which has a stimulating effect and increases cognitive function. The overall effect of caffeine on the body allows you to maintain the effectiveness of training and maintain a positive mood, despite the calorie deficit.

L-Dopa contains a key precursor for the most important neurotransmitter necessary for the proper functioning of our mind, as well as having the widest action confirmed by scientific research. L-dopa is formed due to the action of tyrosine hydroxylase, so it is a completely natural amino acid. In addition to a significant increase in dopamine, L-dopa is also used in medicine where its properties that increase memory and concentration, as well as improve sexual function are particularly valued. It is also important for optimal secretion of testosterone and growth hormone, which play an important role especially in physically active people.

Dicaffeine Malate - stimulates the central nervous system and vegetative centers: respiratory, vasomotor and vagus nerve. It also has an excellent thermogenic effect, converting calories to heat, significantly increasing the metabolic rate. It evenly stimulates the cerebral cortex, which means increasing thinking efficiency and preventing fatigue. It reduces the risk of liver and colorectal cancer, and also stimulates the release of fatty acids into the bloodstream, making it one of the ingredients that accelerate slimming.

Cognizin- Cognizine® is a source of choline, which after conversion into acetylcholine in the body provides a huge amount of benefits. There are many studies showing that it is effective in increasing both short-term and long-term memory. Hordenine HCL- works primarily by releasing and protecting norepinephrine, which translates into increased metabolism, energy supply, and a decrease in appetite. Users use Hordenine for three main effects: fat loss, appetite control and energy boost. It is used by pre-workout bodybuilders for synergistic effects combined with PEA (phenylethylamine).

Huperzia serrata- is one of the most desirable substances from the group of agents providing so-called brain doping. It allows you to achieve maximum concentration, focus and isolate our attention in almost every situation. Perfect for people with very demanding intellectual work as well as students or high school graduates. Unlike many other stimulants acting on our mind, its effect does not weaken over time and we can enjoy the benefits of hupercin supplementation for a very long time. The natural source of its occurrence is the forkbeard Huperzia Serrata, and it is also used in alleviating the symptoms of Alzheimer's disease. It is also responsible for increasing the amount of bioavailable acetylcholine which is necessary in the process of restoring memory. 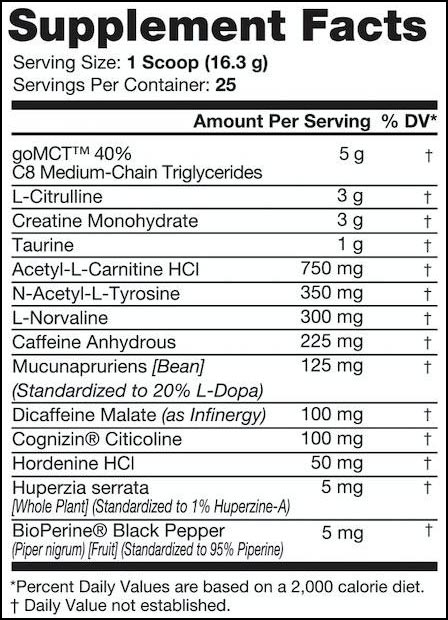