Gaspari Nutrition Aminolast high-quality BCAA amino acids with a strong regenerating effect. The supplement provides the most important amino acids and electrolytes to increase muscle hydration and prevent painful muscle spasms. The preparation is rich in calcium, magnesium and sodium. Amino acids in the form of the Aminolast Matrix formula, which contains six ingredients that accelerate muscle regeneration and reduce the level of fatigue.

Amino acids contained in Aminolast are in the form of di-peptides and tri-peptides. Leucine, which is one of the most important muscle-building amino acids, is found in the patented form of PepForm. Leucine is a priority when it comes to amino acid supplementation for strength athletes. It effectively enhances the synthesis of muscle proteins, which is crucial for muscle growth and repair.

Calci-K - is an easily digestible form of calcium. Calcium is a basic mineral component that contributes to the maintenance of the body's electrolyte balance necessary for its proper functioning. It is an important component of bone tissue and is essential for its proper development, as well as for the efficient functioning of nerves, muscles and heart.

Magnesium Albion - magnesium in the form of Albion determines the course of many processes in the body. It creates bones, participates in the proper metabolism of fats, proteins and carbohydrates, relaxes the muscles, preventing them from painful cramps, and is also involved in the production of energy. Especially for athletes, it is an essential mineral, it actively participates in the work of muscles, reducing conductivity and excitability.

Sodium - an important component of electrolytes, should be supplied especially to people who train intensively. It increases the absorption of carbohydrates and reduces the feeling of muscle fatigue.

L-Leucine - affects the synthesis of skeletal muscles in several ways: it increases the secretion of insulin, a powerful anabolic present in our body, affects the activity of the S6 protein kinase, accelerates the phosphorylation of the eIf4E binding protein and affects the degree of connection between proteins (eIF) 4E and eIF4G. All this, despite the complicated sound and naming, boils down to a very simple theorem - Leucine increases the degree and speed of protein utilization to build muscles.

Taurine - is an essential ingredient in energy drinks, helping the body to draw energy from one of your favorite energy sources. Taurine in the body plays many functions: from supporting brain function, through the transport of creatine to the muscles, to supporting heart contractions. In the 1970s, when it was discovered that taurine inhibits catabolic processes in the muscles, and at the same time has an anabolic effect, it became extremely popular among athletes.

L-Isoleucine - the supply of large amounts of Leucine reduces the level of the other two amino acids: Isoleucine and Valine, which is why it is so important to use all three compounds together. In addition, Isoleucine is classified as glucogenic amino acids, i.e. those that the body can easily and quickly transform into the energy necessary for its functioning. This means that we will not only be able to train longer and more intensively, but also recover faster.

L-Valine - its presence in this combination is due not only to the aforementioned need to administer all three BCAA amino acids together, but also to reducing central nervous system fatigue. In addition, as in the case of the other two amino acids, it is easily converted into energy used by working muscles and thus allows you to save the glycogen stores accumulated in the liver.

L-Ornithine L-Aspartate - takes part in the ammonia detoxification process and affects the regeneration of liver cells. L-aspartic acid is involved in energy transformations, the synthesis of purines, urea, and increases the synthesis of nitric oxide. L-ornithine as an endogenous amino acid mediates the metabolic cycle of urea synthesis from ammonia. It synthesizes polyamines to regenerate the liver.

1 scoop before training, between meals, during training and post-training depending on your needs. 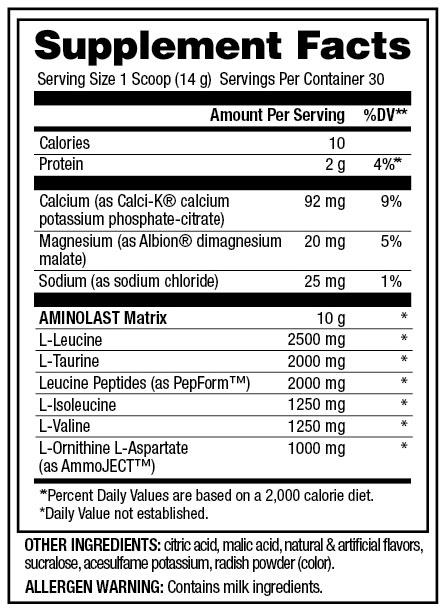