Boost your training effects with the Unstoppable pre-workout from the USA!

Dedicated Unstoppable Pre-Workout US version of the well-known pre-workout. The supplement is a low-caffeine alternative. The pre-workout supplement is rich in a set of stimulants and adaptogens, providing comprehensive support during exhausting training sessions.

An impressive combination of ingredients that preserve the muscle pump. Betaine Nitrate (NO3T) is extremely effective in increasing your pre-workout pump. Increased production of nitric oxide in the body leads to a substantial muscle pump. Glycerol Monostearate affects the proper hydration of the muscle tissue, achieving the effect of full muscles. Agmatine sulfate regulates the level of nitric oxide and increases the pain threshold. Theobromine enhances vasodilation, promotes blood flow to the muscles by nourishing them properly and accelerating the delivery of Unstoppable active ingredients to the muscles.

The pre-workout improves your well-being, increases fat burning, strengthens endurance, adds energy, promotes endurance and allows you to obtain a muscle pump. The US version with the addition of high-dose alpha yohimbine allows you to keep caffeine levels low while enjoying all the stimulating effects. A solid dose of active ingredients allows for greater efficiency, supports the production of creatine in the body and reduces muscle soreness.

Due to the content of yohimbine, we recommend using it away from carbohydrate meals in order to obtain maximum effects of supplementation.

Ingredients of the pre-training booster Unstoppable:

L-Citrulline - participates in the synthesis of nitric oxide (NO) and phosphocreatine as well as oxygen metabolism of glucose, thus increasing the uptake of oxygen, glucose, amino acids and creatine and energy production by muscle cells. It reduces the concentration of lactic acid and ammonia in the muscles, allowing the body to recover energy faster by increasing the level of creatine phosphate and re-synthesizing ATP.

Betaine Nitrate - it helps to increase the body's efficiency and improve the work of the nervous system. An additional advantage associated with the use of betaine is better cell hydration. Like glycine, betaine draws water with it when it is absorbed into the cell. This results in better hydration of the body and an increase in the feeling of a muscle pump during training. The main intracellular transporter of trimethylglycine in the body is the BGT-1 transporter. In addition, betaine stimulates the production of the vasodilator - nitric oxide. Overall, the ingredient provides better blood supply to the muscles and their nutrition.

Glycerol Monostearate - glycerol hydrates muscle cells, which is of great importance not only for their size but also for muscle fiber contractions. Glycerol monostearate also increases blood volume and improves blood supply to working muscles. The most important benefit of this substance for bodybuilders is the ability to bind and retain water. When glycerin reaches the muscles, it binds fluids, which makes the muscle more swollen and increases its efficiency. The mechanism of action of glycerol is similar to that of creatine binding water. Along with water, many substances with anabolic effects and blood borne hormones reach the muscles. Through an exceptionally high dose of glycerol, glycerol allows you to quickly obtain a muscle pump.

Agmatine Sulfate - effectively increasing the secretion of nitric oxide in the human body, which translates into a strong muscle pump feeling during training. The expansion of blood vessels supports the supply of blood and nutrients to the working muscles, which significantly accelerates the regeneration process and building new muscle fibers. In studies with the use of agmatine, it has been shown that its action can support protein synthesis even twice, which, in addition to the action of agmatine itself, is also associated with the effect of increasing the supply of nutrients to muscle tissues.

Theacrine - is an alkaloid that is structurally related to caffeine and also activates similar signaling pathways. Under natural conditions, theacrine is most likely synthesized from caffeine and then stored. It is believed to be the most concentrated in Chinese tea Camallia sinensis, where it occurs alongside caffeine and theobromine. This substance effectively increases the level of energy in the body, and its action is very similar to caffeine, with the difference that it works much longer, shows a slower increase in tolerance and does not cause unpleasant effects. In addition, the substance does not increase blood pressure.

Rhodiola Rosea Extract - a plant that belongs to the group of adaptogens, plants that help the body adapt to high mental and physical stress. It is also known as arctic root or golden root. It contains over 140 active ingredients, the two most important of which are rosavin and salidroside. Rosavins and salidroside increase the level of serotonin and dopamine in the brain. Additionally, they lower the level of adrenal hormones, such as glucocorticosteroids and cortisol. These hormones are produced by the glands under stress. Both ingredients stimulate the synthesis of endorphins called the happiness hormone. Rosavins perfectly improve mood, increase concentration, improve memory and promote cognitive functions. The main action of Rhodiola is to relieve fatigue, improve concentration and improve mood. All this translates into better results both at the gym, as well as at work or school.

Hordenine HCL - is a natural phenylethylamine compound that is present in small amounts in various plants. This supplement works primarily by releasing and protecting norepinephrine, which translates into an increase in metabolism, energy supply, and a decrease in appetite. Users use Hordenine for three main effects: fat loss, appetite control, and energy boost.

Infinergy - is a buffered version of caffeine that produces the same stimulating effect of caffeine, while protecting the stomach from the disorders that can occur with anhydrous caffeine. In particular, malic acid works to improve the function of the gastrointestinal tract and stomach, and at the same time plays an important role in the Krebs cycle. Infinergy helps reduce fatigue, improve concentration, increase physical fitness and accelerate the thermogenesis process. In particular, it reduces sedation and relaxation by inhibiting the production of adenosine, a chemical related to sleep. It causes an increase in wakefulness, concentration, better body coordination and an increase in efficiency during training.

Theobromine - by inhibiting cAMP-degrading phosphodiesterase, it increases its concentration, thus maintaining clarity of thinking and promoting the lipolysis process, thanks to which it increases the pool of readily available energy substrate resources. Theobromine also affects the relaxation of blood vessels and lowering blood pressure.

Synephrine HCL - is one of the most popular ingredients of elite fat burners and is largely responsible for their operation. There are many thermogenic products on the market that effectively reduce body fat, and synephrine in its various forms is the substance that connects them all. Its effect on fat loss has been proven many years ago, and the popularity of this compound is constantly increasing, mainly due to its high effectiveness and relatively low risk of effects such as headaches or poor well-being.

Huperzine A - one of the most amazing alkaloids used to increase the ability to remember. Hupercine A is one of the most desirable substances from the group of agents providing the so-called brain cheering. It allows us to achieve maximum concentration, focus and isolate our attention in almost every situation. It is perfect for people with very demanding mental work as well as students or high school graduates. Unlike many other stimulants that affect our mind, its effect does not weaken over time and we can benefit from hupercine supplementation for a very long time. It is on the market both solo and in the form of an important part of many complex supplements aimed at increasing mental abilities or improving memory.

Alpha Yohimbine - Rauwolfia vomitoria root extract, plants from the Apocynaceae family, a shrub naturally growing in tropical regions of Africa, brought to other continents, including Asia. It has antioxidant, anti-inflammatory, analgesic properties, supports the carbohydrate and insulin metabolism, prevents cancerous processes and improves mental condition. The high standardization of the rauwolscine extract, also known as alpha yohimbine or isoohimbine, focuses the product's action on the nervous system and the loss of unnecessary body weight. By interfering with the work of the cholinergic system, it increases the concentration of adrenaline, stimulating the system to function and intensifying the lipolysis process. By reducing the activity of α2-adrenergic receptors, it increases the amount of adenylate cyclase and cyclic adenosine-3 ′, 5′-monophosphate (cAMP), enhancing fatty acid oxidation in mitochondria. It promotes the burning of previously accumulated fat in the areas of the body rich in α2-adrenergic receptors, mainly in the lower abdomen and on the hips.

Vitamin C - is one of the most important water-soluble vitamins. It is the basis of the skin, bones, cartilage, tendons, blood vessels and valves in the heart. Ascorbic acid is a strong antioxidant, it accelerates the decomposition of harmful substances resulting from intense training, it also effectively protects against infections. Another advantage of this vitamin is the improvement of iron absorption and the improvement of oxygen transport to cells, which translates into improved muscle condition. Effective absorption of oxygen extends the working time of the muscles and delays the stage of anaerobic respiration of the muscles, which causes the formation of soreness. 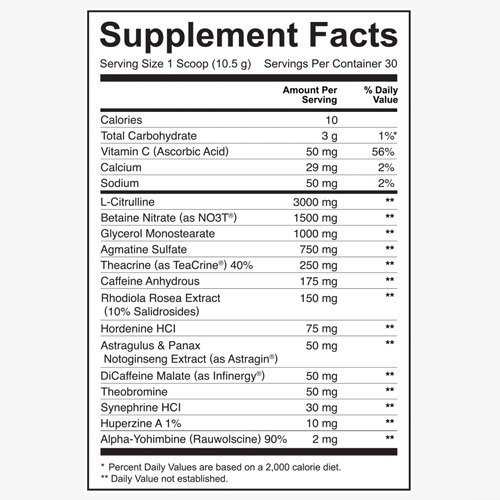