Black Label Tranquil is a new supplement with relaxing properties. The effective formula based on natural ingredients perfectly reduces anxiety, has a calming effect and reduces the level of cortisol in the body. The best ingredients in a high dose shorten the time to fall asleep and allow you to relax in peace without waking up at night.

Thanks to the use of the best ingredients, including 5 htp and GABA, it affects directly the neurotransmitters in the brain, introduces deep sleep, accelerating full regeneration. Tranquil supplement effectively improves the body's performance, reduces stress, has regenerative properties and affects cognitive functions. The formula rich in adaptogens improves cognitive functions, increases mental performance, promotes concentration and facilitates remembering.

Ashwagandha - high-quality Ashwagandha root extract is an adaptogen. It has a positive effect on the body's energy management. It contributes to the protection of tissues against damage - acts as an antioxidant and supports the building of muscle tissue. It helps in maintaining vitality, well-being and emotional balance as well as in states of reduced concentration, exhaustion, fatigue and nervous tension. In addition, it supports the processes of learning, remembering and maintaining mental fitness in good condition.

L-Theanine - has many more health benefits, including therapeutic ones. One of the studies confirmed its use in hypertension - it effectively reduced blood pressure in proportion to the dose used. Other studies suggest that it enhances the effects of chemotherapy drugs against cancer cells, and others that supplementation with Teanine alleviates the mental, physical and social symptoms associated with PMS.

Rhodiola Rosea - a plant belonging to the group of adaptogens, plants that help the body adapt to high mental and physical stress. It is also known as arctic root or golden root. It contains over 140 active ingredients, the two most important of which are rosavin and salidroside. Rosavins and salidroside increase the level of serotonin and dopamine in the brain. Additionally, they lower the level of adrenal hormones, such as glucocorticosteroids and cortisol. These hormones are produced by the glands under stress. Both ingredients stimulate the synthesis of endorphins called the happiness hormone. Rosavins perfectly improve mood, increase concentration, improve memory and promote cognitive functions.

5-htp - increases the level of serotonin, evens out mood swings and helps with depression. In addition, it shortens the necessary sleep time (extending the REM phase), lowers appetite, thus helping to lose weight, lowers pain tolerance and is a natural remedy against migraine. By increasing serotonin levels, depression is relieved in a natural way.

Kava - the so-called cavalactones and other ingredients found in its thick and thick roots. The content of kavalactones in a given kava ranges from 3% to 20%. Kava kava affects the limbic system. It is a group of interconnected deep brain structures, the same in all mammals, and influences emotions, behavior, and various autonomic functions. This pepper causes a feeling of happiness, carefree and contentment.

Valerian Root - otherwise known as valerian root, is one of the most popular ways to deal with stress and high nervous tension. It allows you to quickly calm down, reduces anxiety and high nervousness. Additionally, it helps you fall asleep and sleep well throughout the night. Valerian owes its action to numerous active ingredients, such as valeranone, valerenal, esters of isovaleric acid or flavonoids. Some of these ingredients allow you to activate GABA receptors, thanks to which the brain quickly cuts itself off from unnecessary and stressful stimuli, providing immediate relaxation.

GABA - γ-aminobutyric acid occurs as an organic chemical compound from the group of amino acids, which acts as the main inhibitory neurotransmitter throughout the nervous system. It affects not only the building of muscles, but also helps to fall asleep, relieves anxiety symptoms, relaxes and calms down. GABA affects the nervous system by increasing the excitability threshold of nerve cells and thus reducing their sensitivity to stimuli. GABA causes relaxation, calming down, and - due to the increased release of endorphins - overall improved well-being and a better mood. 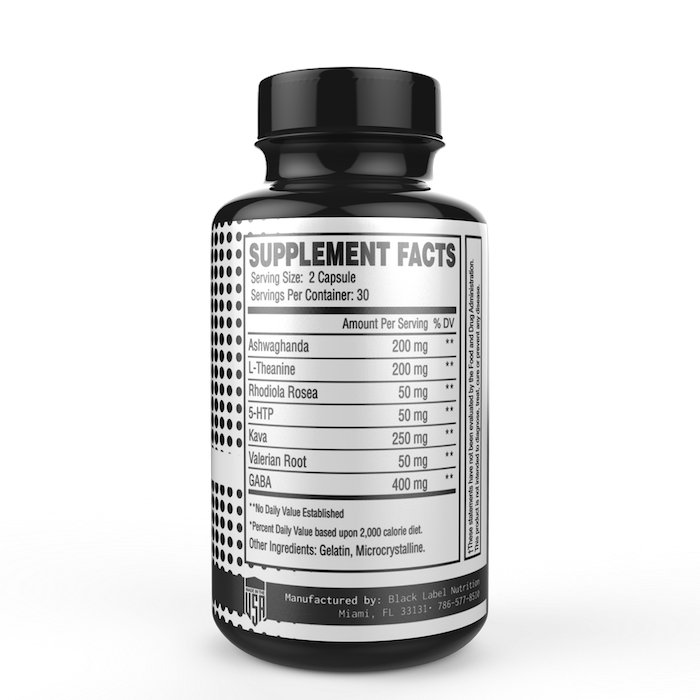