The combination of ingredients with a stimulating effect (Synephrine, Yohimbine Hydrochloride, Yohimbe bark, DMHA, Caffeine), nootropic (Mucuna Pruriens, Alpha GPC, Sulbutiamine) ensures fast fat loss, even when the body is at rest. The set of the most effective ingredients promotes fat loss from the most fat-burning body parts and supports the proper functioning of the thyroid (metabolite 3.5 Diiodo L Thyronine). B vitamins help the body convert carbohydrates into glucose to create energy for the proper functioning of the body.

2-Aminoisoheptane DMHA - a strong stimulant with DMAA-like effect. It affects the central nervous system by increasing the level of dopamine and noradrenaline. Intensive workouts combined with the use of DMHA give phenomenal results in the form of appetite suppression, reduction of body fat, increase of memory and creativity as well as reduction of anxiety and anti-fatigue. The preparation is an interesting alternative for people who rave about the effects of DMAA, but show poor tolerance to this stimulant. The chemical structure of DMHA and DMAA shows close similarity, therefore their action is similar.

3.5 Diiodo L Thyronine - a thyroid hormone metabolite. Scientific studies show that the compound has the ability to increase the rate of fatty acid oxidation, which supports weight loss. This is due, inter alia, to the fact that 3,5-diiodothyronine increases the use of oxygen in the body. Available scientific literature preliminarily confirms that the use of 3,5-diiodothyronine does not have side effects like the use of thyroid hormones.

Green Tea - owes its slimming properties to catechins, namely a substance called epigallocatechin gallate (EGCG). Catechins contained in green tea extract have a significant impact on fat reduction. They inhibit the absorption of fats from food and increase their consumption by the body. In addition, green tea increases the activity of some enzymes responsible for the digestive process, has a positive effect on liver metabolism, increases thermogenesis and accelerates fat oxidation.

B-Phenylethylamine - an organic chemical compound found in natural form (e.g. in chocolate) and synthesized in the human body from the amino acid I-phenylalanine. As a neurotransmitter and neuromodulator, it affects the nervous system, increases the amount of dopamine and noradrenaline.

Alpha GPC - a water-soluble choline derivative that is converted into acetylcholine in the body, one of the most important neurotransmitters. Scientific studies have shown that Alpha GPC supplementation realistically increases acetylcholine levels in the brain, which translates into significantly better memory and concentration, also in people at a young age. Other clinical studies have shown that supplementation with L-alpha-glycerylporsorylcholine also supports brain function in people suffering from Alzheimer's disease and dementia, while delaying aging.

Cayenne Pepper - the main active ingredient of Capsicum frutescens is capsaicin, which is famous for its sharp taste. This organic chemical compound has analgesic, antioxidant, antibacterial, antihypertensive effect and, by affecting thermoregulation and fat metabolism, helps to reduce body fat. The latest reports also speak of its gastroprotective and anti-cancer properties.

Yohimbe Extract - a substance that is helpful in fighting the so-called refractory adipose tissue, mainly located in the chest and lower waist area in men, as well as hips, buttocks and thighs in women. Yohimbine works by blocking α2 receptors, which clearly facilitates slimming and is helpful in carving slimming-resistant body parts. It is worth remembering that the effect of yohimbine effectively reduces insulin. So taking this compound around carbohydrate meals is pointless. Yohimbine is especially effective when used on an empty stomach, before exercise.

Citrus Aurantium Extract - bitter orange is not an edible fruit but it is an excellent source of vitamin C, the amount of which in the extract can reach up to 42%. Bitter oranges are much richer not only in vitamin C but also in antioxidants, e.g. bioflavonoids such as hesperidin, compared to regular oranges. In addition to the high content of highly absorbable vitamin C, bitter orange is primarily known for its compactness in the synephrine plant, which is a natural substitute for ephedrine. Synephrine has a similar structure to ephedrine. It is obtained naturally from unripe citrus fruits, e.g. Citrus uranium L., Citrus aurantium L. This substance is a natural substitute for ephedrine.

Sulbutiamine - a derivative of the commonly known vitamin B1 (thiamine) with notropic effects. It is an organic chemical compound that penetrates from the blood into the nervous system in an amazingly effective way. It is of great importance for the normalization of processes occurring in the nervous system - it tolerates anxiety attacks, improves the quality of contact with the environment, reduces such feelings as shame, shyness, lack of self-esteem or fear of other people. As a medicine, it is commonly used to treat asthenia or sexual disorders that have a source in the psyche.

Vitamin B6 - is a coenzyme of many enzymatic transformations in the body, among others amino acid transamination and decarboxylation. Particularly important is its participation in the transformation of tryptophan, which produces serotonin and nicotinic acid. It is necessary in the process of phosphorylation, affects glycogenesis and glycogenolysis in muscles, plays an important role in immune and hematopoietic processes. It reduces the secretion of prolactin, which has a negative effect on male libido.

Hordenine HCL - an amine formed from L-Tyrosine, has ephedrine-like effects, contributes to the intensification of thermogenic processes, can also increase dopamine production. Thanks to the synergistic combination with caffeine or synephrine, it significantly extends the stimulant effect without the unwanted effect of a sudden "reunion" and a decrease in energy levels. At the same time, it prolongs the time of increased metabolic activity.

N-Caffeoyldopamine - the ingredient belongs to phytoalkaloids, obtained from cocoa beans. The substance has lipolysis increasing effects. It affects the agonism of beta-2-adrenergic receptors, which is why it has similar effects to sulbutamol, increasing the concentration of cAMP (cyclic adenosine-3 ', 5'-monophosphate). By stimulating fat cells, releasing glycerol and fatty acids they contain, they allow the body to increase energy. It easily allows you to draw energy from adipocytes. In addition, it improves mood.

Higenamine HCL - an alkaloid obtained mainly from the seeds of Nelumbo Nucfera - Nelumbo Nelumbo, in small quantities it can also be found in coffee. It shows a synergistic effect to NMT causing the release of norepinephrine and adrenaline into the blood resulting in the expansion of the respiratory tract and thus increasing the body's efficiency. The compound acts as a stimulant, increasing energy and alertness. Higenamine reduces oxidative stress by protecting the body against free radicals.

Halostachine HCL - an ingredient accelerating the level of metabolic energy and fat burning! This ingredient has a strength exceeding pure ephedrine. It works on the same principle by stimulating beta 3 receptors. The effect is an impact of uninterrupted energy, stimulation, mental clarity, increased motivation, strength and endurance. Halostachine is more safe than ephedrine. It works selectively, which does not show such a high risk of pressure and pulse increase. The adrenaline and noradrenaline released for her cause works in a strictly defined direction - conversion into the energy of residual fats.

Dendrobium Nobile - a species of orchid family (Orchidaceae), occurs naturally in the mountainous areas of India, China. A distinctive feature of this plant is that it has long been used in traditional Chinese medicine as a medicinal plant under the name shihu. It is attributed to its toning properties, reducing fatigue, as well as anti-diabetic effects. In addition, the plant stimulates action, improves the body's efficiency and boosts metabolism.

Octopamine HCL - a natural substance derived from bitter orange fruit. It exhibits modulating adrenergic system. It stimulates beta-3 adrenergic receptors, which results in the breakdown of fat cells in the body. In sports supplementation, it is used in fat burners and pre-workout supplements due to its thermogenic and lipolytic properties. The substance also effectively suppresses appetite.

Capsicum Annum - a naturally occurring alkaloid found in peppers. Capsaicin helps to increase and maintain lipolysis (fat burning) in people prone to fat. Consumed with food, capsaicin may increase the total energy consumed and carbohydrate oxidation, and slow down lipid oxidation for a short period of time (up to two hours). Short-term consumption of capsaicin will cause a temporary thermogenic effect and will act as a carbohydrate blocker. Capsaicin use for a long time (over a month) can shift the body to the side, promoting the use of fat as an energy source and increasing fat burning.

Grape Seed Extract - grape seeds are rich in antioxidants, including phenolic acids, anthocyanins, flavonoids and oligomeric proanthocyanidin complexes (OPC). Due to the high content of antioxidants, GSE can help protect against oxidative stress, tissue damage and inflammation, and prevent disease. The resveratrol present in grape seed extract acts as an antioxidant, scavenging free radicals that damage healthy body cells. Is a substance that reduces the absorption of LDL cholesterol in the walls of blood vessels, reducing the risk of heart disease and atherosclerosis. It inhibits platelet aggregation and prevents the formation of dangerous blood clots. It is perceived as a substance that has anti-obesity properties and may also have beneficial effects in preventing diabetes. In addition, it has the ability to lower blood pressure, which is an important factor in the prevention of lifestyle diseases.

Hoodia Gordonii - is obtained from the Hoodia cactus found in South America. Studies have shown that this extract affects the suppression of hunger, which is useful during reduction diets. This substance is relatively expensive and quite difficult to access - for these reasons, Hoodia is not a common ingredient in fat burners.

Yohimbine HCL - yohimbine hydrochloride. Yohimbine is great for improving athletes' performance. Studies show that it can potentially increase energy expenditure, which is conducive to the body's exercise capacity. The use of yohimbine before physical activity or on an empty stomach increases the distribution of body fat. Daily yohimbine supplementation intensifies the lipolysis process especially in parts of the body resistant to fat burning in men - abdomen, lower back, in women - thighs and buttocks. 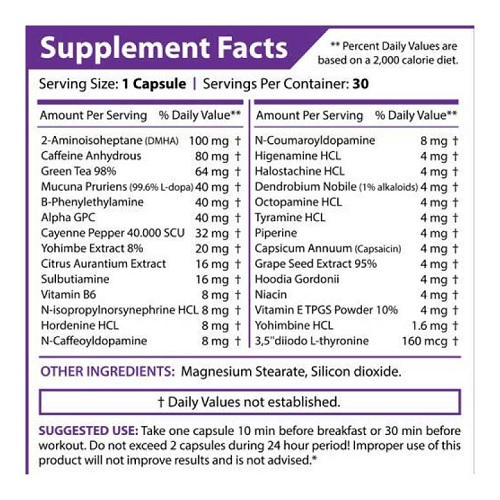