The premium formula contains proven ingredients, and in combination with training, SuperHuman Sleep promotes muscle building. The preparation contains effective combinations of six Matrixes that will help you sleep better, build muscle and reduce body fat. The supplement with versatile effects is recommended for men and women who want to support muscle growth and count on fat loss during sleep.

Magnesium Chelate - magnesium determines the course of many processes in the body. It creates bones, participates in the proper metabolism of fats, proteins and carbohydrates, relaxes the muscles, preventing them from painful cramps, and is also involved in the production of energy. Especially for athletes, it is an essential mineral, it actively participates in the work of muscles, reducing conductivity and excitability.

Zinc - is one of the most important minerals for your body because it is involved in many metabolic processes (including accelerating the body's protein synthesis). The most important activity of this mineral, however, is its influence on the appropriate level of testosterone, which, as you know, is very important for maximum and rapid gains.

L-Glutamine - actively participates in the processes of wound healing and microdamages. This effect in the preparation was additionally enhanced by a powerful dose of taurine, a sulfuric amino acid with antioxidant and anti-inflammatory properties. Scientific research suggests a protective effect of taurine against post-workout muscle damage, but also its ability to activate fat energy reserves, thus supporting fat burning. It demonstrates the ability to increase the volume of muscle fibers. It is present in the highest amount in free form, thanks to which it can quickly participate in the processes of protein biosynthesis and inhibiting the damage caused by enzymes that contribute to the breakdown of muscle fibers. belongs to the most effective anabolic hormones.

GABA - γ-aminobutyric acid occurs as an organic chemical compound from the group of amino acids, which acts as the main inhibitory neurotransmitter throughout the nervous system. It affects not only building muscles, but also helps to fall asleep, relieves anxiety symptoms, relaxes and calms down. GABA affects the nervous system, increasing the excitability threshold of nerve cells and thus limiting their sensitivity to stimuli. GABA causes relaxation, calming down, and - due to the increased release of endorphins - overall improved well-being and a better mood.

L-Dopa - contains a key precursor for the most important neurotransmitter necessary for the proper functioning of our mind, as well as having the broadest effect confirmed by scientific research. L-dopa is produced by the action of tyrosine hydroxylase, so it is a completely natural amino acid. In addition to a significant increase in dopamine, L-dopa is also used in medicine, where its properties that increase memory and concentration, as well as improve sexual functions are particularly valued. It is also important for the optimal secretion of testosterone and growth hormone, which play an important role especially in physically active people.

Chamomile Flower - chamomile extract is responsible for a pronounced anti-anxiety and relaxing effect. It can reduce the snoring effect, thanks to which it improves sleep comfort, and protects against severe sleep apnea. What's more, due to the high content of bioactive ingredients, chamomile also has anti-inflammatory properties. It also improves immunity (it works very well in the most common colds), and improves the functioning of the circulatory system.

Melatonin - an organic chemical compound - a tryptophan derivative that acts as a 'sleep hormone' in the human body. It is produced in the pineal gland, more specifically in special cells called pinealocytes. Melatonin is somewhat related to another important neurohormone, serotonin. In a few chemical reactions, serotonin turns into melatonin when needed (and under the right conditions). Melatonin can also be used in shift work - when you have to go to bed at unusual hours, or when 'hours are shifted' in the case of the Jet Lag phenomenon. Melatonin is a powerful antioxidant - it reduces oxidative stress and thus prevents cell death. It is extremely important for the Central Nervous System, where it is present in the highest amounts - it prevents damage to neurons and stops neurodegenerative diseases. The use of melatonin does not have any side effects.

KSM-66 Ashwagandha - high-quality Ashwagandha root extract obtained in a process consistent with the principles of 'Green chemistry'. As an adaptogen, it has a positive effect on the body's energy management. Contributes to the protection of tissues against damage - acts as an antioxidant and supports the building of muscle tissue. It helps in maintaining vitality, well-being and emotional balance as well as in states of reduced concentration, exhaustion, fatigue and nervous tension. In addition, it supports the processes of learning, remembering and maintaining mental fitness in good condition.

L-Theanine - has many more health benefits, including therapeutic ones. One of the studies confirmed its use in hypertension - it effectively lowered blood pressure in proportion to the dose used. Other studies suggest that it enhances the effects of chemotherapy drugs against cancer cells, and others that supplementation with Teanine alleviates the mental, physical and social symptoms associated with PMS.

Sodium - an important component of electrolytes, should be supplied in particular to people who train intensively. It increases the absorption of carbohydrates and reduces the feeling of muscle fatigue. 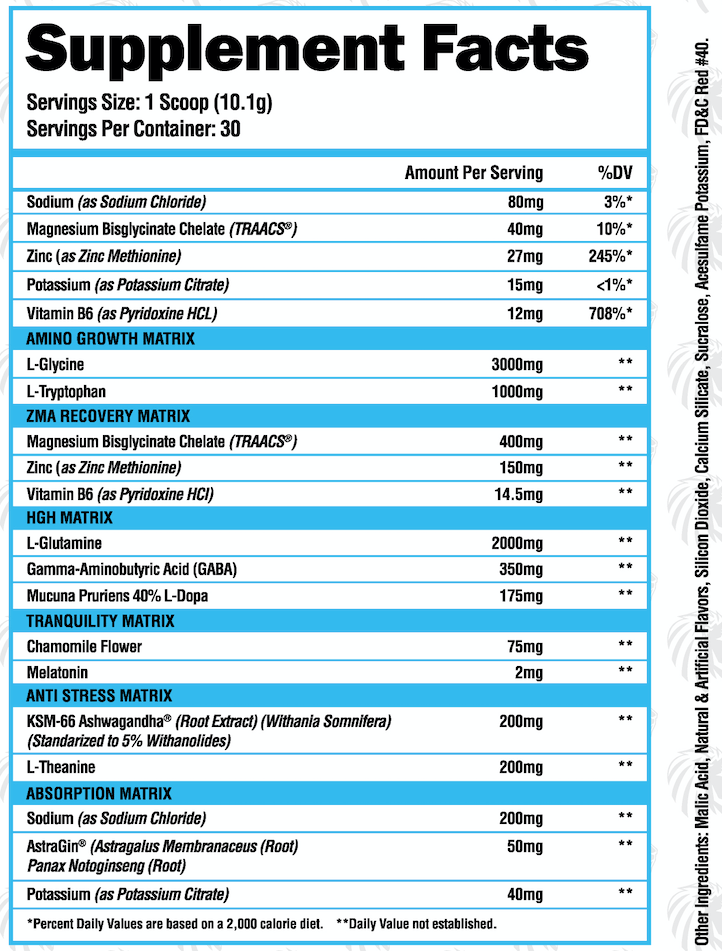