Alpha Lion StimTropic a new nootropic supplement with a nervous system stimulating effect. The product provides long-lasting energy for the whole day, increases focus and concentration, suppresses appetite. Based on a high dose of DMHA, TeaCrine and Dynamine, it increases aerobic capacity, improves mood and promotes cognitive function. The preparation is recommended for athletes performing intense workouts that need full focus and energy, as well as anyone who wants to improve their brain function, remember a large amount of information, as well as feel good during the day.

Theobromine - theobromine is a substance found primarily in cocoa beans, popular yerba mate, coffee or tea. Its main features include diuretic, hypotensive and thermogenic properties, especially in combination with caffeine and polyphenols. This substance stimulates the work of the heart and dilates blood vessels, thanks to which it has a presumed hypotensive effect (however, this has not yet been clearly confirmed by tests). Thanks to Theobromine, ECA XTREME also has a positive effect on muscle definition.

L-Theanine- is a non-protein amino acid found naturally in green tea leaves - camellia. Has psychoactive properties because it easily overcomes the blood-brain barrier. It stabilizes the mood, calms down, relieves the symptoms of stress and anxiety. Also used as a nootropic agent - improving cognitive functions, work efficiency and learning effectiveness. Researchers have proven theanine's effectiveness in increasing concentration, alertness and productivity, and the effects are already visible within the first hour after administration.

2-aminoisoheptane- is a stimulant that has other names, such as dmha or octodrine. DMHA works bronchodilator, which increases our aerobic capacity, in addition, it has decongestant activity (narrowing of blood vessels, causing an increase in the rate of oxygen flow), does not cause "stupidity" and sharpens the senses which could not always be experienced with dmaa.

Caffeine Anhydrous - has a thermogenic effect and suppresses appetite, thanks to increased production of adrenaline and noradrenaline. It has been proven to increase the formation of such neurotransmitters in the central nervous system as dopamine, acetylcholine or even serotonin, which exerts a stimulating effect and increases cognitive function. The overall effect of caffeine on the body allows you to maintain the effectiveness of training and a positive mood, despite the caloric deficit.

Dynamine- molecular structure is similar to axin (also known as TeaCrine®) and is believed to behave in a similar but more intense manner in the body. Like acryna, methylliberine clearly increases energy, mood and concentration by activating dopamine receptors and other key neurotransmitters, inhibiting adenosine receptors, all without increasing the pressure.

TheaCrine-is an alkaloid that structurally resembles caffeine and also activates similar signaling pathways. Under natural conditions, theacrine is most likely synthesized from caffeine and then stored. It is believed that this substance is in the highest concentration in Chinese tea Camallia sinensis, where it is found next to caffeine and theobromine. This substance effectively increases the level of energy in the body, and its action is very similar to caffeine with the difference that it works much longer, shows a slower increase in tolerance and does not cause unpleasant effects. In addition, the substance does not increase blood pressure.

AstraGin - a patent-protected blend of bark tragus extracts and false ginseng. It is used in supplementation because of its ability to increase the absorption of other active ingredients. In addition, it can also promote insulin sensitivity, favorably affecting carbohydrate metabolism. In addition, it can show adaptogenic effectiveness, increasing the body's tolerance to stress factors.

Synephrine Hydrochloride - synephrine has a similar structure to ephedrine. This substance is a natural substitute for ephedrine. It is more and more often added to medicines and dietary supplements intended for athletes as well as overweight people. This compound boosts metabolism, reduces appetite and at the same time increases mental and motor activity. Synephrine increases blood pressure and affects cardiac output. It widens the bronchi making it easier to breathe, effectively clears the sinuses and improves mood. 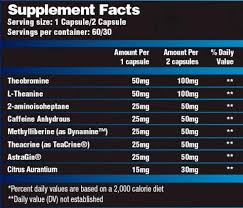