Liberty Labz Stand The F% # k Up is a new pre-workout from the USA, which will increase your endurance, provide incredible focus and provide energy for the whole day. The pre-workout supplement based on proven formulas is an ideal addition to your workout. Innovative, specially selected doses of ingredients will allow you to perform the most effective training, ensuring maximum sharpening of the senses, increasing aerobic capacity.

The patented Hydromax and Amentoflavone system ensures obtaining a specific, long-lasting muscle pump, will ensure proper hydration of the muscles promoting their growth. Astragin increases the absorption of ingredients contained in the preparation, maximizing profits at the gym. The active steroid found in Astragin (Rg1) improves regeneration after physical exercise, reduces inflammation and increases glycogen replenishment.

Precise formula of the best stimulants, mind enhancers improves the training performance by moving it to a higher level, reduces muscle soreness allowing for a really high level of training. In addition, the preparation increases mood, reduces anxiety, provides energy through the effects of dopamine and norepinephrine.

Vitamin B3 - supplementation with niacin also brings benefits for the immune system. Studies show that the systematic use of vitamin B3 leads to an increase in the number of neutrophils. These are white blood cells that allow the destruction of pathogenic microorganisms in the form of bacteria. Vitamin PP also leads to improved functionality of the central nervous system. The increase in activity in the mitochondrial nuclei, which are found in the nucleus accumbens, contributes to the improvement of the mental condition of a human being, which is manifested in: increased self-confidence, reduced effects of perceived stress and reduced anxiety.

Beta Alanine - is necessary for the production of carnosine and blocks building proteins that help prevent the aging of the body. The compound supports the proper functioning and development of muscles. Amino acid is known for reducing muscle fatigue, which can help your muscles work better during training. This in turn promotes muscle growth. Beta-Alanine is particularly helpful in intensive short-term training such as weight lifting. Some people taking beta-alanine may notice a slight tingling sensation known as paraesthesia. A tingling arises because beta-alanine dilates blood vessels, allowing more oxygen and blood to be delivered to the muscles.

N-Acetyl L-Tyrosine-acetylated derivative of the amino acid L-tyrosine. Ordinary L-tyrosine is less stable and also less soluble in water, which can lead to reduced bioavailability. Acetylation increases the solubility and stability of some amino acids. N-acetyl-L-tyrosine supports brain function by supporting the synthesis of catecholamin norepinephrine and dopamine (neurotransmitters).

Hydromax Glycerol Powder - a formula based on glycerol increases the volume of blood and improves the blood circulation of working muscles. The most important benefit of this substance for bodybuilders is the ability to bind and retain water. Glycerin, reaching the muscles, binds fluids, which makes the muscle more swollen and increases its efficiency. The mechanism of action of glycerol is similar to the binding of water through creatine. Along with the water, many substances with anabolic effects and hormones carried in the blood go to the muscles.

Caffeine Anhydrous - has a thermogenic effect and suppresses appetite due to the increase in the production of adrenaline and norepinephrine. It has been proven that it causes the formation of such neurotransmitters as dopamine, acetylcholine or even serotonin in the central nervous system, which exerts a stimulating effect and increases cognitive functions. The overall activity of caffeine on the body, allows you to maintain the effectiveness of training and maintain a positive mood, despite the calorie deficit.

2-Aminoisoheptane - is a stimulant that has other names such as 2-aminoisoheptane or octodrine. DMHA has a relaxant effect on the bronchi, thanks to which our aerobic capacity increases, furthermore it has a decongestant activity (narrowing blood vessels, causing an increase in the oxygen flow rate), does not cause "stupor" and sharpens the senses that could not always be experienced with dmaa.

Amentoflavone (Selaginella tamariscina extract) - effectively expands the blood vessels causing a huge sensation of the pump. By increasing the release of calcium from the sarcoplasmic reticulum, it supports muscle contraction and function. Increasing the concentration of cAMP enhances the lipolysis process. As an inhibitor of protein tyrosine phosphatase 1B (PTP1B), it supports the action of insulin. Strengthening the degradation of body fat and reducing the level of insulin resistance, it accelerates the weight loss process and helps maintain normal body mass.

N-Phenyethyldimethylamine HCL- Eria Jarensis substance similar in action to phenylethylamine (PEA). In contrast, PEA is characterized by a longer effect, because it is not so quickly broken down monoamine oxidase. It strongly affects the level of dopamine, which results in a characteristic increase in mood, along with increased energy, concentration and motivation.

Dimethylethanolamine - its main application is the improvement of mental state, concentration, concentration, alertness and memory. Beneficial effects of the relationship will be appreciated by both athletes who want to increase focus during competition or training, as well as students who want to improve the memorization of a large amount of information and concentration. In addition, another benefit of using the compound is to improve the overall mental state and well-being during the day.

Zembrin- also known as Kanna and under the name Sceletium Tortuosum is a herb that has long been used due to its psychoactive and analgesic properties. Sceletium tortuosum is traditionally used to reduce anxiety. Studies have shown that it inhibits the action of two proteins in the brain called PDE4 and 5-HT transporters, which are involved in generating the body's stress response. This is believed to be a mode of action, although there is some evidence that the plant extract may also inhibit serotonin reuptake, acting in a similar way as some antidepressants to reduce anxiety and improve well-being. In addition, the plant suppresses the appetite.

L-theanine is a non-protein amino acid found naturally in the leaves of green tea - camellia. It has psychoactive properties because it easily overcomes the blood-brain barrier. It stabilizes the mood, calms, relieves symptoms of stress and anxiety. Also used as a nootropic agent - improving cognitive functions, work efficiency and learning effectiveness. Researchers demonstrated the efficacy of Teanin in increasing attention, vigilance and productivity, and the effects are already evident within the first hour after administration

AstraGin- a patented blend of extracts from the bark of the phlegate and ginseng bark. In supplementation it is used because of the ability to increase the absorption of other active ingredients. In addition, it can also promote insulin sensitivity, favorably affecting the metabolism of carbohydrates. In addition, it can show adaptogenic efficiency, increasing the body's tolerance to stress factors. 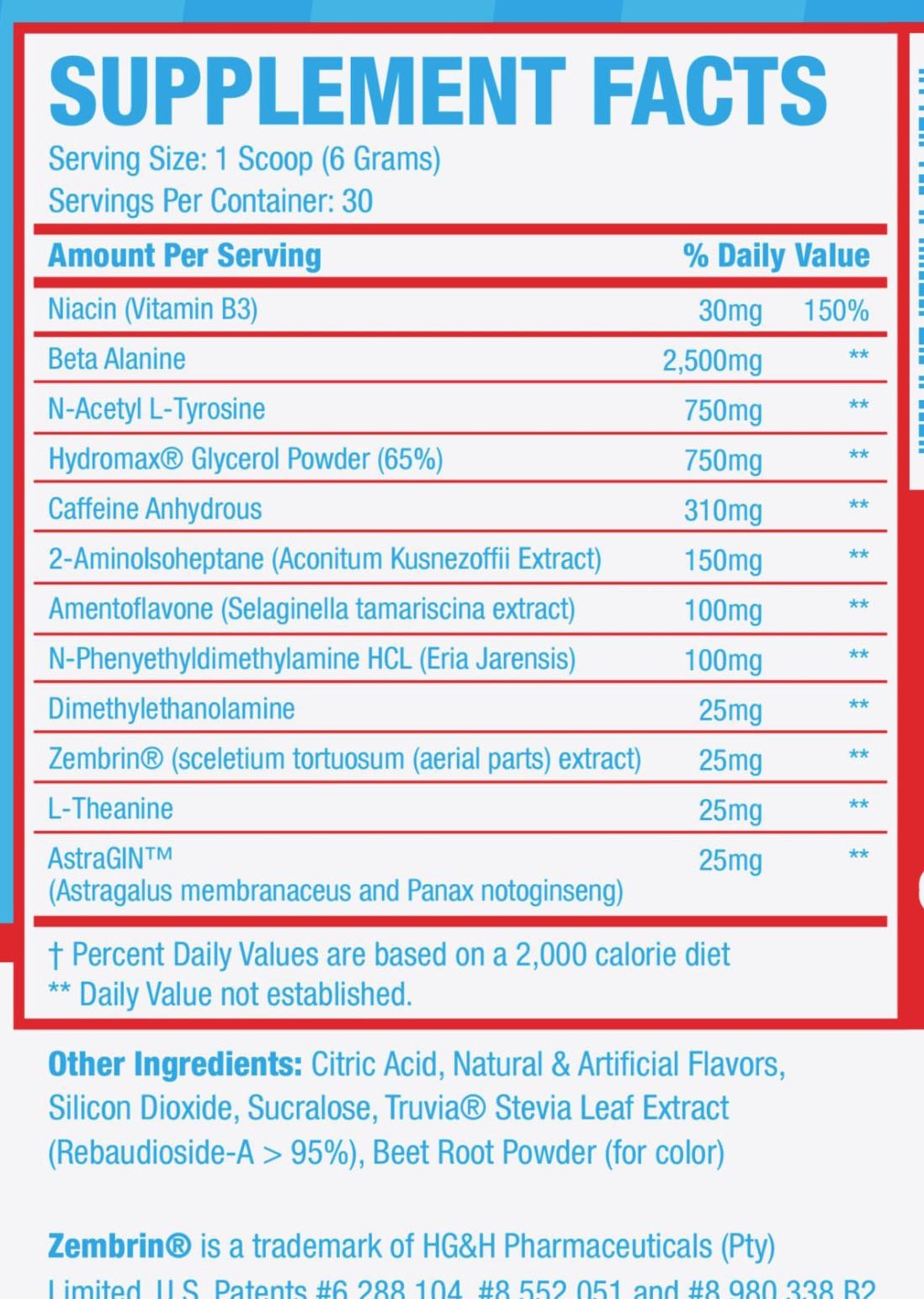 Users reviews
Number of reviews: 1 Average score: 3.00
Score:
Author: Karim, Warszawa
Great product same effect like 1,3 dmaa ,,,,, but why you&amp;amp;amp;#39;re lying about ingredients it&amp;amp;amp;#39;s not like in picture it&amp;amp;amp;#39;s 6 Gram serving and different Ing,,, also i order mango and got star berry. 3 stars for good effect ,,, and 2 minus for wrong information
To rate this product or to add a new review, you need to log in.
Recommended