Freedom Formulations Reign Thermogenic is a new fat burner with a thermogenic effect. It contains a blend of only the most effective ingredients with scientifically proven effectiveness, guaranteeing quick results. Formula enhanced with the addition of Noopept for the highest concentration, memory improvement and emotional improvement during difficult periods of reduction.

The fat burner is dedicated to people who like strong stimulants. Reign is a highly stimulating and advanced composition of effective ingredients accelerating the reduction of adipose tissue, highly energizing, with a strong focus effect. The combination of DMHA and yohimbine to the maximum extent support the intensification of fat reduction, even that resistant to burning around the abdomen, thighs and buttocks.

A properly selected set of thermogenic and lipolytic ingredients and substances with a stimulating effect increases the metabolic rate. The addition of the innovative ingredient Oleoylethanolamide OEA perfectly suppresses the appetite and provides a satiety effect, thanks to which you do not feel hungry.

Yohimbine - a substance that is helpful in the fight against the so-called resistant adipose tissue, located mainly in the thorax and lower waist areas in men and hips, buttocks and thighs in women. Yohimbine works by blocking α2 receptors, which clearly facilitates slimming and is helpful in sculpting body parts resistant to slimming. It is worth remembering that the effect of yohimbine is effectively eliminated by insulin. So taking this compound around carbohydrate meals is pointless. Yohimbine is especially effective when used on an empty stomach, before exercise.

Caffeine - has a thermogenic effect and suppresses appetite due to the increase in the production of adrenaline and norepinephrine. It has been proven that it causes an increase in the formation of neurotransmitters such as dopamine, acetylcholine or even serotonin in the central nervous system, which exerts a stimulating effect and increases cognitive functions. The overall effect of caffeine on the body allows you to maintain the effectiveness of training and maintain a positive mood, despite the caloric deficit.

DMHA - a strong stimulant with an effect similar to DMAA. It affects the central nervous system by increasing the level of dopamine and norepinephrine. Intensive workouts combined with the use of DMHA give phenomenal results in the form of suppressing appetite, reducing body fat, increasing memory and creativity, and reducing anxiety by preventing fatigue. The preparation is an interesting alternative for people who are delighted with the effects of DMAA, but show poor tolerance to this stimulant. The chemical structure of DMHA and DMAA is very similar, therefore their action is similar.

Higenamine - affects the production of nitric acid. Nitric acid affects the release of hormones and adrenaline. It is also certain that the product accelerates the regeneration time of the body, and also increases the amount of blood flowing, and thus the amount of nutrients supplied to the muscles is much greater Synephrine - it is obtained naturally, from unripe citrus fruits, e.g. Citrus uranium L., Citrus aurantium L. This substance is a natural substitute for ephedrine. It is increasingly added to drugs and dietary supplements intended for athletes and overweight people. This compound boosts metabolism, reduces appetite and at the same time increases mental and physical activity. Synephrine increases blood pressure and affects the cardiac output. It widens the bronchi, making it easier to breathe, effectively clears the sinuses and improves well-being.

Green Tea - owes its slimming properties to catechins, namely a substance called epigallocatechin gallate (EGCG). Catechins contained in green tea extract exert a significant influence on the reduction of adipose tissue. They inhibit the absorption of fats from food and increase their use by the body. In addition, green tea increases the activity of some enzymes responsible for the digestive process, has a positive effect on liver metabolism, increases thermogenesis and accelerates the oxidation of fats.

5 Htp- increases the level of serotonin, balances mood swings and helps with depression. In addition, it shortens the time of essential sleep (extending the REM phase), lowers appetite, thus helping to lose weight, lowers pain tolerance and is a natural remedy against migraine.

White Willow Bark - the most important active ingredient of white willow bark is salicinic acid, it was the discovery of this substance that initiated numerous studies, the result of which was the creation of a popular drug called aspirin (based on acetylsalicylic acid). White willow bark helps to restore mobility in "creaky" joints, and helps soothe inflammation and joint pain in people suffering from rheumatism and arthritis. In addition, as an aid in the prevention of heart attacks.

Oleoylethanolamide - is an endogenous agonist of the alpha receptor (PPAR-α) activated by peroxisome proliferators. This molecule is produced in the body, usually found in the gut. OEA can act as an endogenous neuroprotective agent, provides satiety and reduces appetite by limiting weight gain.

Noopept - is one of the nootropic agents that stimulate the central nervous system. Its unique properties lead to an increase in cognitive functions, memory improvement, and faster absorption of information. The relationship stimulates the connection between the brain's hemispheres. Noopept significantly contributes to the increase in creativity, efficiency and better functioning of thought processes. It is a great remedy for use during increased mental and physical activity of the body. Additionally, it has a protective effect against the harmful effects of free radicals, protecting neurons against external factors. Noopept turns out to be effective in regaining memory, problems with emotional instability and improving well-being. It is worth adding that it helps with disorders related to insomnia and restores healthy and restful sleep. Its beneficial properties lead to the activation of mental and memory processes, intelligence, motivation, and in the case of the need for maximum concentration in work and study.

Paradoxine - a formula containing Aframomum melegueta extract - Madagascar aframmon is a plant in West Africa. It is used as a substitute for pepper. It shows stimulating and diuretic properties by removing excess subcutaneous water from the body.

Cayenne - human studies confirm the slimming effect of capsaicin. Its regular intake causes changes in protein concentrations related to thermogenesis and fat metabolism. It slows down the transcription of protein genes that stimulate the accumulation of adipose tissue and stimulates the transcription of protein genes related to the thermogenesis process.

Bioperine is certainly one of the best ingredients. The goal of BioPerine is to increase the bioavailability of other ingredients.

Huperzine - one of the most amazing alkaloids used to increase the ability to remember. Hupercine A is one of the most desirable substances from the group of agents providing the so-called brain cheering. It allows us to achieve maximum concentration, focus and isolate our attention in almost every situation. It is perfect for people with very demanding mental work as well as students or high school graduates. Unlike many other stimulants that affect our mind, its effect does not weaken over time and we can benefit from hupercine supplementation for a very long time. 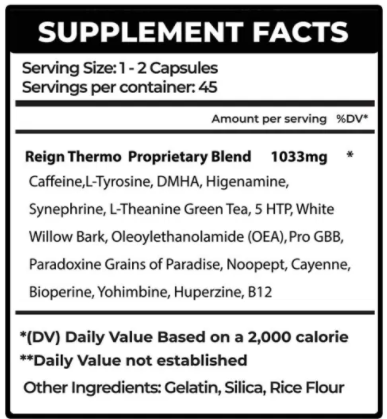