Prime Nutrition PWO MAX is a cult product well known to all fans of pre-workout supplements from the USA in the new version with the addition of DMHA. PWO-MAX is a complex product containing in its composition compounds supporting regeneration, accelerating anabolism and inhibiting catabolism. It adds energy, thanks to a powerful dose of agmatine, increases nitric oxide production, ensures proper muscle function, helps increase muscle strength and affects endurance. Thanks to this, it is perfect for use during the most difficult training sessions.

Beta-Alanine - the main function that this amino acid performs is not at all to increase the volume of muscle cells, but to increase the level of carnosine in the muscles. Effect? Both during aerobic and anaerobic efforts, the acidification process of skeletal muscles is significantly slowed down. In practice, this translates into harder, more intense and more effective workouts. Both endurance and muscle power increase.

Agmatine sulfate - agmatine effectively increases the secretion of nitric oxide in the human body, which translates into a strong muscle pump feeling during training. Vasodilation supports the supply of blood and nutrients to working muscles, which significantly accelerates the regeneration process and builds new muscle fibers. In studies using agmatine, it has been shown that its action can support protein synthesis even twice, which, in addition to the action of agmatine itself, is also associated with the action of increasing the supply of nutrients to muscle tissues.

N-Acetyl L-Tyrosine - an acetylated derivative of the L-tyrosine amino acid. Plain L-tyrosine is less stable and also less soluble in water, which can lead to reduced bioavailability. Acetylation increases the solubility and stability of some amino acids. N-acetyl-L-tyrosine supports brain function by supporting the synthesis of norepinephrine and dopamine (neurotransmitters) catecholamines.

Potassium Nitrate - a molecule that provides a huge dose of nitrates, compounds that increase nitric oxide levels very quickly. Nitrate accounts for 61%, and only 39% of potassium, so this makes the molecule a carrier of a large dose of nitrates. Potassium is also valuable because of its many health benefits, such as electrolytic effects, increasing physical performance and helping reduce dehydration-related cramps. By significantly increasing the amount of nitric oxide, you are able to do intense physical exercise without feeling tired and sore. In practice, this means that your endurance will be much greater after using the first portion. Another benefit is easier and deeper breathing during intense training. Another benefit of using nitrates is the intense vasodilation. This allows for a larger supply of blood, oxygen and nutrients to tired muscle cells. It gives a feeling of "pumping up" muscles and also helps in better regeneration.

Choline Bitartrate - choline participates in the creation and maintenance of normal cell structure, controlling muscle function, respiratory system, heart function and memory-related brain work. Research shows that choline improves long-term memory. Some specialists argue that a diet containing a large amount of absorbable choline (egg diet) can reduce the risk of dementia, dementia characteristic of Alzheimer's disease. Choline also assigns a role in reducing the risk of developing cancer. In addition, choline is involved in the regulation of lipid metabolism.

DMAE - determines proper neuromuscular communication (which is important for athletes who need to show full speed and reflex), is responsible for motor functions, memory, attention, association and learning, and raising its level increases the quality of memory tests and intelligence.

Caffeine Citrate - has recently gained popularity in the fitness environment because it increases caffeine levels in the blood faster than other sources of caffeine.

2-Aminoisoheptane HCL - is a stimulant that has other names, such as dmha or octodrine. DMHA works bronchodilator, which increases our aerobic capacity, in addition, it has decongestant activity (narrowing of blood vessels, causing an increase in the rate of oxygen flow), does not cause "stupidity" and sharpens the senses which could not always be experienced with dmaa.

1 serving 15-30 minutes before training. Do not exceed the recommended dose. 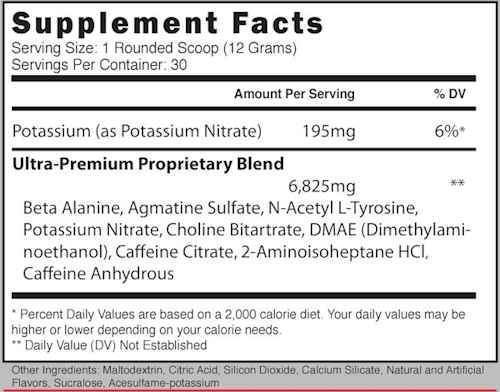 Users reviews
Number of reviews: 1 Average score: 5.00
Score:
Author: Wolf, 75000
Good bulk product ! rep
To rate this product or to add a new review, you need to log in.
Recommended