Advanced formula rich in the patented formula AMPiberry, Yohimbine, OxyGold, and other stimulants: Caffeine, Theobromine, as well as a natural diuretic - Dandelion extract. The burner provides high energy during the day, even despite the caloric deficit. The supplement ensures a good mood during the day, supporting a difficult reduction period. The use of the burner allows you to lose weight in a short time.

Ampiberry - a proprietary name of a product developed on the basis of the fruit extract of Juniperus communis L., an evergreen tree from the Cupressaceae family that grows abundantly in areas of the globe with a cooler climate, especially in the mountainous area of ​​Himachal Pradesh located in India. Due to direct antioxidant properties and indirect ones caused by increasing the concentration of superoxide dismutase, catalase and glutathione peroxidase, it has an anti-apoptotic effect in the nervous system. It reduces inflammation and reduces the feeling of pain, including headache. By interfering with the neuronal excitability, it reduces the feeling of fatigue and discouragement, motivating the body to continue working. It shows synergism of action with caffeine.

Theobromine Anhydrous - theobromine is a substance found mainly in cocoa beans, popular yerba mate, coffee or tea. Its main features include diuretic, antihypertensive and thermogenic properties, especially in combination with caffeine and polyphenols. This substance stimulates the heart and dilates blood vessels, thanks to which it has a presumed blood pressure-lowering effect (however, it has not yet been clearly confirmed by tests). Thanks to the use of Theobromine StimTropic, it also positively affects the definition of muscles.

Dandelion Root Extract - is a very strong diuretic (dehydrating substance). It is the most powerful herb that helps get rid of subcutaneous water. In addition, it is credited with detoxifying and cleansing properties, and it speeds up metabolism. Its root contains large amounts of mineral salts, especially potassium, organic acids, sterols, inulin and choline.

Grains of Paradise - the extract acts agonistically on TRPV1 receptors and increases the production of adrenaline and noradrenaline, promotes lipolysis, thanks to which it releases energy substrates necessary to maintain the continuity of the muscles involved in physical effort. By intensifying the degradation of previously accumulated adipose tissue, increasing the efficiency of thermogenesis taking place in brown adipose tissue. It promotes the appropriate hormonal environment by increasing testosterone synthesis and, acting anti-estrogenic, supports the shaping of the appropriate body composition. By leading to strong excitation of TRPV1 and TRPA1 receptors, it causes limiting their activity, which reduces the amount of pain experienced.

OxyGold Fulvic Acid - the registered name of fulvic acid, showing the ability to increase energy levels. It promotes the efficiency of cell functioning. It also protects them, demonstrating antioxidant activity. Fulvic acid is also used as an agent to reduce pain and promote cognitive abilities.

Rauwolfia Vomitoria Extract - plants from the Apocynaceae family, a shrub that naturally grows in tropical regions of Africa, brought to other continents, including Asia. It has antioxidant, anti-inflammatory, analgesic properties, supports the carbohydrate-insulin metabolism, prevents cancerous processes and improves mental condition. The high standardization of the rauwolscine extract, also known as alpha yohimbine or isoohimbine, focuses the product's action on the nervous system and the loss of unnecessary body weight. By interfering with the work of the cholinergic system, it increases the concentration of adrenaline, stimulating the system to function and intensifying the lipolysis process. By reducing the activity of α2-adrenergic receptors, it increases the amount of adenylate cyclase and cyclic adenosine-3 ′, 5′-monophosphate (cAMP), enhancing fatty acid oxidation in mitochondria. It promotes the burning of previously accumulated fat in the areas of the body rich in α2-adrenergic receptors, mainly in the lower abdomen and on the hips.

1 capsule with a meal. 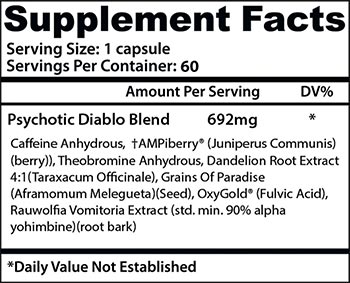