Phase One's Pre Phase Remix formula will help you increase the effectiveness of your training, which translates into improved sports performance.

Each serving of Pre-Phase Remix contains as much as 7,000 milligrams of L-citrulline malate increasing the concentration of nitric oxide and 3200 mg of beta alanine supporting the development of muscle mass.

L-Citrulline Malate - citrulline malate participates in the synthesis of nitric oxide (NO) and phosphocreatine and the oxygen metabolism of glucose, thereby increasing the uptake of oxygen, glucose, amino acids and creatine and energy production by muscle cells. It reduces the concentration of lactic acid and ammonia in the muscles, allowing the body to recover energy faster by increasing the level of creatine phosphate and re-synthesizing ATP. Citrulline malate is a much more effective form than high doses of arginine, as it is its precursor. At the same dose as arginine, it is more effective in increasing its amount in the body than arginine alone.

Betaine Anhydrous - it helps to increase the body's efficiency and improve the work of the nervous system. An additional advantage related to the use of betaine is better cell hydration. Like glycine, betaine draws water with it when it is absorbed into the cell. This results in better hydration of the body and an increase in the feeling of a muscle pump during training. The main intracellular transporter of trimethylglycine in the body is the BGT-1 transporter. In addition, betaine stimulates the production of the vasodilator - nitric oxide. In general, the ingredient provides better blood supply to the muscles and their nutrition.

Nitrosigine - nitrosyline is a patented arginine and silicon complex that increases muscle performance. The substance significantly increases the production of nitric oxide, intensifying the feeling of a muscle pump. An advanced component of pre-workout supplements that increases blood flow and energizes for exhausting workouts.

S7 - a mixture of seven plant ingredients increasing the amount of nitric oxide (NO) by 230%. It acts as a vasodilator, thereby increasing blood flow. It helps athletes to provide more oxygen and key nutrients for muscle work during training.

Caffeine Anhydrous - has a thermogenic effect and suppresses appetite due to the increase in the production of adrenaline and norepinephrine. It has been proven that it causes an increase in the formation of such neurotransmitters in the central nervous system as dopamine, acetylcholine or even serotonin, which exerts a stimulating effect and increases cognitive functions. The overall effect of caffeine on the body allows you to maintain the effectiveness of training and a positive mood, despite the caloric deficit.

N, N-Dimethylphenethylaine Citrate - can help increase the amount of norepinephrine and dopamine in the body. Norepinephrine is one of the two main hormones that are found in large amounts during stress. As a neurotransmitter, it can affect the sympathetic nervous system. Norepinephrine triggers the release of glucose from glycogen. Blood flow to the skeletal muscles also increases. This can lead to improved oxygenation and blood energy utilization. Thanks to the use of this compound, you can lift more weights in the gym for longer. In addition, it helps to focus during training, increases concentration and allows you to make quick reactions.

Infinergy DiCaffeine Malate - is a buffered version of caffeine, which has the same stimulating effect of caffeine, while protecting the stomach from the disorders that can occur with anhydrous caffeine. In particular, malic acid works to improve the function of the gastrointestinal tract and stomach, while also playing an important role in the Krebs cycle. Infinergy helps reduce fatigue, improve concentration, increase physical fitness and accelerate the thermogenesis process. In particular, it reduces sedation and relaxation by inhibiting the production of adenosine, a chemical related to sleep. It causes an increase in wakefulness, concentration, better body coordination and an increase in efficiency during training.

N-Methyl Tyramine Hcl - a compound extracted from the fruit of bitter orange or barley. N-methyl-tryamine (NMT) is formed by adding a "methyl" group to the well-known biogenic amine, L-Tyramine. No, it is not a synthetic ingredient. Plants can actually make NMT using the enzyme tyramine N-methyltransferase. Extracting NMT from plants is cheaper than synthesizing NMT. Its action is based on the stimulation of beta receptors, which play a significant role in the fat burning process. In addition, the compound has an anabolic effect, increases blood flow to the muscles and increases the efficiency of cells in burning glucose.

Cocoabutterol (Cocoa Extract) - theobromine is a substance found mainly in cocoa beans, popular yerba mate, coffee or tea. Its main features include diuretic, antihypertensive and thermogenic properties, especially in combination with caffeine and polyphenols. This substance stimulates the heart and dilates blood vessels, thanks to which it has a presumed blood pressure lowering effect (however, it has not yet been clearly confirmed by tests).

The mixture of strong stimulants and nitric oxide boosters is a perfect combination of ingredients contributing to the progress at the gym. 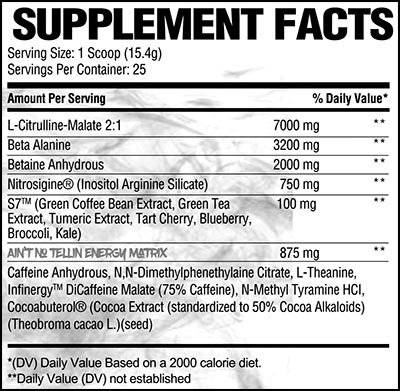