Magnum Pre-Fo is a new pre-workout with stimulating effect, maximizing the level of energy and training endurance. The pre-workout preparation allows you to maximally increase the muscle pump, increase cellular metabolism. Thanks to nootropic supplements, you will increase focus and cognitive abilities. Citrulline in the form of malate affects the creation of a more powerful muscle pump. ALCAR allows the growth of acetylcholine and dopamine responsible for motivation to act, it also accelerates muscle regeneration.

Pine extract is a natural blood flow booster, improving its transport by as much as 78%. Bacopa Monnieri regulates serotonin and dopamine levels, increases energy and concentration. L-Theanine naturally reduces stress and anxiety. Intensifying the action of other nootropic substances. Bitter orange with 30% synephrine content affects fat loss by stimulating beta-3 receptors. The pre-workout supplement is recommended for people expecting the maximum increase in energy needed for hard training.

Reliable focus, huge muscle pump, improvement of well-being without side effects make Magnum Preform one of the better pre-workout products, especially for people who like pre-workout no crash (without feeling of physical fatigue and malaise after training).

Citrulline Malate is a combination of the amino acid - citrulline with malic acid. Citrulline, despite not building muscle, has an important biological function by participating in the urea cycle. During metabolism, citrulline neutralizes toxic ammonia. Citrulline malate is a compound that increases nitric oxide production and thus increases blood flow to muscles during training by causing a muscle pump. Studies show that citrulline malate given before training improves the body's ability to exercise and reduces fatigue. Another advantage of using the preparation is its ability to re-uptake of bicarbonate by the kidneys, which has a beneficial effect on the cash-base balance. In addition, the use of the supplement effectively reduces muscle acidification after a hard workout.

Acetyl-L-Carnitine- is the acetylated and metabolically active form of the amino acid L-carnitine - a vitamin-like substance. Its main properties include nootropic, neuroprotective, antioxidant and promoting fat metabolism in mitochondria. In addition, Acetylcarnitine positively affects the condition of the circulatory system and tissue sensitivity to insulin; also reduces fatigue. The substance also participates in the regulation of hormonal balance - it mainly affects testosterone and cortisol levels. It is recommended primarily to physically active people, working mentally and exposed to intensive use of the nervous system combined with stress. Acetylcarnitine will also work great as a prevention and support for male infertility treatment and as part of therapy in the case of depressive conditions. It also provides excellent support for the process of reducing body fat.

Agmatine Sulphate - agmatine increases blood flow by supporting the process of "cleansing" of working muscles. In each cell, there is a specific exchange of oxygen and nutrients for carbon dioxide and harmful metabolic products that the body must remove, and due to increased blood flow, such exchange occurs faster so that muscle tissue cells can work longer and harder. Arterial blood contains oxygen necessary for muscle work and provides nutrients such as amino acids, sugars, creatine, and external arginine. Thanks to the action of nitric oxide, body transport is more efficient, thanks to which not only cells receive nutrients, but harmful waste products are removed faster.

French Pine Bark Extract - pine bark extract is a Mediterranean, fast-growing pine species, thick and durable. Otherwise called sea pine or pinus pinaster, this orange tree provides bark that contains various bioactive compounds. A high amount of phenolic acids can be found in this extract. In addition, it also contains proanthocyanidins and catechins, which makes Pine Bark extract similar to green tea and grape seed extracts. Due to its nutritional value, PBE is a powerful antioxidant that is capable of capturing free radicals and reducing oxidative stress. Additionally, it contains alpha-glucosidase, which helps in the digestion of carbohydrates, and therefore can provide a lowering effect of glucose. Some studies show that it increases testosterone levels and prevents erectile dysfunction.

Bacopa Monnieri Extract - herb of Ayurvedic medicine. It is recommended in states of increased cognitive effort, to improve memory and concentration, in states of depression, reduced libido and for the elderly showing symptoms of dementia and confusion. Due to adaptogenic, stimulating the formation of new proteins and anti-inflammatory, it works great after strokes and brain injuries. It has strong antioxidant properties, effectively sweeps free radicals, thanks to which it inhibits cancer processes and supports tissue regeneration and renewal.

L-Theanine- is a non-protein amino acid found naturally in green tea leaves - camellia. Has psychoactive properties because it easily overcomes the blood-brain barrier. It stabilizes the mood, calms down, relieves the symptoms of stress and anxiety. Also used as a nootropic agent - improving cognitive functions, work efficiency and learning effectiveness. Researchers have proven theanine's effectiveness in increasing concentration, alertness and productivity, and the effects are already visible within the first hour after administration.

Caffeine Anhydrous- is an anhydrous form of caffeine from the group of organic compounds. It blocks adenosine receptors in the brain, which results in the reduction of tiredness during training. Due to its thermogenic effect, it effectively burns fat and improves metabolism.

Dicaffeine Malate - stimulates the central nervous system and vegetative centers: respiratory, vasomotor and vagus nerve. It also has an excellent thermogenic effect, converting calories to heat, significantly increasing the metabolic rate. It evenly stimulates the cerebral cortex, which means increasing thinking efficiency and preventing fatigue. It reduces the risk of liver and colorectal cancer, and also stimulates the release of fatty acids into the bloodstream, making it one of the ingredients that accelerate slimming.

Bitter Orange Extract - bitter orange is not an edible fruit but it is an excellent source of vitamin C, the amount of which in the extract can reach up to 42%. Bitter oranges are much richer not only in vitamin C but also in antioxidants, e.g. bioflavonoids such as hesperidin, compared to regular oranges. In addition to the high content of highly absorbable vitamin C, bitter orange is primarily known for its content in the synephrine plant, which is a natural substitute for ephedrine. Synephrine has a similar structure to ephedrine. It is obtained naturally from unripe citrus fruits, e.g. Citrus uranium L., Citrus aurantium L. This substance is a natural substitute for ephedrine. It is more and more often added to medicines and dietary supplements intended for athletes as well as overweight people. This compound boosts metabolism, reduces appetite and at the same time increases mental and motor activity. Synephrine increases blood pressure and affects cardiac output. It widens the bronchi making it easier to breathe, effectively clears the sinuses and improves mood. 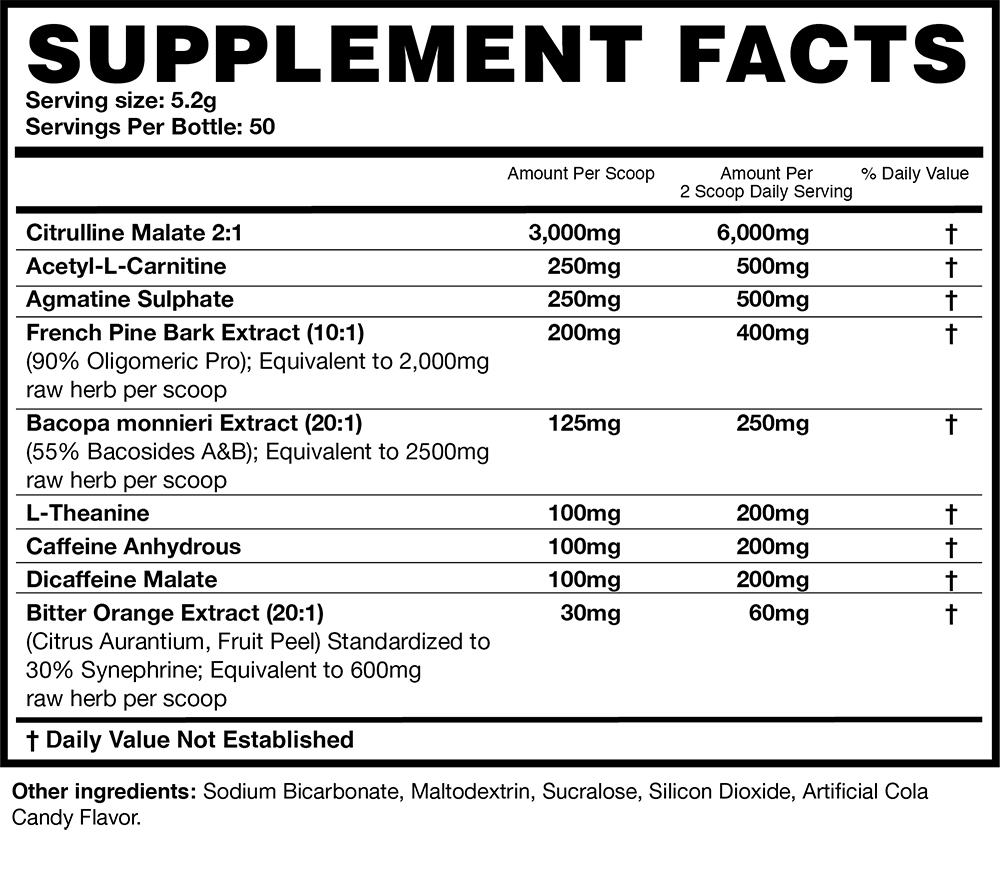 Users reviews
Number of reviews: 1 Average score: 4.00
Score:
Author: Ibrahim, Paris
Bon pré workour
To rate this product or to add a new review, you need to log in.
Recommended