Try One Phoenix Fat Burner, one of the strongest stimulating fat reducers on the market!

One Phoenix is ​​a new, powerful fat burner containing complex ingredients supporting fat loss. A real hit when it comes to the visual effects of cutting the figure. Perfect for photo sessions and the final stage of fat reduction. Perfect as a burner that reduces body fat to a minimum.

One Phoenix is ​​a real, breakthrough formula of a preparation reducing body fat with DMAA. The burner provides quick reduction effects of unnecessary fat, especially in places resistant to fat loss such as the abdomen, thighs and buttocks - this is mainly due to the already famous yohimbine. The use of the product affects the training energy and increases the level of concentration thanks to the addition of Hupercine. Due to the extremely strong effect, the preparation is recommended for advanced athletes who have experience with the use of strong stimulants.

The Phoenix fat burner perfectly inhibits the deposition of adipose tissue, increases the body's efficiency, promotes cognitive function and increases the synthesis of dopamine. The ingredients contained in the preparation allow you to get a slim figure and improve your well-being during the day.

DMAA - Also known as geranium. A very strong stimulant. It increases the process of reducing body fat, and is also helpful in increasing the intensity of training. It is a naturally occurring compound with an action similar to adrenaline. The ingredient is an excellent source of additional energy. Geranium also influences the pathways responsible for controlling appetite and exerts a thermogenic effect.

Synephrine HCL - has a structure similar to ephedrine. It is obtained naturally from unripe citrus fruits, eg Citrus uranium L., Citrus aurantium L. This substance is a natural substitute for ephedrine. It is more and more often added to drugs and dietary supplements intended for athletes and overweight people. This compound boosts metabolism, reduces appetite and at the same time increases mental and physical activity. Synephrine increases blood pressure and affects the cardiac output. It widens the bronchi making it easier to breathe, effectively clears the sinuses and improves well-being.

Alpha Yohimbe - by counteracting the activation of α2-adrenergic receptors, modulates the concentration of neurotransmitters and cAMP, thanks to which it increases the body's ability to release and burn previously accumulated energy substrate reserves. Deactivation of α2-adrenergic receptors, the high concentration of which is concentrated in the lower abdomen and hips, allows you to accelerate the loss of unnecessary fat from the aforementioned, relatively resistant to getting rid of residual fat, areas of the body.

Huperzine A - one of the most amazing alkaloids used to increase the ability to remember. Hupercine A is one of the most desirable substances from the group of agents providing the so-called brain cheering. It allows you to achieve maximum concentration, focus and isolate our attention in almost every situation. It is perfect for people with very demanding mental work as well as students or high school graduates. Unlike many other stimulants that affect our mind, its effect does not weaken over time and we can benefit from hupercine supplementation for a very long time.

Cayenne - the main active ingredient of Capsicum frutescens is capsaicin, which is famous for its pungent taste. This organic chemical compound has an analgesic, antioxidant, antibacterial and hypotensive effect, and by influencing thermoregulation and fat metabolism, it supports the reduction of adipose tissue. The latest reports also mention its gastroprotective and anti-cancer properties.

1 capsule on an empty stomach. 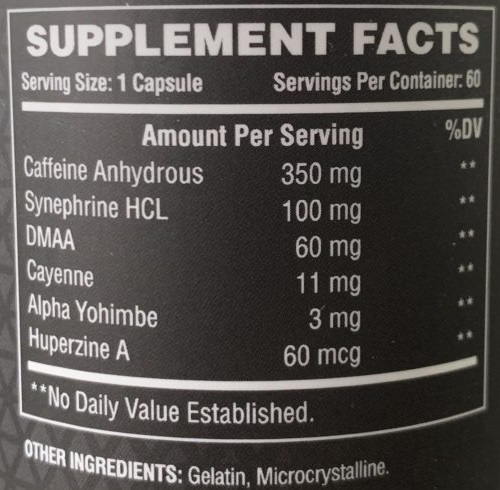