Atlas Labs Phenta Inferno is a new hardcore pre-workout, rich in ingredients with an intensely stimulating effect. It contains, among others: DMAA, Synephrine, Anhydrous Caffeine, Hordenine, Beta Alanine, Agmatine. The pre-workout is designed to increase focus, increase the metabolic rate, reduce appetite and accelerate the loss of unnecessary body fat.

The supplement has a strong energizing and stimulating effect thanks to the high dose of geranium. The preparation allows you to increase strength, build muscle mass and reduce body fat at the same time, suppressing the appetite and intensifying lipolysis. Phenta Inferno with DMAA provides exceptional stimulation, extraordinary training energy and improves endurance in the gym.

DMAA - works great both as a stimulant and as a fat burner, especially in combination with caffeine and other substances that stimulate the nervous system and intensify the phenomenon of thermogenesis. This powerful active ingredient is effective in providing strong stimulation. It indirectly stimulates the increase of adrenaline in the body and directly activates adrenergic receptors. Provides a strong increase in energy, stimulation and concentration. When combined with caffeine, its effectiveness increases. After penetrating the nervous system, Geranium stimulates the release of dopamine, thanks to which it ensures focus and a good mood, which is key during training.

Synephrine - synephrine has a similar structure to ephedrine. It is obtained from unripe citrus fruits, eg Citrus uranium L., Citrus aurantium L. This substance is a natural substitute for ephedrine. It is increasingly added to drugs and dietary supplements intended for athletes and overweight people. This compound not only boosts metabolism, reduces appetite, but also increases mental and physical activity. Synephrine increases blood pressure and affects the cardiac output. It widens the bronchi, making it easier to breathe, effectively clears the sinuses and improves well-being.

Niacin - contained in the Phenta Inferno supplement is extremely important for the functioning of the peripheral nervous system. Niacin increases the activity of mitochondria. In addition, it contributes to the proper maintenance of cholesterol in the blood, and also participates in the synthesis of sex hormones: insulin, cortisol and thyroxine.

Hordenine HCL - is a natural phenylethylamine compound that is present in small amounts in various plants. This supplement works primarily by releasing and protecting norepinephrine, which translates into an increase in metabolism, energy supply, and a decrease in appetite. Users use Hordenine for three main effects: fat loss, appetite control, and energy boost. It is used by pre-workout bodybuilders in combination with PEA (phenylethylamine) for synergistic effects.

Taurine - this amino acid increases the endurance of the body and counteracts the symptoms of fatigue, and also improves our concentration. Taurine enables faster and more effective post-workout regeneration. Another important feature of this amino acid is that it reduces the negative effects of stress while we are on a reduction and following a low-carbohydrate diet. Taurine is also anti-catabolic and supports the transport of creatine.

Start the dosage with ½ scoops to test the tolerance to ingredients, then 1 scoop before training. 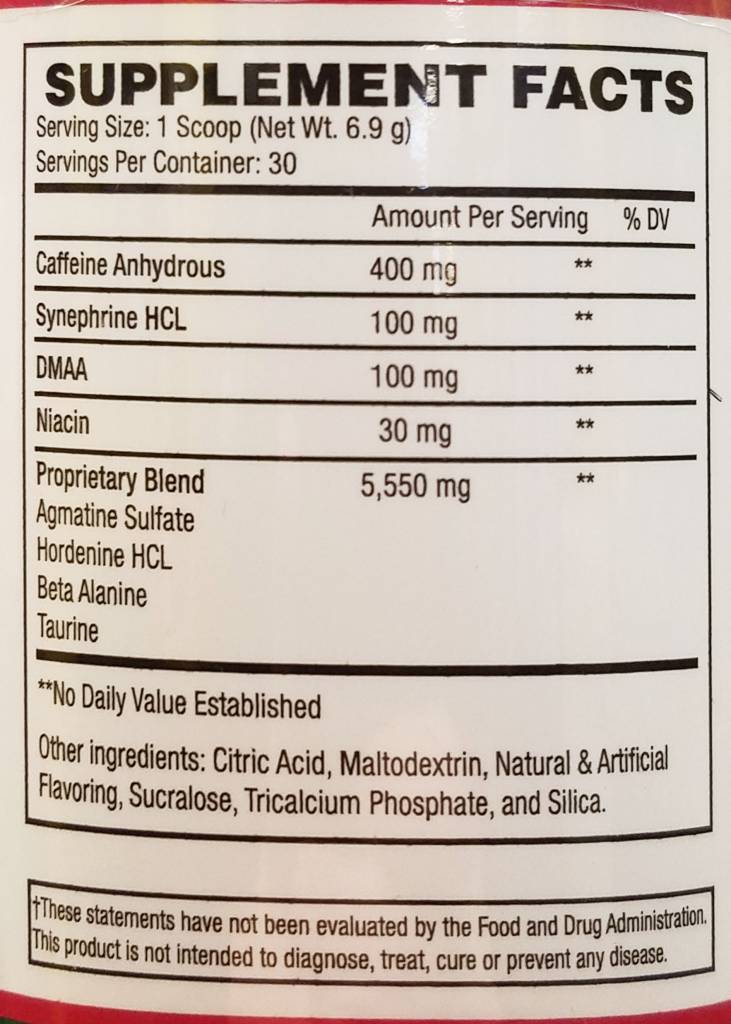 Users reviews
Number of reviews: 1 Average score: 5.00
Score:
Author: Jonh, Waverley House
The best pre-workout i've had in a log time. Mega power and endurance in training! suppresses appetite! COOL!!
To rate this product or to add a new review, you need to log in.
Recommended