SNS Phenibut is a supplement containing as much as 500mg of active phenibut per capsule. Chemical structure Phenibut is a modified version of the GABA neurotransmitter with an added phenyl group molecule. The use of this ingredients can lead to cognitive improvement and naturally reduces stress and anxiety. This supplement ensures a natural mental balance without showing any adverse effects on psychomotor functions.

It is one of the best supplements for people who are learning, working mentally, during periods of intense physical and mental effort, as well as for those who cannot cope with the daily fast life accompanied by stress and anxiety. The manufacturer's SNS phenibut is a chemical that is largely responsible for shutting down the brain when it is too excited or aroused. Chemically speaking, when the brain is excited, too many neurons act simultaneously. When too much stressed, the neurons seem almost unable to yield. GABA comes to the rescue and is able to reduce this over-activity, resulting in less stimulation and a reduction in symptoms of anxiety and stress.

Phenibut is one of the so-called nootropics and has many satisfied users who praise its effectiveness in dealing with nervousness, generally allowing you to relax and feel better. It is one of the most-used supplements with nootropic effects.

Using the product late in the evening facilitates a good night's sleep and enables lucid dreaming. This supplement provides many beneficial effects of use, which include, among others: improving memory, learning, concentration, and even making important decisions.

Phenibut as a dietary supplement is also administered in the medical world as a panacea for various body dysfunctions. In Russia and some other European countries, Phenibut is often prescribed by doctors as a remedy for sleep disorders, insomnia and anxiety. 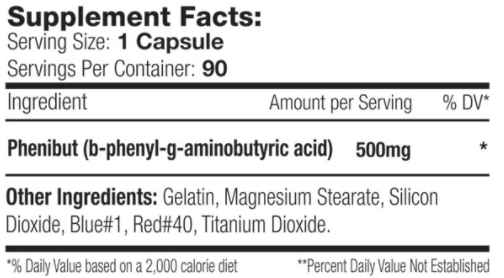