Cartel Labz Omerta Cartel Labz the new hardcore pre-workout is a combination of DMAA and DMHA!

Omerta is a pre-workout booster by Cartel Labz, which supports daily workouts ensuring you achieve above-average energy and strength. This supplement allows you to increase endurance and training performance, thanks to which you can perform long-term workouts. A high dose of DMAA and DMHA allows you to reduce the level of fatigue even during the most difficult training session.
Thanks to geranium you will gain more energy during training and strength. You will also accelerate fat burning. DMAA in combination with the ingredient DMHA allows you to increase training efficiency by up to 40%. Omerta has been supplemented with stimulating ingredients: caffeine, synephrine and yohimbine for synergy of action. Pre-workout is conducive to building muscle mass while losing fat.

Find out about the strong ingredients of the Omerta pre-workout:

DMAA - works great both as a stimulant and as a fat burner, especially in combination with caffeine and other substances that stimulate the nervous system and intensify the phenomenon of thermogenesis. This potent active substance is effective in providing strong stimulation. It indirectly stimulates the increase of adrenaline levels in the body and directly activates adrenergic receptors. Provides a strong increase in energy, arousal and concentration. When combined with caffeine, its effectiveness increases. After penetrating the nervous system, Geranium stimulates the release of dopamine, thanks to which it ensures focus and a good mood, which is key during training.

Citrulline Malate - participates in the synthesis of nitric oxide (NO) and phosphocreatine as well as the oxygen metabolism of glucose, thus increasing the uptake of oxygen, glucose, amino acids and creatine and energy production by muscle cells. It reduces the concentration of lactic acid and ammonia in the muscles, allowing the body to recover energy faster by increasing the level of creatine phosphate and re-synthesizing ATP. Citrulline malate is a much more effective form than high doses of arginine, as it is its precursor. At the same dose as arginine, it is more effective in increasing its amount in the body than arginine alone.

Higenamine - an alkaloid obtained mainly from the seeds of Nelumbo Nucfera - the common lotus, in small amounts it can also be found in coffee. It shows a synergistic effect to NMT, causing the release of norepinephrine and adrenaline into the blood, which results in the expansion of the respiratory tract and thus increasing the body's efficiency. The compound acts as a stimulant, increasing energy and alertness. Higenamine reduces oxidative stress by protecting the body against free radicals.

DMHA - is a stimulant that has other names such as dmha or octodrine. DMHA relaxes the bronchi, thanks to which our aerobic capacity increases, and also exhibits a contractile activity (narrowing of blood vessels, causing an increase in the rate of oxygen flow), does not cause "stupor" and sharpens the senses, which could not always be experienced with dmaa.

Hordenine - is a natural phenylethylamine compound that occurs in small amounts in various plants. This supplement works primarily by releasing and protecting norepinephrine, which translates into an increase in metabolism, energy supply, and a decrease in appetite. Users use Hordenine for three main effects: fat loss, appetite control, and energy boost

Schisandra Chinensis - is a plant whose fruits contain lignans and triterpenoids, which to some extent have the ability to improve the body's efficiency and have an adaptogenic effect. The use of the extract of this plant stimulates the secretion of dopamine, which effectively improves cognitive functions and motivation to train.

Yohimbine HCL - has antioxidant, anti-inflammatory, analgesic properties, supports the carbohydrate and insulin metabolism, prevents cancer and improves mental condition. High standardization of rauwolscine extract, also known as alpha yohimbine or isoohimbine. It focuses the action of the product on the nervous system and the loss of unnecessary body weight. By interfering with the work of the cholinergic system, it increases the concentration of adrenaline, stimulating the system to function and intensifying the lipolysis process. By intensifying the oxidation of fatty acids in the mitochondria. It promotes the burning of previously accumulated fat in the areas of the body rich in α2-adrenergic receptors, mainly in the lower abdomen and on the hips.

HuperzineA - an alkaloid with the ability to penetrate the blood-brain barrier, which is a negative catalyst for the decomposition of acetylcholine, improves nerve conduction and has a significant impact on concentration, association and memory. It helps to alleviate the effects of oxygen stress, prevents depression and has neuroprotective properties that improve well-being. In sports supplementation, it is recommended in the pre-training and pre-exercise periods and during exercise, in order to improve concentration.

AAKG - is used as a pre-training preparation, dilating blood vessels, as well as a supplement that enhances NO synthesis in order to increase muscle volume and increases the muscle pump during training. The preparation can be successfully combined with any favorite pre-training supplement in order to obtain synergistic effects. AAKG is recommended for general health and wellness. It supports the proper level of blood pressure and strengthens sexual functions.

Methylxanthine Anhydrous - in combination with caffeine malate known as Infinergy. It is a buffered version of caffeine that produces the same stimulating effects of caffeine while protecting the stomach from the disturbances that can occur with anhydrous caffeine. In particular, malic acid works to improve the function of the gastrointestinal tract and stomach, and at the same time plays an important role in the Krebs cycle. It helps reduce fatigue, improve concentration, increase physical performance and accelerate the thermogenesis process.

Vitamin B12 - belongs to the group of vitamins that are soluble in water. It is known by other names: cobalamin or cyanocobalamin. It is not a single substance, but a chemical compound containing, inter alia, cobalt. Vitamin B12 deficiencies are particularly dangerous and concern mainly the mental sphere, the nervous system and the hematopoietic system. Vitamin B12 acts as a non-protein component of the enzyme necessary for its activity in the production of monoamine neurotransmitters important for the brain: dopamine, serotonin and norepinephrine.

Magnesium - the most important function of magnesium is its participation in energy management and energy production. Thanks to it, we can obtain energy and building blocks for our cells from consumed and properly digested meals. This element affects the transformation of both carbohydrates and fats, and at the cell level it regulates the synthesis of the basic high-energy compound, which is ATP.

Calcium - is the basic mineral component that influences, inter alia, the maintenance of the electrolyte balance of the body necessary for its proper functioning. It is an important component of bone tissue and is essential for its proper development, as well as for the efficient functioning of nerves, muscles and heart.

Vitamin C - is one of the most powerful water-soluble antioxidants known to man, which protects body fluids from free oxygen radicals. It affects the production and preservation of collagen from which connective tissue is produced. The name of this tissue comes from the role it plays in our body, because it connects various cells, it has an influence on the maintenance of their shape and efficient functioning. Collagen is found in the bones (including the vertebrae of the spine), the cornea of ​​the eye, teeth, tendons, muscles, joints, skin and blood vessels.

Agmatine Sulfate - intensifies the secretion of nitric oxide in the human body, which translates into a strong muscle pump feeling during training. It expands blood vessels, supporting the supply of blood and nutrients to working muscles, which significantly accelerates the regeneration process and building new muscle fibers. In studies with the use of agmatine, it has been shown that its action can promote protein synthesis even twice, which, in addition to the action of agmatine itself, is also associated with the action of increasing the supply of nutrients to muscle tissues.

Synephrine - synephrine has a similar structure to ephedrine. It is obtained naturally from unripe citrus fruits, eg Citrus uranium L., Citrus aurantium L. This substance is a natural substitute for ephedrine. It is more and more often added to drugs and dietary supplements intended for athletes and overweight people. This compound boosts metabolism, reduces appetite and at the same time increases mental and physical activity. Synephrine increases blood pressure and affects the cardiac output. It widens the bronchi making it easier to breathe, effectively clears the sinuses and improves well-being. 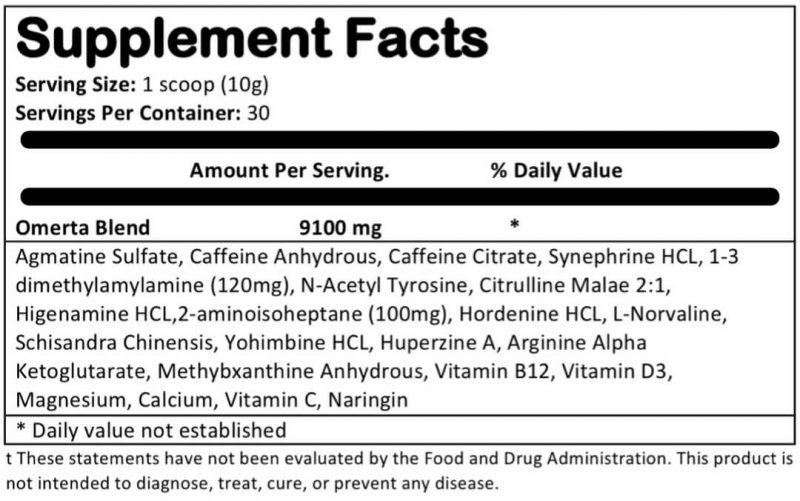